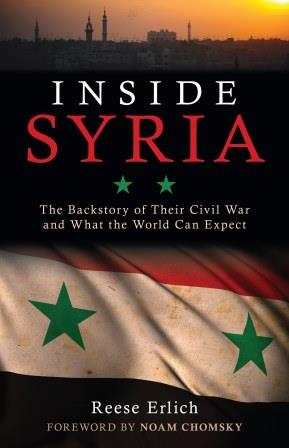 Reese Erlich’s informative and insightful book Inside Syria brings to mind the Greek myth of a vast maze under the palace at Knossos, with one exception: King Minos’ labyrinth on Crete concealed a single Minotaur, whereas Syria is teeming with the beasts.

Erlich has spent almost three decades reporting from the Middle East, and he brings his considerable knowledge of the region into this analysis of the Syrian civil war. A winner of the Peabody Award and the Society of Professional Journalists’ explanatory journalism award for his radio documentary “Inside the Syrian Revolution,” Erlich combines on-the-ground reporting with an encyclopedic background in the region’s history. It is a combination that is particularly useful for a subject as complex and nuanced as the current war—one that has gradually drawn in Lebanon, Israel, Turkey, Iran, and the monarchies of the Persian Gulf, along with the United States, France, and Britain.

The mainstream media generally considers history an afterthought, which explains why it does such an awful job reporting on the Middle East. Journalists like Erlich, Robert Fisk, and Patrick Cockburn understand that the history of the region and current events are one and the same—a sort of paraphrase of William Faulkner’s observation that history is as much about the present as the past.

Although understanding the historical context of a story is a pretty good rule of thumb for producing competent journalism in general, that is particularly so in the Middle East, precisely because many people think they know about that past. Didn’t they see Lawrence of Arabia? Read Exodus? Or—God help them—read the mainstream press or watch television news?

The book begins with the initial revolt—“The Uprising That Wasn’t Supposed to Be”—and then backs into broader historical context, including a chapter on T.E. Lawrence (if this particular period is of interest to readers, they also might consider picking up Scott Anderson’s excellent book, Lawrence in Arabia). How Syria was created, and the imperial machinations of her architects, Britain and France, is essential to understanding not only the internal dynamics of the country, but its place in the region. The current hostility between Turkey and Syria has roots that reach back almost a century. If you want to understand Lebanon—a key player in the Syrian civil war—knowing how it was created and the strategies of ethnic division that France employed to maintain its colonial grip on this small but strategically placed country is essential.

The book covers Syrian history without bogging the reader down. This is, after all, a report on the ongoing civil war. But Erlich does not glide over the important details, including how the U.S. camel first put its nose under the tent. Two chapters cover the period just after World War I, the impact of World War II, and the appearance of the Assads in 1970.

Erlich maintains that Syrian President Bashar al-Assad’s economic “reforms” helped impel the current uprising. Adopting neoliberal policies, Assad sold off state-owned enterprises—generally to regime allies and insiders—and opened the economy to outside competition. The result—aided by a long-running drought—was growing impoverishment and lots of unemployed youth. Joblessness and economic crisis is a volatile mix and needs only an “incident” to set it off. That happened in March 2011 in the southern city of Daraa, when Syrian security forces brutally attacked peaceful demonstrators.

After laying the historical groundwork for his reporting, Erlich follows with a detailed chapter on the 2011 uprising.

Although Erlich has a clear point of view—he detests dictatorship and neo-colonialism in equal measure—he is a careful and thorough reporter. His discussion of the use of chemical weapons is a case in point. Erlich carefully unpacks the evidence that the Assad regime used Sarin gas and finds that some of it has been exaggerated or even possibly fabricated. Which doesn’t mean the Damascus regime is innocent. His discussion weighs the charges on all sides and concludes that we really don’t know. What we do know is that U.S. intelligence didn’t think the evidence against Assad was a slam-dunk, a fact that the Obama administration deliberately obscured. It is a fascinating treatment of the subject—there were several incidents involving the use of chemical weapons, not just the most horrendous at Al-Ghouta that killed several hundred people—and a good example of Erlich’s diligence as a reporter.

His chapters on “The Uprising Begins,” and “Who Supports Assad” are a must for anyone trying to figure out who is who in this complex tragedy. Erlich details the various factions, how they interlink and how they differ, and why the U.S. policy of arming “moderate forces” is doomed to failure. These chapters are essential for understanding the internal dynamics of the two sides, which are more like a Rubik’s Cube than two opposing poles. The book includes an invaluable appendix on the groups involved, as well as a useful timeline of the current uprising.

Syria is part of a much larger picture, and its strategic placement—bordering Turkey, Iraq, Jordan, Israel, and Lebanon—means that what happens in Damascus doesn’t stay in Damascus. Why is Iran backing Assad? Is this all about religion? (Hint: nope). What will this mean for the 30 million or so Kurds trying to form their own country? Do all the Kurds want to form a country, and, if they do, what will moving that particular piece on the Middle East chessboard do? How might this affect the ongoing fight by the Palestinians to form their own country?

The Syrian civil war has morphed into a proxy battle with Iran and Russia on one side, and the United States, Gulf monarchies, and some NATO members on the other. Although the battle is not over religion per se, religion greases the movement of arms and aid. “To the pious go the guns,” writes Erlich, which means that adherence to the reactionary brand of Islam favored by Saudi Arabia and other Gulf monarchies is a litmus test for whether you get arms and ammunition. It is not an atmosphere in which the Americans’ favored “moderates” can thrive.

Erlich says the White House recognizes that “ultra-right wing Islamic groups” like the Islamic State of Iraq and Syria (ISIS), Al-Nusra, and the Islamic Front are growing at the expense of the less extreme or secular groups. At one point Washington considered simply “re-defining” the extremist Islamic Front as “moderate” so it could send aid to that organization.

Because Erlich is one of those old-fashioned journalists who believes that you need to talk to the principals involved, the readers get an opportunity to listen to what Kurds and Palestinians have to say. This combination of street interviews, suite discussions—he beards the U.S. State Department in Foggy Bottom—and historical background makes for a thoroughly engaging read. Although he generally keeps his distance, Erlich injects himself when needed, or when he wants the reader to know that this is his opinion, not God’s. He also has a sense of humor.

His final chapter, “United States, Russia, and Outside Powers,” discusses the international dimensions of the civil war and what ought, and ought not, be done to solve it.

The Obama administration is slipping into a quagmire that some have even compared to Vietnam. That analogy is probably flawed, but it should still gives us pause—for one, Vietnam demonstrated that air wars don’t work unless you have reliable allies on the ground. Once again, the United States is at war. Once again, the United States is ignoring international law and choosing to use military force over diplomacy. Once again there is a logic at work here that leads to yet another dark tunnel of escalation.