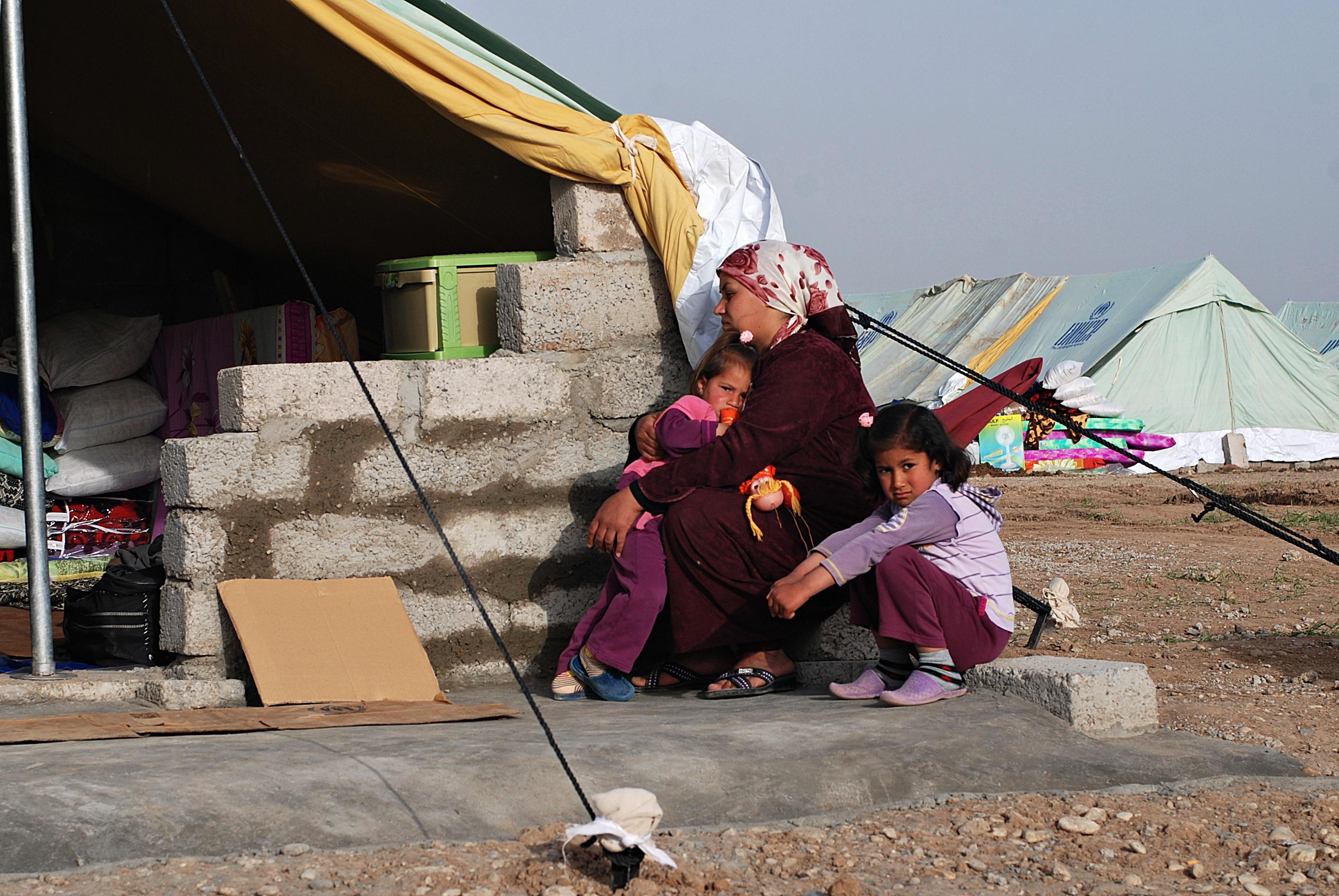 Iraq is better known for exporting refugees than receiving them. But Syrian Kurds are increasingly crossing the border.
By Samer Muscati | May 14, 2012 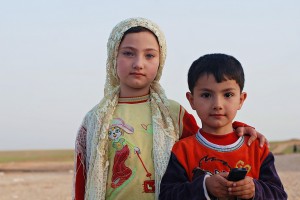 A 7-year-old Kurdish girl and her 3-year-old brother at the Domiz refugee camp. Their family had fled the Syrian conflict a few days earlier. They left everything they owned behind and had to walk for hours to cross the border. The girl was still asking her father when they would go back home. © 2012 Samer Muscati/Human Rights Watch

It was a January evening when his Syrian army unit raided a house near the city of Zabadani, not far from Damascus, the former sergeant recalled. A 70-year-old man wearing a hospital gown was brought to the house, and the soldiers, including a colonel, interrogated him. When he wasn’t able to respond to their satisfaction, one of the guards beat him ferociously in the face with a helmet.

“I heard the old man muttering in a muffled sound as he fell to the ground,” the former sergeant told me. “About 15 minutes after they first brought the man in, I went inside and saw his lifeless body. There was blood coming out of his nose and ears. I’m positive he was dead and they just disposed of his body.”

With violence raging in Syria, thousands of people are fleeing to neighboring countries to escape the bloodshed. Although the flow of refugees to Jordan, Lebanon, and Turkey has been covered extensively, the Syrians who have fled to Iraq, most of them Kurds, have received less attention. As of April 14, when most of these photos were taken, more than 80 Syrian Kurds a day were crossing into Dohuk province, in Kurdish-controlled northern Iraq. Most were coming from Syria’s poorer Kurdish northeastern provinces of Qamishli and Hasakeh. About 1,300 Syrian Kurdish men, women and children were living in tents in Domiz, the main refugee camp for new arrivals, near the city of Dokuk.

After years of discrimination, neglect, and repression, the Syrian government made some concessions to the Kurdish community last year, including granting citizenship to an estimated 200,000 stateless Kurds. It was an effort to keep the Kurds, about 10 per cent of Syria’s population, from joining the anti-Assad protest movement.

Since the start of the uprisings last year, the violence and repression in Kurdish areas have been less bloody than other parts of Syria. But many Syrian Kurds – mainly young men — who fled to Iraq told Human Rights Watch that they felt they were in danger back home. Some feared arrest by security forces because of their political activism or participation in anti-government protests. Others left to avoid being conscripted into the Syrian army, or they deserted, as the sergeant did, after witnessing abuses and the targeting of civilians. Some who left the army joined the rebel Free Syria Army but left soon after because, as Kurds, they said, they were discriminated against or not trusted.

Human Rights Watch researchers who traveled to northern Iraq in April interviewed more than three dozen Syrian Kurdish refugees, who described the dire events they had witnessed at home. 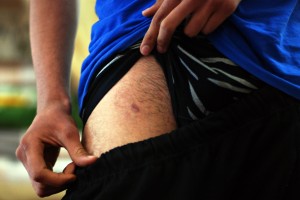 A 17-year-old teenager at the Moqabli camp shows a gunshot wound. He said he was shot by security forces during a peaceful protest in Qamishli on March 12 while helping an injured soldier who had been trying to defect. The teenager was bedridden for three weeks and stayed at a friends house because he was afraid to go to a hospital or to his own house: As soon as I could limp, I made my way to the border. I was so afraid that the army would be looking for me. © 2012 Samer Muscati/Human Rights Watch

A 17-year-old at another refugee camp, Moqabli, showed us his wounds, where security forces shot him during a peaceful protest in Qamishli on March 12 as he was helping an injured soldier who had been trying to defect. “As soon as I could limp, I made my way to the border,” he said. “I was so afraid that the army would be looking for me.”

Another army defector said that in Rastan, in Homs governorate, his battalion arrested 30 men during house raids one night in June in retaliation for the killing of a 19-year-old soldier, Omar Hamza. After the soldier’s death, the defector said, he heard the brigadier general of the 41st regiment say, “We should not let the blood of Omar flow freely. There must be retribution.” The 30 men were interrogated and later that night taken out to a main street, handcuffed and blindfolded. After making the men kneel to the ground, the brigadier general and two other soldiers executed them with machine guns. “I still have flashbacks from that episode,” the defector said. “I know it happened but I still don’t believe what I saw.”

A 23-year-old Kurdish political activist who lived in Damascus said he was arrested last July and severely beaten because he was well-known to the authorities as a regular at protests. He was released only after he signed a guarantee that he would refrain from future protests. “In prison, they kicked me so badly I felt like they were playing soccer with my body,” he said. “They also slapped and beat me, they treated me no better than a dog.”

To escape such horrors, many of the Kurds, the largest ethnic minority in Syria, have told us they paid hundreds of dollars to guides to help them navigate across the border through informal crossing points to Iraq, a country better known for exporting refugees than receiving them. Their hours-long journeys on foot were often perilous. In some cases, the refugees said, Syrian guards shot at them as they approached the border.

One 19-year-old activist said that a Syrian border patrol shot at his group of 37 asylum seekers on April 8 at 2 a.m. when they were about 400 meters from the border. “Shots rang out from the border patrol base toward us,” he said. “I saw two from our group getting shot and dropping to the ground. I don’t know if they survived because after that we all scattered in different directions.”

Domiz was set up in early April. Before that, many new arrivals had been going to Moqabli, a camp already occupied by Kurds who fled Syria in 2004 after a crackdown by security forces. Local authorities started moving the new arrivals to Domiz in early April. 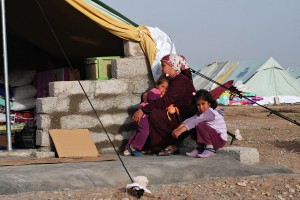 A Kurdish mother with her two daughters at the Domiz refugee camp. Although the immediate family feels safe at the camp, the mother said she is worried about the relatives they left behind in Syria. We sold so many of our things to get here, the mother said. All that we have left is our children. © 2012 Samer Muscati/Human Rights Watch

With about 50 new arrivals daily to Domiz, local authorities and relief agencies, including the United Nations High Commissioner for Refugees and the International Organization for Migration, have been struggling to keep up with the influx. They are concerned about their ability to meet future demand, especially for food supplies.

Although they are now safe in Iraq, the refugees said they worry about loved ones left behind and what the future holds for their country. They said they want to return to Syria once things get better but fear that they and their Kurdish community will continue to face enormous challenges and discrimination in Syria regardless of who leads their country.

Samer MuscatiForeign Policy In Focus contributor Samer Muscati is the emergencies researcher for the Women’s Rights Division of Human Rights Watch. He is a lawyer, documentary photographer, and former journalist who has worked in post-conflict countries such as Iraq, Rwanda and East Timor.