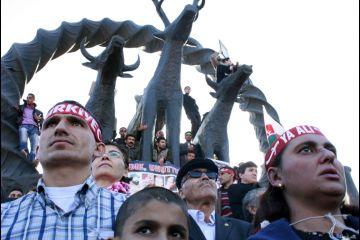 The radicalization and internationalization of Syria's armed opposition have exacerbated the fears of Turkey's minority communities.
By Giorgio Cafiero | August 22, 2012 But despite nearly a decade of economic integration, military cooperation, and diplomatic friendship, Turkey has become one of Bashar Al-Assad’s main enemies since Erdogan turned on his old friend in response to the Syrian regime’s brutal crackdown on the opposition. But the sectarian character of Syria’s civil war has created tensions within Turkey that complicate the triangular relationship among Ankara, Damascus, and the armed Syrian opposition.

In addition to hosting the Syrian National Council, the Free Syrian Army, and the Friends of Syria Group’s second meeting, the Turkish government has cooperated with the United States, Saudi Arabia, and Qatar to finance a “shadowy network of intermediaries including Syria’s Muslim Brotherhood” that provides the armed Syrian opposition with “automatic rifles, rocket-propelled grenades, ammunition and some antitank weapons.” Furthermore, the Turks have dispatched troops and missile batteries along the Syrian border, raising concerns about a potential military confrontation.

Not all Turks support their government’s position on Syria. Many Alawite Turks have expressed solidarity with the Assad regime, as have Turkish Alevis (who belong to another often-persecuted sub-sect of Shiite Islam). These Turks highlight an important lesson about the Middle East. In a region with deep sectarian divisions, national unity sometimes proves weaker than transnational religious, ethnic, and linguistic ties.

Turkish public opinion about Syria’s turmoil is most divided in Hatay province, situated on the Mediterranean coast along the Syrian border. Most of the half-million Arab Alawites living in Turkey reside in Hatay, where Alawites and Sunnis live in equal number alongside a sizeable Christian minority.

Since the violence began in Syria, a number of Alawite-led pro-Assad demonstrations have erupted in Hatay, while Sunni groups elsewhere in the province have aided and abetted the Free Syrian Army. In March 2012, NPR’s Istanbul-based foreign correspondent, Peter Kenyon, reported that “a large demonstration featured the classic pro-Assad chant: ‘Allah, Syria, Bashar, that’s all.’” According to Al Jazeera, many in Turkey’s Alawite community believe “President Bashar al-Assad is trying to hold a tolerant, pluralist Syria together, and many of them are concerned about how minorities are being treated by the Syrian rebels.”

Since Hafez Al-Assad came to power through a bloodless military coup d’état in 1970, the upper echelons of the Syrian government have been filled by members of his Alawite minority community. The regime has effectively played off sectarian divisions, promoting itself as a defender of Syria’s ancient Christian, Alawite, and Druze communities to maintain its legitimacy and consolidate its tight grip over society. Even after 17 months of the government’s deadly crackdown, Syria’s Alawites and Christians (nearly one quarter of the population) have generally remained supportive of the regime due to their fears that the Muslim Brotherhood or Sunni Islamist extremists could acquire power in a post-Assad Syria.

By contrast, religious minorities in Turkey have not received similar protection from their government. During the Turkish Republic’s early years, many Alevis supported Kemal Atatürk because secularism was a key pillar of his ideology. As non-Sunnis, they believed that they could only fare well under a secular political system. However, throughout the last nine decades, Alevi Turks have been persistently marginalized, persecuted, and discriminated against. Right-wing Turkish forces, along with vigilantes and police, committed massacres against Alevi communities in 1978, 1993, and 1995. Moreover, cemevis (Alevi gathering places) are not granted legal status as a place of worship. Even today, numerous NGOs, including the Association for Human Rights and Solidarity for Oppressed Peoples and the Humanitarian Relief Foundation, have documented “mysterious marks drawn by individuals on dozens of homes belonging to members of Turkey’s Alevi minority in … Adiyaman.”

Prime Minister Erdogan’s Justice and Development Party (AKP) is not popular within Alevi circles, and the crisis in Syria has not facilitated an improvement in relations between Turkey’s ruling party and the country’s largest religious minority. Selahattin Ozel, the chairman of the federation of Alevi associations in Turkey, told The Wall Street Journal, “As Turkish Alevis, we do not support an anti-democratic, an anti-humanist regime [in Syria], but we cannot understand why the [Turkish] prime minister so suddenly became an enemy of the Syrian administration.” The Alevis have remained overwhelming supportive of the AKP’s main opposition, the Kemalist-oriented Republican People’s Party (CHP), and many in the community fear that Erdogan is attempting to create a Sunni Islamist state in Turkey.

Within Syria, the Assad regime does have Sunni supporters, primarily from the business class, and some non-Sunni Syrians have joined the opposition, so a portrayal of the Syrian civil war along strictly sectarian lines is an oversimplification. Non-sectarian issues, including democratic reform, economic policies, and the Islamist-secular divide have all been contributing factors to the Syrian civil war. Nonetheless, for many Alawites and Alevis in Hatay, the Assad regime’s Alawite identity and the opposition’s predominantly Sunni identity shape their understanding of the conflict.

As Soner Cagaptay reports, “Should Ankara intervene in Syria against the ‘Alawite’ al-Assad regime and militarily support the ‘Sunni’ uprising, some in the Turkish Alevi community might be inclined to view this as a ‘Sunni attack’ against ‘fellow Alevis.’” Ali Yilmaz Cecim, a Turkish Alevi with a negative view of his government’s relationship with the armed Syrian opposition, echoed this view. “They [the Turkish Sunnis] are taking sides with foreigners against fellow Turkish citizens,” he told the Independent. “We know that many of these Syrians coming in have extremist views, that is why they are fighting their government, despite what they say. The people who want to bring them in are doing so because they will help to push their own extremist religious views here, they want to build up numbers.”

The Future of Turkey’s Religious Minorities

According to the Financial Times, “Reports of the black flag of al-Qaeda flying in parts of Syria, along with the kidnap of two western journalists near the Turkish border by an Islamist gang which seems to have included many foreigners, have led to fears that Syria is becoming a magnet for global jihadis.” Earlier this month, Alex Marquardt of ABC reported on Al Qaeda’s growing influence in Syria and stated that “foreign fighters, mostly religious fundamentalists, [are] streaming in – taking up the fight. They want Assad to go and Syria to become an Islamic state.” Unfortunately, the radicalization and internationalization of Syria’s armed opposition only exacerbate the fears of Turkey’s minority communities that Assad’s ouster could undermine their security.

Some Islamist members of Syria’s armed opposition have brought their anti-Alawite prejudices with them into the refugee camps in southern Turkey, thus exacerbating Turkey’s sectarian tensions. Mehmed Aziz, a 28-year-old Syrian refugee at a camp in Ceylanpinar, Turkey — which receives hundreds of refugees on a daily basis — threatened that any Alawites arriving at the camp will be murdered. On August 4, an Alawite family in Surgu was targeted by a Sunni mob at the beginning of Ramadan, which Alawites do not observe. The mob threw stones at the family’s house and chanted “Death to Alawites. We’re going to burn you all down.” The angry mob only dispersed after police officers announced that the Alawite family was moving, which the targeted family never told the police.

Although Bashar Al-Assad’s regime has carried out grave atrocities against his own people and provided many Syrians with reasons to support the armed opposition, Turkey’s Alawite and Alevi communities across the border have legitimate concerns about the regime’s demise. The possibility of a bloody and vengeance-driven backlash against Syria’s Alawite community is real, especially given the rhetoric and conduct of certain actors within the opposition. Moreover, fears of sectarian violence spilling into Turkey are reasonable given the increasingly deep sectarian divisions that have caused much bloodshed all over the Middle East in recent years. Therefore, the Turkish government’s relationship with the Syrian rebels has been met with disapproval by certain Turks who have an interest in the Assad regime’s survival.