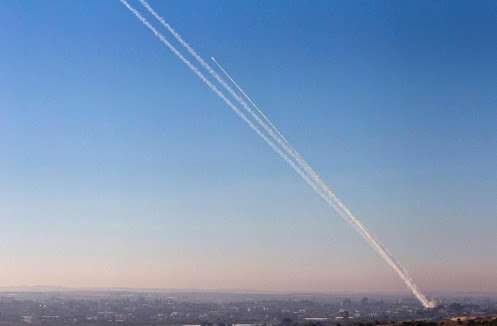 The White House has declared a strike upon Syria imminent without providing a clear rationale for military action, except as an attempt to satisfy an arbitrary “red line.”
By Ben Luongo | September 6, 2013

One year after President Obama declared that Bashar al-Assad’s use of chemical weapons would cross a “red line,” Syria stands accused of carrying out a cruel sarin gas attack against opposition groups and activists, killing hundreds of people in rebel-held East and West Ghouta. According to an assessment published by the U.S. government, the death count exceeds 1,400—constituting not only an escalation of sarin gas use in Syria’s civil war, but possibly one of the deadliest chemical attacks in decades.

The White House’s response to Syria’s chemical weapons use mixed disgust with caution. President Obama expressed “deep concern” but insisted that he has “not made a decision” about how the United States should respond. Even Syria’s alleged use of gas in June prompted only a minor response from the White House to arm opposition forces (reports later revealed that the decision to send weapons was made weeks prior to the attack and the use of sarin gas had no bearing on the decision).

Adding to Obama’s difficulty is the United Kingdom’s decision to abstain from military action. Despite Prime Minister David Cameron calling for a strong response, the UK parliament voted down a proposal for military action. According to Cameron, “I strongly believe in the need for a tough response to the use of chemical weapons, but I also believe in respecting the will of this House of Commons.”

It’s obvious that President Obama is not enthusiastic about the notion of military action in Syria, but the pressure to act has grown from his most stalwart critics. Republican Senator John McCain castigated Obama’s inaction, asserting that, “It is long past time for the United States and our friends and allies to respond to Assad’s continuing mass atrocities in Syria with decisive actions, including limited military strikes to degrade Assad’s air power and ballistic missile capabilities.”

Amid a rising death toll in Syria that now exceeds 100,000, Obama showed no decisive action until late August, when he declared that he is ready to strike Syrian targets. “I have decided that the United States should take military action against Syrian regime targets,” he said. “I’m confident that we can hold the Assad regime accountable for their use of these of chemical weapons, deter this kind of behavior, and degrade their capacity to carry it out.”

The president’s decision to use military force against Syria reflects the White House’s concern that failure to articulate and pursue a clear mission in Syria would discredit Obama’s declaration of a “red line” against chemical weapons as mere bluster. However, relying on military action to prove one’s resoluteness carries the potential of exacerbating the problem. Because the current discourse regarding military action assumes that a strong U.S. response deters the future use of chemical weapons, the prospect of even “surgical” strikes escalating Syria’s violence remains badly neglected.

For instance, the White House has drawn a misguided parallel between Assad and former Serbian president Slobodan Milosevic as a way to justify action in Syria. NATO leaders in 1999 launched a bombing campaign against the Serbian leader to minimize civilian casualties in the war between Serbia and its breakaway province Kosovo. The campaign did eventually end the ethnic cleansing in Kosovo. However, the bombardment lasted for two and a half months, during which Milosevic intensified his brutal cleansing agenda. According to a post-war report published by the Rand Corporation, the NATO bombing campaign was “a major, if not determining, factor” in “the Serb ethnic cleansing push [that] accelerated after Operation Allied Force began.”

Additionally, fears that a failure to punish Assad will inevitably lead to the collapse of international norms against chemical weapons are unwarranted. For instance, Saddam Hussein’s use of mustard and nerve gas in the Iran-Iraq war went unpunished and did not lead to the common and widespread use of chemical weapon by other dictators. The argument that a strong U.S. response is necessary to uphold an international norm overemphasizes America’s power to protect it (although, given Washington’s use of white phosphorus in Fallujah, as well as its complicity in Hussein’s campaign against Iran, it would do well to examine its own record first).

In fact, military action against Syria is likely to yield unintended consequence. Striking Syrian targets, for example, may shift the balance of power in Syria’s civil war, potentially empowering the al-Qaeda affiliates fighting alongside Syria’s rebels.

Even top U.S. military officials are hesitant to endorse an American-led military effort to aid the rebels. Chairman of Joint Chiefs of Staff General Martin E. Dempsey wrote in a letter to Congress that “The use of U.S. military force can change the military balance, but it cannot resolve the underlying and historic ethnic, religious and tribal issues that are fueling this conflict.” He continued to emphasize the factional nature of Syria’s opposition and that not all of the fighters share a democratic vision of the country’s future. “Syria today is not about choosing between two sides but rather about choosing one among many sides,” he concluded. “It is my belief that the side we choose must be ready to promote their interests and ours when the balance shifts in their favor. Today, they are not.”

Lastly, military action does not occur in a vacuum, and striking Syrian targets will most likely have political and diplomatic effect on U.S. relations with other nations. For instance, strikes could compromise the prospective agreement between Iran, Syria’s major ally, and the UN over Iran’s nuclear program. Striking Syria could embolden Iran’s conservative leadership and add to the value it places on possessing a nuclear deterrent. Such a development would undermine the relatively moderate president Hassan Rohani’s new mandate for open dialogue between Iran and the West, making a nuclear deal virtually impossible.

The Obama administration is characteristically deliberative, and the president rarely rushes headlong into action. However, the White House has declared a strike upon Syria imminent despite the fact that President Obama has yet to provide a clear mission for military action, except as an attempt to satisfy an arbitrary “red line.” Hopefully the recent resolution passed by the Senate Foreign Relations Committee authorizing the use of force in Syria doesn’t presage full Congressional support for military action. Rather, the United States should  put off the use of air strikes or cruise missiles in favor of a larger strategy that marries moral responsibility with clear and rational thought.

Ben Luongo is currently a doctoral student and instructor at the University of South Florida’s Department of Government and International Affairs. Previously, he worked as a campaign organizer and directed several campaigns for groups like the Human Rights Watch and Save the Children. In addition to Foreign Policy in Focus, his articles have appeared in International Policy Digest, New Politics, and CL Media.