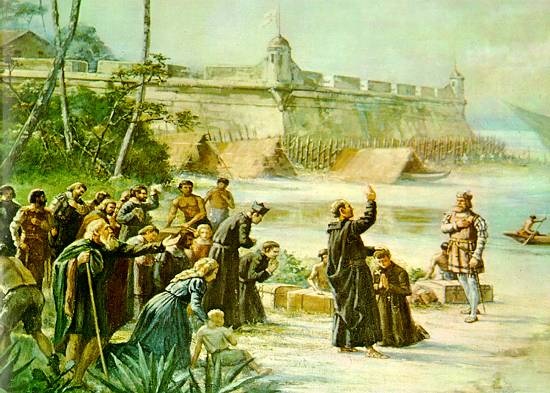 A Tale of Two Jesuits

The election of a Jesuit priest, Jorge Mario Bergoglio, as pope has shined a spotlight on a religious order that has traditionally preferred to work in the background ― or in the shadows, as some would have it. Jesuits were initially known for their missionary work, zeal, and a kind of ruthlessness in the name of their beliefs. Conspiracy theories hold that the order is a secret society bent on world domination.

In fact, due to their predisposition to operate outside the bounds of the church, the Society of Jesus was often looked on unfavorably by the Papacy. Prominent in education (in the United States, think Boston College, Fordham, and Georgetown), they also have reputation for free-thinking. For instance, Daniel Berrigan is a Jesuit.

But, recently, one of three Jesuits who, in 1993, joined Daniel’s brother Philip (a Josephite, not a Jesuit) in hammering a nuclear-capable fighter jet at Seymour Johnson Air Force Base in North Carolina, was exiled from the Jesuits. The Santa Fe New Mexican reports.

John Dear, a peace activist and Jesuit priest who led peaceful protests at Los Alamos commemorating the anniversary of the atomic bombings of Hiroshima and Nagasaki, Japan, for many years and served as pastor at a number of Northern New Mexico parishes in the early 2000s, was dismissed from the religious order last month for being “obstinately disobedient.”

Thus did the Jesuits infantilize him, as if he were a child diagnosed with Oppositional Defiant Disorder.* Bear in mind that Archbishop Desmond Tutu once recommended Dear for the Nobel Peace Prize. You can read about the specific charges in his final column, where Dear wrote that he is leaving “with a heavy heart … because the Society of Jesus in the U.S. has changed so much since I entered in 1982 and because my Jesuit superiors have tried so hard over the decades to stop my work for peace.”

In recalling the 1993 incident, Dear shows how the Jesuits once were.

Then there was my Jesuit provincial. When I asked for “permission” under holy obedience to hammer on a nuclear weapon, he looked at me as if I was crazy and exploded. … Then he proceeded to say something extraordinary.

“I’ve been teaching in university for decades, and at the end of every school year, I gave the same homily: Life is short, and someday you will stand before Jesus in the glory of heaven. When he asks you what you did with the gift of life, what do you want to say to him? I see now that when you stand before Jesus, you want to say, ‘I did what I could for disarmament, justice and peace, for your reign of peace on earth. I tried to follow you by working for nuclear disarmament.’ So you have my blessing, and if they kill you, I will tell everyone what a great Jesuit you were.”

That was then. As for what Dear’s future holds:

I think the nonviolent Jesus wants us — all of us — to work as best we can in these critical times for the abolition of war, poverty, nuclear weapons and catastrophic climate change so God’s reign of peace will spread. So I have joined the staff of Pace e Bene, a small group that works to promote Gospel nonviolence. I’m also helping to organize Campaign Nonviolence, which calls for demonstrations across the country in every congressional district before the elections this fall to protest war, poverty and environmental destruction, beginning with a national gathering Sept. 21 in Washington, D.C.

*Yes, Oppositional Defiant Disorder (ODD) is actually in the DSM. Its anagram is a cruel clinical joke ― imagine an anagram for a developmentally disabled disorder that read RETARD. ODD is described as an “ongoing pattern of anger-guided disobedience, hostility, and defiant behavior toward authority figures that goes beyond the bounds of normal childhood behavior. Children suffering from this disorder may appear very stubborn and often angry.” Obviously, it can be applied to those displaying moral courage, as well.