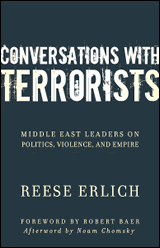 Who is a terrorist and what is terrorism is often in the eye of the beholder.
By Conn Hallinan | November 11, 2010

Who are these “suspected terrorists”?

It depends. For the Republic of Yemen’s government, members of both the Southern Movement and Shiite Houthi in the north are “terrorists.” But in a civil war, can labels by an unpopular and authoritarian regime be accurate and should this be the basis for United States involvement?

“The War on Terrorism” never made any sense,” argues Erlich. “You can wage a war against an enemy country or an insurgency, but you can’t wage war on a tactic.” In short, just because a group uses the weapons of al-Qaeda doesn’t mean they are same.

Erlich redefines the term “terrorism” by placing it in a historical context and lets “terrorists” themselves talk goals and political philosophy. What emerges is far more complex and nuanced account than portrayed in the mass media.

For example, the United States considers Hamas a “terrorist” organization and the chair of its political bureau, Khaled Meshal, a “terrorist.” Erlich points out Hamas is not considered “terrorist” by other countries in the neighborhood, and it will be part of any eventual peace settlement. Thus dismissing Hamas as “terrorist” is not only problematic, it is politically disastrous.

Erlich’s interview with Israeli Geula Cohen, a founder of the 1940s Stern Gang, makes an interesting comparison with Meshal. The Stern Gang bombed civilians, assassinated diplomats, and used murder and violence to drive Palestinians off their lands. While Hamas and Meshal are condemned as terrorists, The Stern Gang and Cohen are Israeli heroes, with streets named after them and museums celebrating their feats.

In short, one man’s terrorist is another man’s freedom fighter.

The author has spent years covering this region, and it shows. The Middle East is a complex place, which the author carefully puts in context. When he challenges the mainstream media for reporting the Taliban are a major recipient of Afghanistan’s drug trade, he can refute the charge by drawing on years of reporting.

Erlich is not afraid of asking hard questions or going into dangerous situations, and is sharply critical of many of the people he interviews. But he also believes the term “terrorist” is a dangerous distortion of reality, which can turn a political conflict into a forever war. “Terrorism” has served as a cover for the American expansion of power into the Middle East and Central Asia, as well as revenue stream for the arms industry.

The book is revealing and well written. Whether one is new to the subject or well versed, the reader will get a lot out of this slim volume of revealing interviews and sharp commentary.

Conn HallinanConn Hallinan is a Foreign Policy In Focus columnist. He also writes the blog, Distpatches from the Edge.