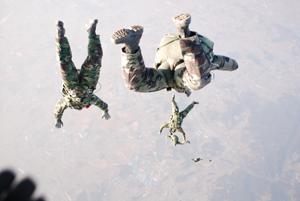 The Army denies a story about the use of Special Forces in North Korea. But a great deal lies behind this slip of the lip.
By Tim Shorrock | May 31, 2012

A classified Pentagon document leaked to me in 1984 may shed some light on a U.S. general’s outlandish claim last week that U.S. Special Forces, along with their South Korean counterparts, have parachuted into North Korea in search of human intelligence on the country’s nuclear weapons programs.

The revelation was made by Brigadier General Neil Tolley, the commander of U.S. Special Forces in Korea, at a “Special Operations Force Industry Conference” in Florida organized by defense contractors. His remarks were relayed by David Axe, a prominent military writer who has reported on Africa and the Middle East but has little experience in Korea.

Writing in The Diplomat, a foreign-affairs magazine published in Tokyo, Axe reported that “a top U.S. commando officer” had revealed that forces under his command had been sent into North Korea to “spy on Pyongyang’s extensive network of underground military facilities.” The “surprising disclosure,” he added, “is a reminder of America’s continuing involvement in the ‘cold war’ on the Korean peninsula.”

Almost immediately, the Pentagon repudiated the story. A spokesman for U.S. Forces in Korea told Voice of America that Axe’s quotes were “made up.” A Pentagon flack later added that the general’s comments “were distorted [and] misreported.” Axe, who wrote a good-humored account of his experience on his blog, War is Boring, stuck to his story and asked the Pentagon for an apology.

Eventually, he got one, and the general’s claims were slightly modified. “I spoke in the present tense,” Tolley told reporters. “To be clear, at no time have we sent special operations forces into North Korea.” An official statement quoted by UPI added that “No U.S. or [South Korean] forces have parachuted into North Korea.”

I wasn’t surprised to see the denials. As a long-time Korea watcher, I was immediately skeptical of General Tolley’s original claims. With tensions on the Korean Peninsula as high as they are, Pyongyang would see any movement by U.S. forces into North Korea as a serious provocation – an act of war.

I wondered how an excellent reporter like Axe could fall for the story and argued on Twitter that the episode “once again shows how gullible and clueless American journalists can be about Korea.” Axe, I said, “should have done his homework.” (Axe later admitted that he might have been taken. “Look people, Korea’s not my usual beat,” he said on his blog. “Far from it. I don’t always know what’s news and what isn’t in Korea.”)

Since then, a lot has been said about Tolley’s comments. Maybe he was speaking hypothetically. Maybe he was trying to send a message to North Korea’s new leader, Kim Jong Eun. Or, as blogger Jeffrey Lewis put it on Arms Control Wonk, maybe Tolley was “speaking in the present tense about a future event — what the United States would do in the event of a war with North Korea.’

That seems the most probable answer. After all, the United States and South Korea have been planning for years for deploy Special Forces into the DPRK in case of war. My documents prove it.

One document, a secret report prepared in 1982 by the Defense Intelligence Agency, describes in considerable detail a redeployment of South Korean Special Forces. Under their “new wartime missions,” DIA said, two Special Forces brigades “will be inserted into the far northern provinces of North Korea near the Manchurian border.”

The document, which has never been made public before, underscores that the insertion of South Korean Special Forces into North Korea has been part of U.S. war planning there for decades. But it also illustrates a knowledge gap. In discussing Korea, most reporters and analysts are oblivious to the deep history of U.S. and South Korean Special Forces – and the terrible reputation earned by the Korean forces as a result of their actions during the country’s dark period of military dictatorship.

During the 1990s, I obtained under the Freedom of Information Act over 4,000 declassified documents focused on the U.S. role in South Korea in 1979 and 1980. That was a tumultuous period marked by the assassination of dictator Park Chung Hee, a bloody military coup led by a Park protégé, Chun Doo Hwan, and a subsequent uprising in the southwestern city of Kwangju that was sparked by the incredible brutality of South Korea’s Special Forces.

I first revealed the existence of my documents in the Journal of Commerce in 1996. They showed that, contrary to official statements that the United States sought to restrain the Korean military in 1980, President Jimmy Carter’s top officials assured the Korean generals that they would not oppose Chun Doo Hwan’s plan to use military troops against pro-democracy demonstrations in the days before his May 17 coup (ironically, last week North Korea’s official news agency reported on those documents for the first time – erroneously).

Moreover, the documents I obtained from the DIA showed that U.S. officials – also contrary to their own statements – were aware long before Kwangju that the Korean military was planning to use Special Forces against unarmed student and worker protests. As I reported in the Korean magazine Sisa Journal:

A DIA cable to the Department of Defense Joints Chiefs of Staff on May 8 (1980) stated that all Korean Special Forces brigades “are on alert” and noted that the 13th SWC brigade had been moved to the Seoul area on May 6 while the 62nd battalion of the 11th SWC brigade had “moved into the Seoul area” on May 7. “Only the 7th brigade remained away from the Seoul area,” the cabled stated. It “was probably targeted against unrest at Chonju and Kwangju universities.”

These SOF brigades acted with great brutality. During a wave of assaults on May 19 and May 20, 1980, they used bayonets, M-16s, and billy clubs to kill and injure dozens of demonstrators. In response, the citizens of Kwangju took up weapons and began shooting back. They held the city for a week, hoping that a peaceful solution might be found to end the rebellion.

But at the height of the uprising, as I’ve documented, Carter and his advisers sided with the military and agreed to release Korean forces stationed on the DMZ to put down the uprising. That allowed Chun to hold on to power for nearly six more years; he was later tried and convicted of murder for ordering the onslaught.

But even though the Korean populace, particularly in the area around Kwangju, hated the Korean Special Forces, U.S. commanders had no problem deploying them again in 1982, according to the secret DIA document I obtained in 1984. The document was titled “South Korean Army Implements Force Realignment.” It reported that the Korean Army was “relocating” two Special Forces brigades deployed near the border with North Korea to “new installations near Kwangju and Chongju,” another city south of Seoul, to fulfill a “perceived need for a trained, riot-control element in the politically volatile Chollo Namdo Province.” It noted correctly that the 11th Brigade “was one of two such units sent to Kwangju to quell the May 1980 riots”; as a result, it is “being moved without the public’s awareness.”

Connection to the North

Here’s the kicker, and the relevance to the Axe story. At the time of their redeployment, the two SOF brigades were also “given new wartime missions along with their new locations. They will be inserted into the far northern provinces of North Korea near the Manchurian border, with the 11th SWC Brigade assigned to the east and the 13th to the west. Planners decided to station them near existing, mission-support-capable airfields because air assets would be required to move these units during hostilities with the North.”

Nearly 10 years after I obtained that document, I asked for it under FOIA. I received a highly redacted document (it’s interesting to compare it with the first to see what they censor and what they don’t) in return. To my amazement, it included a map of North Korea showing exactly where the South Korean Special Forces brigades would be deployed in the DPRK. As you can see on the last page, the 11th and 13th brigades would be in the far north, the 7th on the east coast, the 9th in Pyongyang, and the 1st and 3rd near the DMZ.

A lot has changed since 1982. For one thing, South Korea has become a democracy and put much of its militaristic past behind it. But tensions with North Korea remain high, as they have for years. And, more to the point, U.S.-South Korean military ties are as close as ever, with a U.S. general still in command of the entire force during wartime. The plans for deploying individual Special Forces brigades to the North in the case of open hostilities probably haven’t changed much. Whether U.S. forces will be with them is another question.

Surely General Tolley knew all this when he made his remarks at the SOF Contractor Conference (in a mea culpa to NPR, he admitted that he was “accurately quoted.”). The question remains: why did he say what he did? I would call it a combination of bravado, hubris, and stupidity: just the kind of thing you hear at a contractors’ convention. And I hope it leads reporters to do their research on Korea.

Indeed, it is imperative for anybody writing about U.S. Special Forces or wartime deployments in Korea to look more deeply into the history of U.S.-Korea ties and the role of Special Forces. Axe himself seems to agree: after I made a similar suggestion to him, he tweeted back about Korea: “Complex, yes. Makes me miss Africa.”

Tim ShorrockForeign Policy In Focus contributor Tim Shorrock spent part of his youth in South Korea and has been writing about U.S.-Korean relations since the late 1970s. He is the author of Spies for Hire: The Secret World of Intelligence Outsourcing.