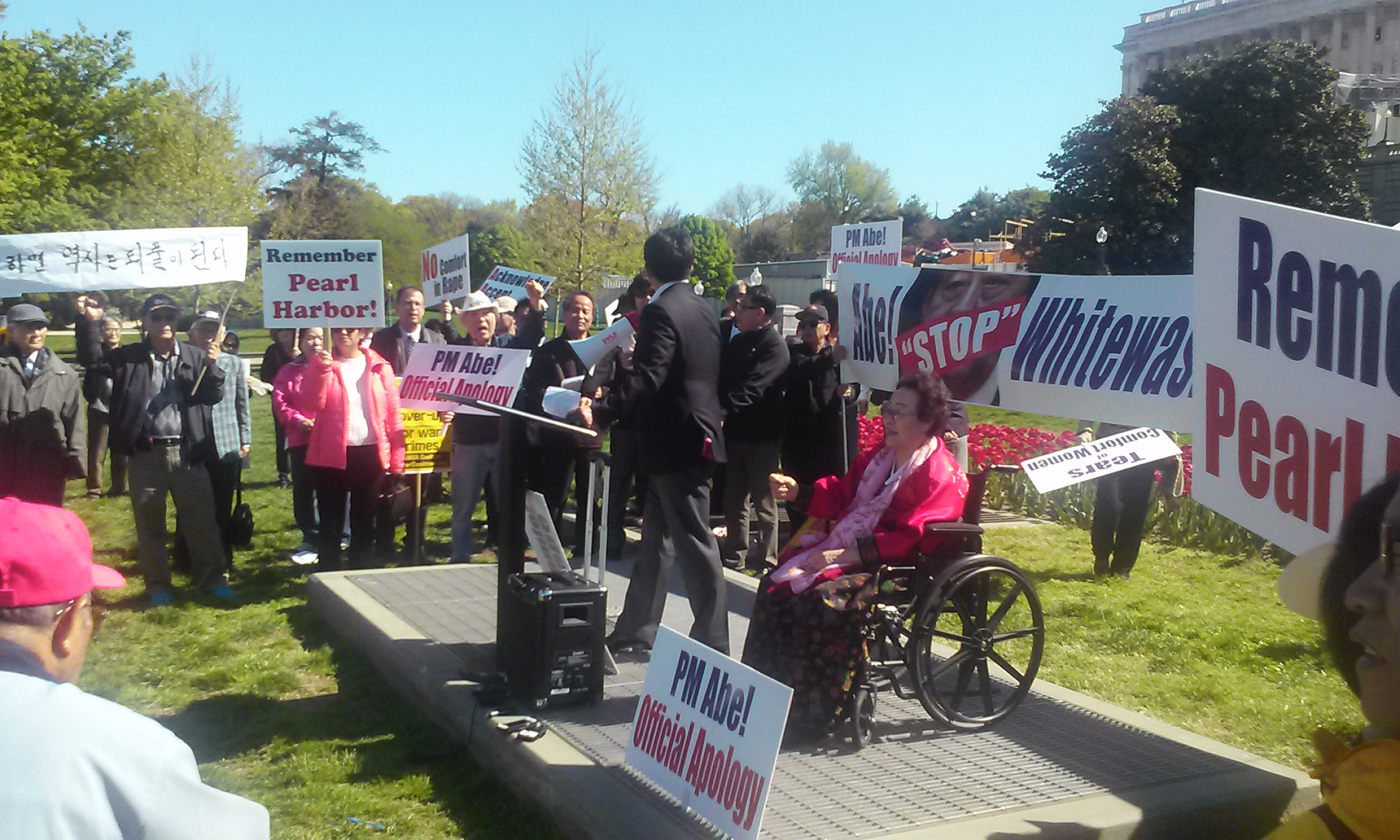 Japan wants a "normal" foreign policy. Its neighbors want apologies for wartime atrocities — and an assurance that Japanese militarism is a thing of the past.
By John Feffer | April 29, 2015

Imagine an international event sometime in the near future known as the Apology Games.

It’s held every four years and features teams of professional diplomats, politicians, and conflict resolution specialists (with a few actors thrown into the mix). There are many rules in this Olympics, but one trumps all the others: contestants can only apologize for the conduct of their own nation.

In the event known as Tearful Remorse, the Olympians see who can use up the most tissues in a five-minute apology (crocodile tears trigger instant disqualification). In contrast to these sprinters, long-distance apologists in the Marathon of Contrition vie over who can address the most historical examples in a 26.2-hour mea culpa. Instead of shot-put, the Don’t Cast the First Stone contest requires contestants, armed with a variety of projectiles, to resist the taunts of the other teams.

There would be individual contests and team events. Gold medals would go to the most cathartic, the most restrained, the most diplomatic.

I doubt I’ll ever see such a sporting event in my lifetime. With a few exceptions, countries generally specialize in apology avoidance. After all, being a nation is never having to say you’re sorry.

Sometimes countries pretend that nothing ever happened (“Genocide? What genocide?”). Sometimes they offer rival versions of history (“That wasn’t a human rights abuse — that was self-defense!”). And sometimes, like petulant children, they practice damage control with half-apologies (“I’m sorry, okay?! Jeez.”)

Such apology avoidance is currently on display here in Washingon, DC with the visit of Prime Minister Shinzo Abe — our man with a plan from Japan, the latest world figure to address both houses of Congress.

Our Man in Japan

Abe is coming to town as the anti-Netanyahu, a foreign statesman popular with both President Obama and Congress who can bring the two federal branches closer together. But in fact, beyond Beltway bipartisanship, Abe and Netanyahu are cut from the same ultra-conservative cloth.

Like Netanyahu, Abe has dragged his country way out past right field — into the bleachers and possibly out of the stadium altogether.

Abe, too, is a staunch militarist and anti-Communist who represents American interests — except when it behooves him not to — in a region full of U.S. adversaries. Abe also has a tempestuous relationship with a near neighbor — in this case South Korea takes the place of Palestine — that holds back true regional cooperation. On the domestic side, both leaders want to eradicate the remnants of a corporatist economy and revive flagging nationalism.

Finally, Abe has also come to Washington to give a pitch for a piece of legislation. Netanyahu wanted to sink negotiations with Iran. Abe, on the other hand, wants to advance negotiations on the omnibus trade deal, the Trans Pacific Partnership.

Of course, Abe comes here with his own “Pacific pivot” in mind. He wants to take advantage of the slipstream of American power to guide his country to regional hegemony. Before he can achieve his goal of a “normal Japan” with an authority and capacity to wage war, however, Abe has to confront Japanese history and address demands for various apologies.

In this 70th anniversary year of the end of World War II, this history may prove to be the biggest hurdle that Abe must clear.

This week, with thousands gathered in front of the Supreme Court on the gay marriage issue, a smaller group of Koreans and Korean-Americans came together on the other side of the the Capitol building to send a message to Shinzo Abe. Some of the signs they carried were provocative, like “Remember Pearl Harbor!” Others were succinct demands, like “Mr. Abe: Official Apology!” And some were more explanatory, such as “Remorse Does Not Equal Apology.”

The apology in question is around Japan’s conduct during World War II, particularly its treatment of women drafted into sexual slavery by the Japanese military. One of the survivors of this system of organized rape, Lee Yong-Soo, was on hand. She told her story a number of times to different audiences on the East Coast, even forcing Abe to use a backdoor to avoid protesters at his speech at Harvard. She is 86 years old.

Once this generation of Korean grandmothers dies, the direct link to the past will be broken. Perhaps Abe is counting on a strategy of outliving Japan’s victims. Indeed, most of the people at the Capitol protest were on the older side.

Japan, as its most vigorous defenders have pointed out, has already apologized for the “comfort women.” In 1993, the government issued the Kono statement, which read in part that the “Government of Japan would like to take this opportunity once again to extend its sincere apologies and remorse to all those, irrespective of place of origin, who suffered immeasurable pain and incurable physical and psychological wounds as comfort women.”

That sounds like a sincere apology. The problem is that the current government has been trying to back away from the Kono statement. Abe’s attack dog, Chief Cabinet Secretary Yoshihide Suga, has testified in front of the Japanese politician that historians need to look into the validity of the 1993 document. There are plenty of Japanese politicians who believe that the “comfort women” story is a myth. They are part of the “Japan Coalition of Legislators Against Fabricated History.” Of course, they are not against the history that they themselves fabricate.

The Abe government also attempted to force a retraction of information contained in a UN report that addressed the issue of women drafted into sexual slavery in World War II. Abe even appointed the son of one of the men who helped set up military brothels — the future Prime Minister Yasuhiro Nakasone — to chair a commission on the comfort women issue. And it has sought to change textbooks not only within Japan that report accurately, and not favorably, on Japan’s wartime conduct — but even textbooks in other countries, including the United States.

So far during his visit in the United States, Abe has gestured in the direction of contrition. “On the issue of comfort women, I am deeply pained to think about the comfort women who experienced immeasurable pain and suffering as a result of victimization due to human trafficking,” he said in response to a question during his press conference with President Obama. “This is a feeling that I share equally with my predecessors. The Abe Cabinet upholds the Kono Statement and has no intention to revise it. Based on this position, Japan has made various efforts to provide realistic relief for the comfort women.”

So, the prime minister is “deeply pained” but not apologetic. He has made a commitment to uphold the Kono Statement. But that’s what he has said about the Japanese constitution, and we all know that he wants to change that too.

In Germany, Holocaust denial is a crime. In Japan, by contrast, denial of World War II-era crimes is not only acceptable, it can be a winning electoral strategy for some politicians.

But history has a way of sticking around, inconveniently for those in power. The atrocities committed against the Armenians by the Ottoman Empire continues to be a thorn in the side of the government of Turkey. The Pope has courageously declared the killings to be a genocide, and Germany, prompted by its legislators, has done the same. The Turkish government has reacted with predictable outrage.

Still, it’s not likely that Shinzo Abe will provide the kind of true contrition for Japan’s wartime conduct that his critics in South Korea, China, the United States, and elsewhere demand.

Unless he feels that he must.

There are two ways of changing Abe’s position on the history issue. The first is to raise the costs so high that he doesn’t have a choice. The second is to make him an offer that he can’t refuse.

So far, the Korean government and Korean Americans have done an admirable job of raising the costs for Abe. They’ve helped to persuade a number of U.S. legislators — including California Democrat Mike Honda, who sponsored a successful bill on the “comfort women,” and New York Democrat Charles Rangel (D-NY), who wrote a recent op-ed — to take a very clear stand. They’ve made sure that this issue does not go away.

It’s possible that Abe will buckle under pressure. But I have my doubts. He’s demonstrated a remarkable contempt for public opinion — in Okinawa around the military base issue, in Japan as a whole over the constitution issue, and with other countries over the history issue.

But there is something that Abe desperately wants: a “normal” foreign policy. He wants to break free of the restraints of Japan’s pacifist constitution. To do so, he needs American support. But he also needs to reassure countries in the region that he doesn’t intend to recreate a militarist Japan. He has to prove that the Japan of the 1930s and 1940s is dead and gone. He has to solve the history once and for all.

So, here’s the deal Washington might dangle in front of him: If the Japanese government buries the ghosts of the past, it can have its normal military.

Since I’m a strong advocate of Article 9 — which prohibits Japan from waging war — this is not a deal that I personally would support. But I suspect that it might be the only way to force Abe and his influential cadre to pull a Germany and take an unflinching look at what the country did during World War II.

My preferred solution would be a regional Apology Olympics in which every country with a major stake in East Asia comes to terms with its own sorry history. Russia would finally deal with Stalinism, China with Maoism, Japan with its World War II conduct, the United States with the bombing of Hiroshima and Nagasaki (and perhaps the fire-bombings of Tokyo as well), South Korea with its conduct in the Vietnam War, and North Korea with its various aggressions against the South. And that would only be the first round of the six-party qualifiers.

But this isn’t going to happen. In fact, I’m sorry I ever brought it up. Okay?! Jeez….