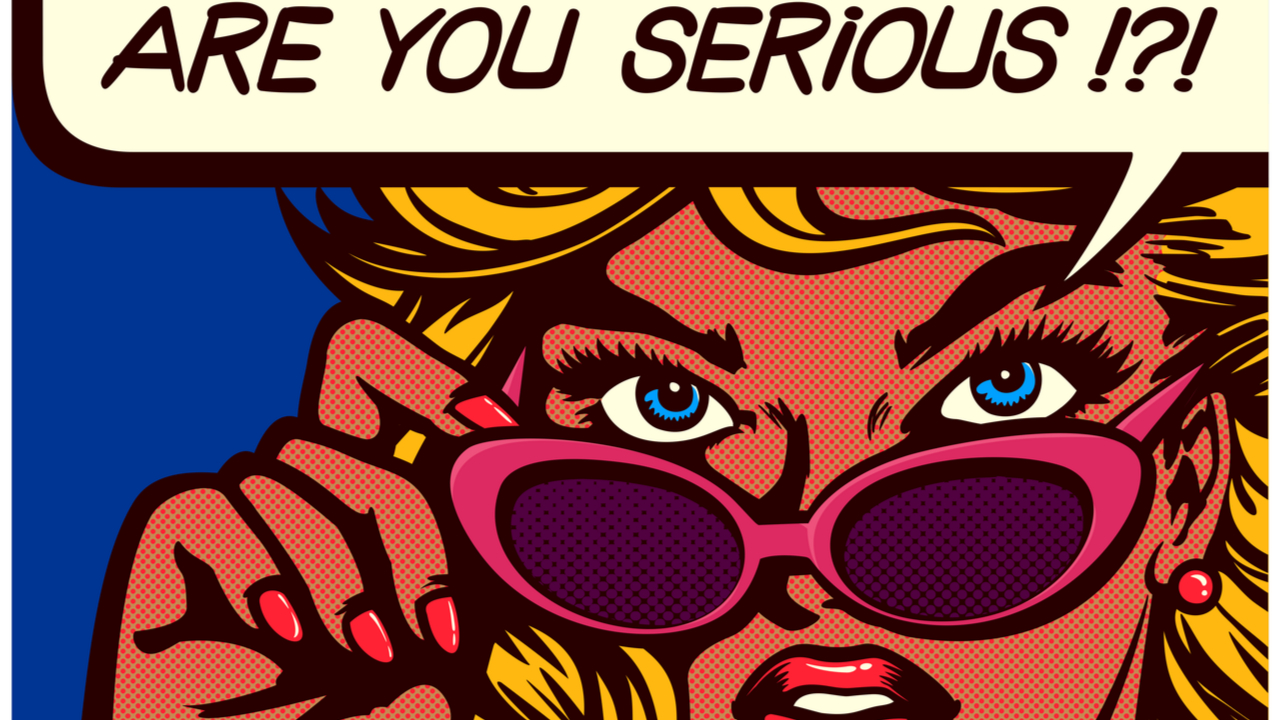 A Pentagon plan for "semiautonomous" nuclear devices in Iraq, U.S. state media calling George Soros a "nonbelieving Jew," and other headlines you may have missed last year.
By Conn Hallinan | January 21, 2020

Each year Foreign Policy In Focus columnist Conn Hallinan gives awards to individuals, companies, and governments that make reading the news a daily adventure. Here are the awards for 2019

The Life Imitates Art Award goes to the U.S. Border Control and the Trump administration, which are currently holding between 11,000 and 14,000 immigrant children under the age of 18 in internment camps.

According to the London Review of Books, a Border Patrol agent gave a three-year old the choice of being with her mother or her father. When the father was being taken away the child began to cry, only to be scolded by the agent: “You said with Mom.” The child’s name: Sofi.

The Dr. Strangelove Award goes to the U.S. Defense Department for its unique solution to the problem of supplying troops in war zones. Between 2001 and 2010, U.S. soldiers escorting fuel convoys in Afghanistan and Iraq accounted for more than half the casualties suffered by American forces.

The solution? Portable nuclear power plants that would generate between 1 and 10 megawatts and service up to 1,000 troops. The “micro-nukes” would be “semiautonomous” — that is, they wouldn’t need on-site operators.

Even small reactors contain significant amounts of highly radioactive and long-lived isotopes, like cesium-137. I mean, what could go wrong?

The Fake News Award goes to the U.S. government’s Radio Marti. The station, run by the Agency for Global Media that also includes Voice of America, got caught faking a mortar attack during a broadcast from Managua, Nicaragua.

One of the journalists involved in the deception, Tomas Regalado Jr., is the son of Tomas Regalado Sr., who oversees Radio and TV Marti.  Radio Marti broadcast several shows last year that described philanthropist and Democratic Party donor George Soros as “a nonbelieving Jew of flexible morals.”

The Golden Jackal Award goes to the U.S. arms company Raytheon, with a tip of the hat to Lockheed Martin and Boeing, for landing more than $1 billion in intermediate missile contracts.

The contracts were awarded shortly after the Trump administration withdrew from the Intermediate Nuclear Force Agreement (INF) in 2018. Intermediate missiles are considered especially destabilizing because their short flight time means all sides must keep their missiles on a hair trigger.

“The withdrawal from the INF Treaty has fired the starting pistol on a new Cold War,” says Beatrice Fihn of the International Campaign to Abolish Nuclear Weapons.

Runner up is ArmorMe, a company that produces children’s backpacks. Field-tested by the Israeli military, the backpack includes a sheet of bullet resistant Kevlar. According to the company, the backpack “looks and feels like a regular eco-friendly canvas backpack — so your child will fit in with his or her friends.”

But if a shooter shows up, it provides “protection for your child, peace-of-mind for yourself.”

Catherine de’ Medici Award — named for Catherine de’ Medici (1519-1589), who was known as the “great poisoner ”— goes to the Pentagon for contaminating drinking water at military bases with polyfluoroalkyl, or PFAS, a major ingredient of fire fighting foam. The chemical causes cancer, kidney failure, immune system suppression, and other health problems.

The military has known about the contamination for decades but failed to tell anyone about it until recently. Scientists have dubbed PFAS the “forever chemical,” because it if virtually indestructible.

According to the Pentagon, the military is now moving on the problem. “I’m proud of what the Department of Defense has done in the last two-plus years,” says the military’s deputy assistant for the environment, Maureen Sullivan.

But asked how many people could be affected, she replied that she “couldn’t hazard a guess — we’re tracking water sources — not people.”

The Golden Grinch Award goes to the Trump administration for cutting food stamps for up to 750,000 people and limiting benefits for an estimated 3.7 million people, while spending $649 billion on this year’s military budget.

While the government was handing out $28 billion to farmers hurt by the White House’s trade war with China (the vast majority of which, according to the Environmental Working Group, went to large, corporate farms), it was altering the poverty index to make it more difficult for the poor to receive nutritional assistance.

In the meantime, Huntington Ingalls Industries was awarded $15.2 billion to build two aircraft carriers to add to the U.S.’s 10-carrier fleet. The Russians have one (and it is small, old and recently damaged in a fire) and China has two (with plans for one more).

The Great Moments in Science Award has two winners:

The Henry VIII Award goes to Saudi Crown Prince Mohammed bin Salman, who doubled the number of beheadings in 2018 and is on track to break that record in 2019.

Before Salman came to power in 2017, the Saudis had beheaded 67 people in the preceding eight months. He increased the pace to 133 in 2018, and is on pace to behead over 170 people in 2019. While many are South Asians coerced into smuggling drugs, others are oppressed Shiites from Saudi Arabia’s oil-rich eastern provinces. Of the 37 beheaded on a single day in April, 33 were Shiites.

Victims are not allowed lawyers and torture is an accepted way of carrying out investigations. Three were minors, a violation of international law. No American administration has protested the execution of the minors or the use of torture to extract confessions.

The Terminator Award goes to the U.S., United Kingdom, South Korea, Russia, Israel, and Australia for trying to torpedo a United Nations treaty banning  “lethal autonomous weapons systems.” The Campaign to Stop Killer Robots is trying to require “meaningful human control over the use of force” in such devices lest “lives be taken based on algorithms.” Some 28 governments back a ban on such weapons.

The Marie Antoinette Award goes to Francios de Rugy, president of the French Assembly and a close ally of President Emmanuel Macron. The Macron administration is trying to increase the age of retirement and cut pension plans. Macron also sliced unemployment benefits and public services, while cutting taxes for the wealthy.

In the meantime, Mr. de Rugy has been hosting lavish dinners for friends and family at his official residence, the Hotel de Lassay, featuring lobster tails and bottles of 2004 Mouton-Rothschild at $560 a pop.

Runner up in this category is the British Foreign Office, which spent $15.8 million to purchase a full-floor apartment in New York City to house the British Consul General. In the meantime, the Conservative government refuses to pay for re-housing the survivors of the terrible 2017 Grenfell fire that incinerated more than 70 people.

And when British Foreign Office rescues women who are forced into marriages in places like Pakistan and Somalia, the victims are billed for services. Four women, whom the Foreign Office saved from a religious institution in Somalia, where they were chained and whipped to force them into marriage, billed them $900 apiece for their rescue. The women’s passports were confiscated until they paid up.

The Golden Lemon Award goes — once again — to Lockheed Martin for its F-35 Lightning stealth fighter, at $1.5 trillion, the most expensive weapon system in U.S. history.

According to Defense News, pilots have to carefully watch their speed lest they damage the airframe and stealth coating. Apparently cockpit pressure spikes cause “excruciating” air and sinus pain. The pilot’s $400,000 helmets don’t work very well, and each helmet is designed to fit only one pilot. It takes several days to get a replacement helmet if one breaks.

The June readiness rate for the F-35 — that is the percentage of planes that can make it into the air — was 8.7 percent, not quite up to the 80 percent readiness standard for all other aircraft. But things are looking up: In May only 4.7 percent of the planes were ready to fly.

Over 300 F-35s have been sold to allies, with Japan a prime customer. One of those F-35s crashed in April, killing its pilot and grounding the fleet. According to the Japanese, the plane had been forced to make seven emergency landings prior to the crash. The Americans and the Japanese are desperately trying to find the wreckage, because “the F-35A is an airplane that contains significant amounts of secrets that need to be protected” from opponents, said Japanese Defense Minister Takeshi Iwaya.

A modest proposal: give our F-35s to all potential enemies and let them have a really expensive plane that doesn’t work.

The Golden Oops Award goes to U.S. Strategic Air Command that tweeted that it was prepared to drop something “much bigger” than the New Year’s Eve crystal ball in Times Square.  The tweet was followed by a video of a B-2 bomber dropping bombs. The blowback on social media was so fierce that the military quickly pulled the video and apologized that it “was in poor taste and does not reflect our values.”

The Ethnic Sensitivity Award goes to the U.S. State Department’s director of policy planning, Kiron Skinner, who, at a public talk last April, said that the competition between the U.S. and China was bitter, because “it’s the first time that we will have a great-power competitor that is not Caucasian.”

This would come as a surprise to Pearl Harbor veterans. So exactly who does Skinner think we fought at Midway, Guadalcanal, and Saipan?

On the plus side, the Kudo Award, finally, goes to: