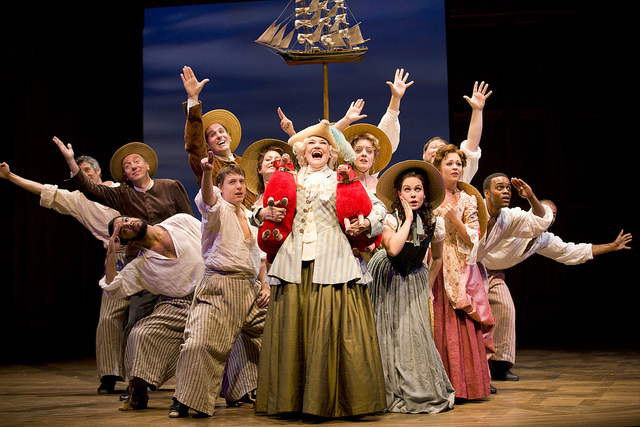 The Huntington's 2012 production of Candide (T. Charles Erickson via Flickr)

The Best of All Possible Worlds?

The powerlessness of positive thinking in the age of Trump.
By John Feffer | August 15, 2018

Candide is the first and most amusing example of the powerlessness of positive thinking.

In this 18th century novel by Voltaire, the naïf Candide suffers one misfortunate after another – kidnapping, torture, earthquake. Still he adheres to the philosophy of his mentor, Dr. Pangloss, who insists that all is for the best in this best of all possible worlds. Never has there been such a mismatch between philosophy and facts on the ground. Only at the end does the chastened Candide reject the Panglossian worldview, adopt some measure of realism, and narrow his focus to cultivating his own garden.

Donald Trump is the anti-Pangloss. Even as he personally enjoys all the perks of being a billionaire and a president, he constantly reminds Americans that they face the worst of all possible worlds. As Trump pointed out in his inaugural address, America is a land of “carnage,” thanks to the policies of his predecessors. The world beyond America’s borders is scarier still and requires walls, travel bans, and even a new branch of the military to patrol space. Trump promises to make America great again, but the “deep state,” the fake media, liberal Hollywood, and Lebron James are preventing him from doing so.

About one-third of America believes in Trump’s dystopian vision of the world. Everybody else believes that Trump himself is dystopia incarnate.

Even if you take Trump out of the picture (please!), it still seems as though the world is lurching from one tragedy to another: financial crisis, rising temperatures, super storms, horrific wars, peak refugees, another Ebola outbreak, failed states, rampant corruption, political and economic polarization.

Who on earth could possibly think that this is the best of all possible worlds?

Well, Steven Pinker, for one.

Six years ago, cognitive psychologist Steven Pinker argued that, contrary to conventional wisdom, violence is on the decline: fewer people dying in war, in dictatorships, in criminal acts, even in disputes at home. He made a powerful case, though he slighted the violence committed by democratic states and by business. As I wrote in my review of his book, The Better Angels of Our Nature:

Pinker is back and this time with a full-throated defense of the Enlightenment and its version of civilization. He is expanding his argument about violence to argue that everything is getting better. In Enlightenment Now, he laments that our noses are too close to life’s grindstone to see this bigger picture.

Pinker marshals a good deal of evidence to back up his claim. Life expectancy has gone up. Extreme poverty has gone down. Scientific advances have made life easier. Liberal values of tolerance have become more widespread. The air, water, and soil have gotten cleaner (at least since the Industrial Revolution). Oh, and yes, violence has decreased.

Everything else is a blip, according to Pinker. The current threats to Enlightenment values – Trump, Putin, climate denial, the narcissistic super-rich, al-Qaeda and the Islamic State – all these will pass. Pinker is not that much different from an early twentieth-century Marxist who believed that history would necessarily produce a radiant future. It just needs a little push in the right direction.

I imagine that there was a Steven Pinker in every past society on the verge of extinction. The Mayan Steven Pinker told his compatriots that there was nothing to worry about. Sure, there’d been a little less rain over the years, but the Mayan Empire was nearly 700 years old and life had been getting better and better. Surely, the rains would come and things would pick up…

The Angkor Wat Steven Pinker would have been enthusiastic about the heavy monsoon rain that fell over the Khmer empire, particularly since he and his kin had just suffered through their own devastating drought. Sure, it looked as though these heavy rains were destroying the very infrastructure of empire, but they’d rebuild again, wouldn’t they, just as they always had?

The Roman Steven Pinker would have praised the great accomplishments of the empire and its spread of characteristically Roman values all over the world. Sure, there were some restive tribes that occasionally swept down from the north to sack a city or two. But it was impossible to imagine that the edifice of civilization would crumble at the hands of disgruntled barbarians…

Likewise, today’s Steven Pinker scants all the signs and portents of environmental unsustainability. He downplays resource depletion, species extinction, and most importantly, carbon emissions. He does so not only because they complicate his relentlessly cheerful vision of the future but also because these environmental problems are the byproduct of his treasured Enlightenment notions of progress.

The environmental crisis, in other words, forces a reevaluation of all the sacred cows of modernity. These problems can’t be Panglossed over. As Joshua Rothman puts it in The New Yorker: “Pinker could be right in the short term but wrong in the long term. Maybe the world is getting better, but not better enough, or in the right ways.”

When I travelled throughout Eastern Europe in 2012-3 to understand why Enlightenment values were on the decline in that region, I was always asking people whether they thought, nearly 25 years after the fall of the Berlin Wall, the glass was half-full or half-empty. The statistics suggested that they were better off: more prosperous, more democratic, healthier, more connected to the world at large.

And yet, many people in the region didn’t see it that way. Nearly half of Romanians, for instance, believed that life under Nicolae Ceausescu was better than at the time of their polling in 2014. Ceausescu! They somehow believed that life under one of the Communist bloc’s most repressive dictators was better than life within the European Union. Were they misremembering? Were they just thinking that life had been better when they were younger?

In some respects, of course, life had gotten worse in Romania. The media was full of news of corrupt politicians, widespread crime, poverty – which only reinforced what Pinker refers to as “negativity bias.” Moreover, many people in Romania were demonstrably well off, which created a great deal of resentment among those whose standard of living hadn’t budged much at all. And the spread of Enlightenment values of tolerance was generating a backlash among more conservative elements in society who were not thrilled about an annual Gay Pride parade.

Pinker would treat these perceptions as a mere speed bump. But perceptions, right or wrong, determine the outcome of elections, among other things. Illiberal leaders from Trump to Putin, in responding to (and reinforcing) such perceptions, offer a narrative for understanding why things fall apart. These storytellers can’t be wished away. They can’t be blithely disregarded simply because they’re not part of history’s progressive trajectory.

In a perceptive review in The Nation, David Bell puts his finger on another problem with Pinker’s worldview: his misreading of how social change happens.

Pinker seems to believe that progress has occurred almost by itself, as a result of whole populations spontaneously turning more enlightened and tolerant. “There really is a mysterious arc bending toward justice,” he writes. Almost entirely absent from the 576 pages of Enlightenment Now are the social movements that for centuries fought for equal rights, an end to slavery, improved working conditions, a minimum wage, the right to organize, basic social protections, a cleaner environment, and a host of other progressive causes. The arc bending toward justice is no mystery: It bends because people force it to bend.

Ultimately it doesn’t matter whether you think the glass is half-full or half-empty. The focus should be on filling the glass – on struggling to make life better for those who are not well off, harnessing technology to improve conditions for everyone, and saving the planet from climate catastrophe. Some of the Enlightenment tradition will be essential in this struggle. But an eighteenth-century philosophy, unmodified, cannot solve twenty-first century problems.

Pinker’s Panglossian narrative will not vanquish the forces of illiberalism. Saying that this is the best of all possible worlds does not make it so. Even a leading Enlightenment thinker like Voltaire would have been the first to tell the good professor that.