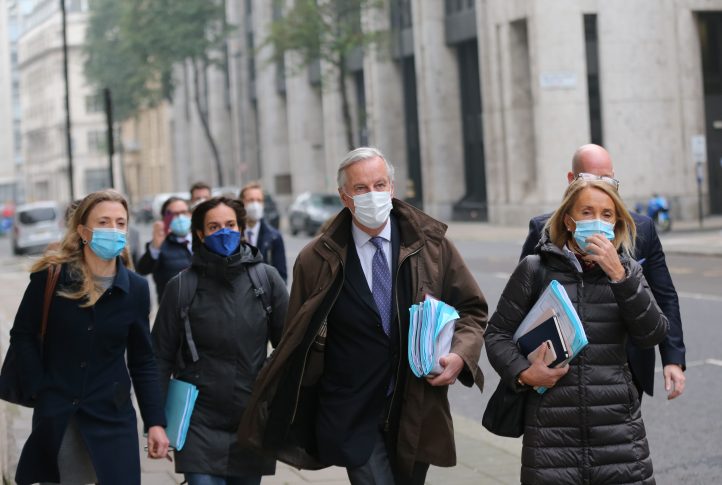 EU’s Chief Brexit Negotiator Michel Barnier walks from his hotel to the the 1 Victoria Street to attend the new round of trade talks in London. (Shutterstock)

The United Kingdom has failed to sign a beneficial new trade agreement with the European Union. The future trade and political relations between the two sides will not serve any of the goals of the UK that are either rational or that fulfill the populist policies that exiting the EU was supposed to achieve.

The leading negotiator on the European side was Michel Barnier, a seasoned treaty negotiator who understands well the intricacies of the functioning of the European market. The UK’s position was dictated by the populist prime minister Boris Johnson, a relentless critic of the European Court of Justice, which according to him, created massive red tape. The British team hadn’t negotiated a trade agreement since joining the EU back in the 1970s. As a result, their chief negotiator David Frost was quite inexperienced.

The outcome of the treaty negotiations was predictable, given the inequality of bargaining power between the biggest free market zone in the world and a nation of only 66 million people.

To protect its economic interests, the UK government should have had two objectives: guarantee the real ability of British goods to enter the European market and make sure that the city of London remains the biggest service provider in the vicinity of the European continent. In reality, the British team had the goal of protecting an imaginary UK sovereignty, to “take back control,” their version of the slogan “to make Britain great again.”

The EU’s prime objective was to protect the EU internal market. The loss of Britain as a large contributing partner had been already happened four years ago with the Brexit vote. The second objective then was damage control—to minimize the impact of Brexit on the economies of the EU member states.

To achieve their first economic objective, the UK negotiators should have understood the priority of the EU internal market: he removal of trade barriers.  Tariffs and quotas are but a small part of this goal. The core of the EU market is the removal of what are known as MEQRs, measures equivalent to quantitative restrictions, which have the same impact as tariffs and quotas. MEQRs are not enacted by the “bureaucratic EU” but by other member states of the EU. These national rules, directly or indirectly, hinder internal trade.

National governments can enact such trade-restricting rules for a variety of reasons. For instance, a national government might want to protect consumers from imports with low health and safety standards. Or, it might want to support local companies against competition from similar imports. Politicians often have incentives to enact such measures in order to get re-elected. Or, given corporate contributions to election campaigns, there might be some level of corruption involved.

The Court of Justice of the European Union (CJEU) puts a stop to these restrictions. Two foundational cases play a role in these judgments: Dassonville and Cassis de Dijon. In Dassonville, the Belgian government made it hard to sell scotch whiskey on its territory by asking for a certificate of origin. The European court removed that restriction. As a result, scotch whiskey flowed seamlessly into EU markets.

Because of Brexit and the recent deal, the CJEU cannot reduce trade barriers and thus red tape for UK products as it did in Dassonville. An entire section of the new treaty deals with rules of origin, which means that it does not eliminate non-tariff barriers as Dassonville did. Rather, a provision of the treaty provides for only a limited prohibition of some MEQRs. Indeed, EU countries can impose a number of fees at the border on UK goods. Such fees can be: expert reports on goods, information gathering about the goods, the examination or sampling of goods for verification purpose of the goods, and exceptional control measures of goods with potential risks.

The British wanted to reduce red tape. Instead, they will get even more of it.

The other case, Cassis de Dijon, created the principle of mutual recognition. That means that every member state of the EU can certify its products according to its own wishes and rules. The British government cannot do that anymore. It has to follow the rules of each EU country to which it wants to export. If the German government decides that scotch whiskey can enter the German market only in triangular boxes, the British producers have to change their packaging. The new treaty forbids “charge of any kind,” but that might not be enough to avoid these additional costs to British exporters.

Since mutual recognition and rules of origin are not part of the deal, many non-tariff barriers remain, which translates into higher costs and greater bureaucratic hassles for the British.

Meanwhile, on the issue of services, which constitute 80 percent of the British economy, the EU has not interest in granting the UK free access to the internal market. Most of the new treaty provisions on services start with promises of future commitment. The EU is essentially kicking the can down the road, which is not good news for the British. As Boris Johnson himself admitted, the deal “perhaps does not go as far as we would like“ on financial services. With London now a competitor in banking and finance, billions of euros will be traded from new European hubs starting in January.

Barnier achieved everything the EU wanted. He secured a free trade agreement to avoid a shock to the economy that could have come from a strong reaction of the stock markets. British exports will now be allowed into Europe only when they are beneficial to the continental economy. If UK car manufacturers use parts made in Europe, the final product will satisfy the rule of origin. If the parts come from elsewhere, however, the cars will be too expensive to sell in Europe. Meanwhile, if the British violate any of the EU rules, the level playing field rules allow Brussels to retaliate. Finally, the French won on the contested issue of fishing rights.

On the larger question of achieving British sovereignty, the Johnson government clearly failed.

Sovereignty depends on power. Powerful countries like the United States can protect their sovereignty because they have that power. The UK is a small island that no longer possesses that kind of power. Their sovereignty depends on what others will allow them. That will become even more evident in the future trade negotiations between the UK and other countries. President-Elect Joe Biden has said that he is Irish and will protect the Irish peace and the Good Friday Agreement. Irish interests are not British interests. China and Russia will also flex their muscles. Thus, political sovereignty and taking back control are a populist illusion.

According to game theory, the weaker of two negotiating parties is satisfied with substantially less than half of the bargain. The UK wanted to forestall the economic shock that the markets could have delivered had the negotiations failed. Such a shock would have been too much to handle considering COVID-19’s ongoing devastation of the British economy. The stronger side in these negotiations, the EU, had little to lose had there been no deal because it had already suffered losses as a result of the Brexit referendum. Also, the EU’s trade with the UK is small as compared to the other way around. Moreover, Barnier’s skillful team of negotiators managed to further tilt the bargaining in the EU’s favor.

The result for the UK is devastating. British negotiators were after the chimera of sovereignty and not real economic interests, which made for a very one-sided deal. Still, in true Trumpian fashion, the UK prime minister declared victory. Once again, the populists’ short-term interests do not align with society’s long-term goals.