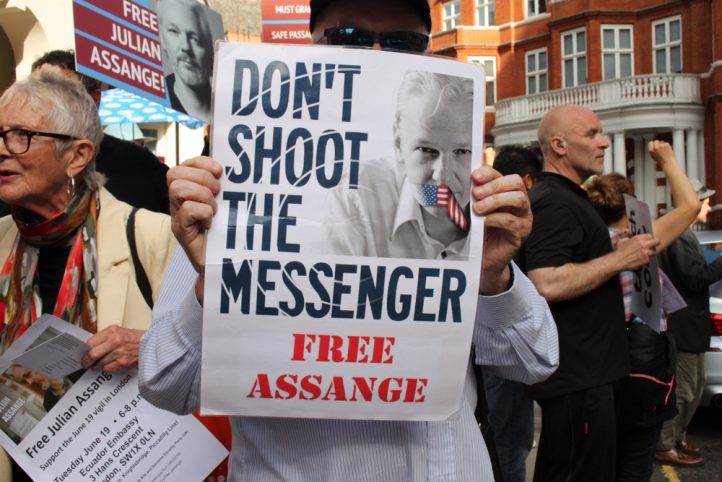 The Justice Department has prepared criminal charges against WikiLeaks founder Julian Assange and is working behind the scenes to have him extradited to the United States. Press freedom and the right to dissent may hang in the balance.

The criminal charges were accidentally revealed last week when Assange’s name was found on the court filing of an unrelated case, suggesting that prosecutors had copied a boilerplate text and forgotten to change the defendant’s name.

Barry Pollack, a U.S. lawyer on Assange’s team, told the New York Times: “The news that criminal charges have apparently been filed against Mr. Assange is even more troubling than the haphazard manner in which that information has been revealed.” Pollack continued, “The government bringing criminal charges against someone for publishing truthful information is a dangerous path for a democracy to take.”

Assange has been holed up in the Ecuadorian embassy in London since 2012, after seeking protection against sexual assault allegations in Sweden. While the initial arrest warrant has since been revoked, if Assange leaves the embassy he runs the risk of being apprehended by UK authorities and extradited to the United States, a process greatly facilitated by the recent criminal charges.

“Using free speech against us”

The U.S. government has targeted WikiLeaks and Assange for years. A confidential U.S. Army document from 2008 recommends “legal actions” and attacks on the livelihood and reputation of “current or former insiders, leakers, or whistleblowers” connected to WikiLeaks in order to “damage or destroy” its “trust as a center of gravity.”

WikiLeaks enjoyed a brief heyday among Republicans when it released hacked Democratic National Committee (DNC) emails during the 2016 presidential election. Then-candidate Donald Trump mentioned WikiLeaks over 160 times during the final month of the campaign, calling it “amazing” and saying “We love Wikileaks. Wikileaks. They have revealed a lot.”

During the campaign, Trump adviser Roger Stone often boasted about being connected to WikiLeaks, even claiming to have had dinner with Assange. Days before the dump of hacked Clinton campaign emails, Stone tweeted, “I have total confidence that @wikileaks and my hero Julian Assange will educate the American people soon #LockHerUp.”

Donald Trump Jr. was in repeated contact with WikiLeaks during the 2016 presidential election, and then-Congress member Mike Pompeo openly encouraged his social media followers to visit the WikiLeaks site for “proof” of various claims against Democratic candidate Hillary Clinton.

But it’s one thing to reveal information about the DNC and another thing entirely to expose a CIA hacking program with domestic spying implications — which is exactly what WikiLeaks did in March 2017 with its Vault 7 release. Just a month later, reports surfaced that U.S. authorities were preparing charges against Assange, with Attorney General Jeff Sessions calling his arrest a “priority.”

After being tapped to head the CIA in early 2017, Mike Pompeo actively began targeting Assange. In his first public speech as CIA director, Pompeo slammed WikiLeaks as a “non-state hostile intelligence service,” adding that “we can no longer allow Assange and his colleagues the latitude to use free speech values against us.”

“Use free speech values against us”? So much for the First Amendment.

Assange was granted Ecuadorian citizenship in late 2017, possibly part of a covert plan to relocate him to Russia in 2018. The British Foreign Office blocked that plan, however, so Assange remains in London.

The situation is untenable. Ecuador’s President Lenín Moreno sees Assange as an “inherited problem” impacting the country’s relations with the United States. Hanging in the balance for Ecuador could be a military base and an International Monetary Fund loan.

Assange’s recent legal case protesting new asylum conditions was rejected by a court in Ecuador. Meanwhile, his health deteriorates in what amounts to solitary confinement without access to sunlight or fresh air. His contact with the outside world remains severely curtailed.

While the exact criminal charges recently levied against Assange remain secret, the primary issue is whether WikiLeaks is portrayed as a news organization deserving of First Amendment protections or rather as a foreign government agent.

If the Justice Department takes the latter approach, then a World War One-era red-baiting law will probably be used against Assange. Originally intended for spies, the Espionage Act enjoyed a renaissance under President Obama, who used it more than all previous administrations combined — usually to pursue government officials who’d spoken to journalists.

The ACLU calls the Espionage Act “a fundamentally unfair and unconstitutional” liability law that treats whistleblowers exposing civil rights violations the same as spies selling damaging documents to foreign dictators. The Act enables leaked material to be retroactively categorized as classified, and with little justification.

It also makes the legal defense of whistleblowers almost impossible. As Jesselyn Radack, Director of the Whistleblower and Source Protection Program at ExposeFacts, wrote in a 2014 op-ed entitled “Why Edward Snowden Wouldn’t Get a Fair Trial“: “First Amendment arguments have failed, largely because they would criminalize the journalism made possible by the ‘leaks.’ The motive and intent of the whistleblower are irrelevant. And there is no whistleblower defense, meaning the public value of the material disclosed does not matter at all.”

The stakes of extradition

If extradited to the United States, whether prosecuted under the Espionage Act or not, Assange could become a dead man walking.

Former House Speaker Newt Gingrich has said Assange should be treated like an enemy combatant, while Hillary Clinton has wondered if he could be killed by a drone.

Fox host Rush Limbaugh suggested that Assange “would die of lead poisoning from a bullet in the brain and no one would know who put it there!” Fox commentator Bob Beckel offered: “Dead men can’t leak stuff… there’s only one way to do it: illegally shoot the son of a bitch.”

Assange’s mother “shudders to think” what CIA Director “Bloody Gina” Haspel might do to her son. In a recent interview, Christine Assange said, “Once in the U.S., the National Defense Authorization Act allows for indefinite detention without trial. Julian could very well be held in Guantanamo Bay and tortured, sentenced to 45 years in a maximum-security prison, or face the death penalty.”

In February 2018, weeks before his internet access was cut, Assange participated in the Austrian Elevate festival. Via videostream he referred to the “Pompeo Doctrine” of criminalizing transparency seekers as a “serious threat to the press.”

Assange said authorities were using his situation as a “general deterrent,” and added “the more developed the society and economy, the more skill in installing that fear without resorting to assassinations.” He concluded by observing that those who have the luxury of living in peace must see through “the illusions of fear in order to ensure that those people in other countries don’t face the reality of war.”

Heather Wokusch is an author and educator based in Europe. She can be reached via www.heatherwokusch.com.