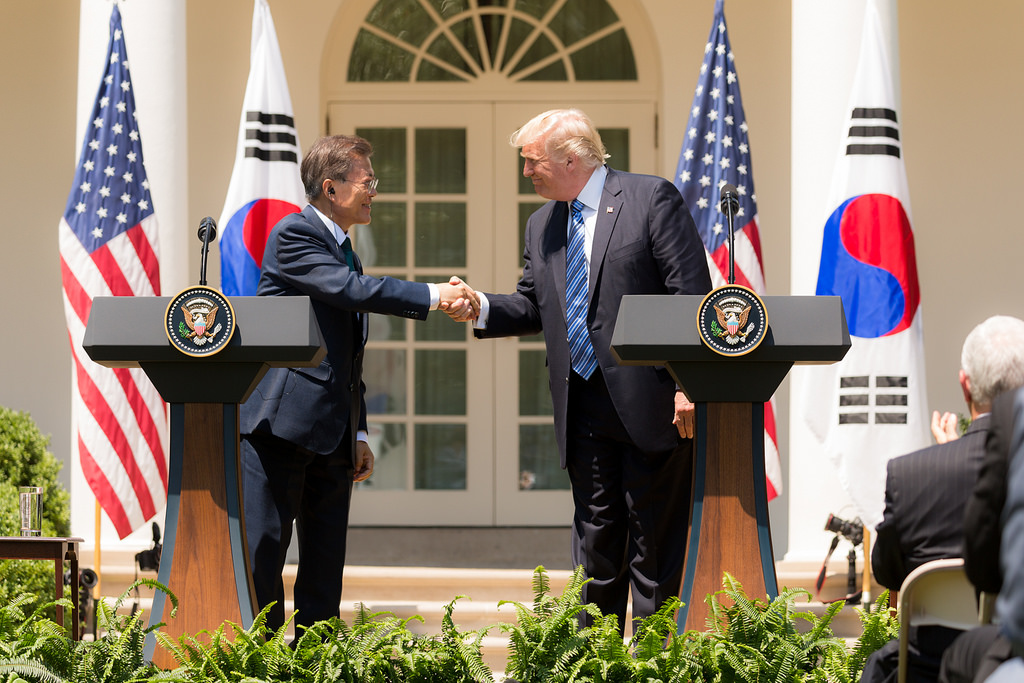 The Case for ‘America First’ on the Korean Peninsula

"America First" used to mean keeping the military out of countries that don't threaten us. Trump's upended that, but now's the time to bring it back.
By Geoffrey Fattig | April 11, 2018

Of all the political maxims that Donald Trump has upended since he launched his presidential campaign with a ride down a gilded escalator, perhaps none is more symbolic than the slogan that has come to define his presidency: America First.

For Trump, these words are nothing so much as an expression of aggressive machismo, providing the ideological underpinning to a range of retrograde policy approaches from trade to immigration.

With the recent appointment of the uber-hawkish John Bolton as National Security Advisor, this list has seemingly expanded to include foreign policy as well. Bolton’s career has been a steady stream of incendiary rhetoric and calls for American military intervention around the globe, most notably as a leading proponent for the disastrous invasion of Iraq in 2003.

Ironically, this view is completely at odds with what America First has traditionally implied. Until Trump hijacked the slogan, it had long been associated with an isolationist foreign policy stance. It was first popularized by President Woodrow Wilson during his 1916 re-election campaign, whose slogan boasted of Wilson that “he kept us out of war.”

More famously, the America First Committee was founded in 1940 with the sole purpose of keeping the United States out of the next major war in Europe. The Committee quickly grew into an organization of 800,000 members which represented a wide swath of American society, and whose position influenced official policy until the Japanese attack on Pearl Harbor in December 1941. Indeed, President Franklin Roosevelt himself pledged to keep the U.S. out of the conflict during his campaign for a third term in 1940.

It was into this vein of isolationism that Trump tapped with his own initial use of the “America First” slogan. During the presidential campaign, Trump questioned why the U.S. military was still stationed in countries like South Korea and Japan, and demonstrated skepticism over the utility of NATO.

According to Michael Wolff’s book Fire and Fury, Trump also seemed reluctant to take action against the Syrian government following a chemical attack that occurred early in his presidency, initially siding with since-departed chief strategist Steve Bannon’s view to “keep the United States out of intractable problems.” (Bannon, it should be noted, also dismissed the possibility of military action against North Korea, and even appeared open to withdrawing the U.S. military from Korea as part of a comprehensive peace agreement.)

Bolton’s appointment threatens to take the notion of America First in an entirely different direction at a critical time, particularly on the Korean Peninsula.

After months of strain, inter-Korean relations have been improving at a rapid pace since Kim Jong-un offered an olive branch to South Korea during his New Year’s address. South Korean President Moon Jae-in wasted no time seizing the opportunity for dialogue, and the two sides were able to come together in a spirit of rapprochement during the Pyeongchang Winter Olympics, fielding a joint women’s hockey team, coordinating a series of musical performances by a North Korean orchestra, and marching together into the opening ceremony under a flag of unification.

This spirit of goodwill has continued after the conclusion of the Olympics, and the leaders of the two Koreas are set to hold a summit at the Joint Security Area in Panmunjeom — the very symbol of Korean division — later this month. At the top of the agenda will be the North Korean nuclear program, with Moon likely to press the issue in an effort to bolster the possibility of a potential Kim-Trump summit coming to pass in May.

Moon is no doubt aware that progress on the nuclear issue is imperative for avoiding a repeat of the perilous situation last fall, when rising tensions brought the Peninsula closer to conflict than at any time since the Korean War ended in 1953.

Yet something deeper is at play as well. As someone whose parents were born in North Korea, Moon has made inter-Korean reconciliation a central theme of his administration. During his two campaigns for president, he supported a confederation with North Korea as the first step toward eventual reunification of the Peninsula. For his chief of staff, he controversially chose Im Jong-seok, a man who served jail time for leading a pro-North student group in his youth and who was eventually given power of attorney by Kim Jong-il in 2005 to enforce North Korean copyright claims in South Korea.

In statements that echo those of the leaders in Pyongyang, Moon has also called for eventual unification “by our nation itself,” without outside interference. (Trump himself inadvertently brought this latent unification drive to light in a meeting with Moon last November by asking whether reunification was really necessary.)

This vision will undoubtedly be a tough sell to the South Korean public. While the concept of reunification still enjoys majority support, this has been dropping steadily in recent years, particularly among younger voters who make up a core component of Moon’s political base. It will require delicate negotiations to overcome decades of mutual hostility and distrust, and with the troublesome issue of the North Korean nuclear program lingering in the background, threatening to sabotage the current climate of reconciliation.

With these concerns in mind, the Moon administration has come under criticism recently for attempting to suppress academic and media voices that run counter to its North Korea policy.

In this fraught environment, a U.S. administration committed to the true principles of America First could play an extremely beneficial role.

North Korea has expressed its willingness to “denuclearize the Peninsula,” which in practice means that it’s willing to give up nuclear weapons if the American military threat facing the country is removed. Indeed, North Korean leaders have longed viewed the presence of U.S. troops as the primary obstacle to their long-standing goal of reunification. Anything short of a viable path for achieving this is unlikely to convince Kim Jong-un to disband his nuclear program, regardless of whatever contrary declarations he’s made during his recent blitz of international diplomacy.

This in turn raises the likelihood of Bolton convincing Trump to undertake unilateral military action against the North, which would lead to catastrophic consequences. Rather than using a summit with Kim solely to deliver an ultimatum, as Bolton has advocated, President Trump should instead consider what America First originally stood for: the absence of military involvement in countries which pose no threat to the United States.

If he were to take Moon up on the idea of a trilateral summit and use the occasion to declare his support for the unification drive that is simmering below the surface of inter-Korean politics, Trump would not only be engendering a great deal of goodwill on both sides of the Peninsula. He would also be fulfilling the original vision of America First, and signaling that the United States is ready to play a proactive role in creating the conditions for long term peace in Northeast Asia.

Geoffrey Fattig
Geoffrey Fattig is an independent research analyst based in Seoul. He has a master’s degree in International Affairs from UC San Diego and previously worked as a speechwriter for the U.S. Department of State.