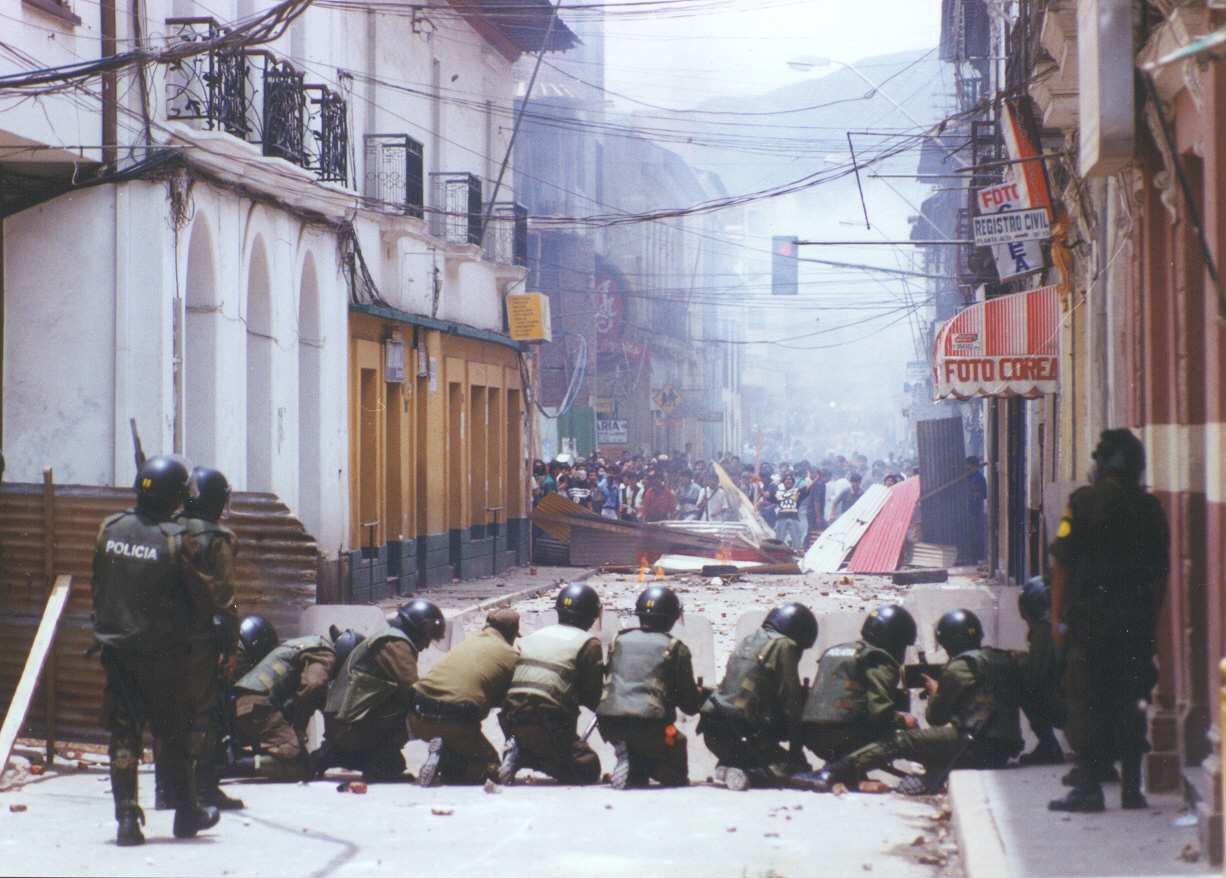 How Bolivian protesters and global activists exposed the dark side of global trade pacts and paved the way for the battles to come.
By Jim Shultz | April 24, 2015

There’s an international awakening afoot about a radical expansion of corporate power — one that sits at the center of two historic global trade deals nearing completion.

One focuses the United States toward Europe — that’s the Transatlantic Trade and Investment Partnership (TTIP) — and the other toward Asia, in the Trans-Pacific Partnership (TPP). Both would establish broad new rights for foreign corporations to sue governments for vast sums whenever nations change their public policies in ways that could potentially impact corporate profits.

These cases would not be handled by domestic courts, with their relative transparency, but in special, secretive international tribunals.

It’s a stupendously powerful tool and a double win for the corporations: It’s a money machine that loots public treasuries and a potent tool to stifle unwelcome regulations, all wrapped in one. As Senator Elizabeth Warren recently wrote in the Washington Post, “Giving foreign corporations special rights to challenge our laws outside of our legal system would be a bad deal.” But it’s a deal U.S. lawmakers are rapidly preparing to make as they debate extending “fast-track” trade promotion authority to President Barack Obama.

The system of closed-door trade tribunals has been around for decades now, nestled like a ticking time bomb into hundreds of smaller bilateral trade agreements between nations. But not so long ago, the trade tribunal system wasn’t the stuff of high-profile op-eds by U.S. senators. It was virtually unknown except among a small cadre of international lawyers and trade specialists.

The case that brought the system into broad public view was born 15 years ago this month on the streets of a city high in the Andes. How that case was won holds powerful lessons today for the battles over the TTIP, the TPP, and the effort to hand global corporations enormous new legal powers.

It started here in Cochabamba, Bolivia, in April 2000, when citizens rebelled against the takeover of their public water system by a foreign corporation.

In what became known as the Cochabamba Water Revolt, thousands of Bolivians faced down bullets and batons to take back their water from Bechtel, the California engineering giant. Within weeks of taking over the local public water system, Bechtel’s Bolivian company had hit water users with price increases averaging more than 50 percent, and often far higher. Families faced stark choices between keeping water running from the tap or food on the table.

Protesters shut down this city of half-a-million people three times with blockades and general strikes. The right-wing government sent in soldiers and police to defend Bechtel’s contract, killing a teenage boy and leaving hundreds of others wounded. But the protests only increased, and finally Bechtel was forced to flee Bolivia, returning the water to public hands.

A year later, however, Bechtel struck back — this time in a World Bank trade court. The company demanded not only the $1 million it had invested in the country, but a full $50 million — the rest being the future “profits” the company claimed it had forgone by leaving.

Bechtel’s case against Bolivia sparked a second rebellion. This one was global and just as powerful, a citizen action campaign that stretched worldwide. In the end, Bechtel would walk away not with the $50 million that it demanded from Bolivians, but just 30 cents and a badly damaged public image. The case also ripped the mask off a system of secret trade courts that today sits at the heart of the trade debate.

A System Designed for Corporate Advantage

Here in Bolivia, a soccer team from anywhere else would be foolish to play a match against a Bolivian team in La Paz, the nation’s capital. At nearly 13,000 feet above the sea, most foreigners find it a serious challenge just to climb a staircase, much less chase a ball for 90 minutes.

The legal venue chosen by Bechtel — the World Bank’s International Center for the Settlement of Investment Disputes (ICSID) — has a similar quality. It’s a playing field tilted deeply to corporate advantage.

It’s no small irony that Bechtel went to the World Bank, since it was the World Bank that set the Cochabamba Water Revolt in motion to begin with.

In 1997, World Bank officials made the privatization of Cochabamba’s public water system a condition of loans the bank was issuing to expand water service in the country. So Bolivia’s government was compelled to offer a 40-year lease to Bechtel, complete with a guaranteed annual profit of 16 percent — a gouging deal backed by the willingness of the government to shoot its own people if required.

The World Bank’s ICSID and other international tribunal systems are a corporate dream. The tribunals that decide these cases are made up of lawyers who move from being highly paid corporate defenders in one case to supposedly impartial judges in the next, a blatant conflict of interest. It’s a system where testimony is commonly sealed and where cases are heard thousands of miles away from the communities involved.

Unsurprisingly, corporations win either a full or partial victory more than half the time.

The Court of Public Opinion

The citizen campaign that took on Bechtel refused to wage its fight in the confines of Bechtel’s carefully chosen judicial comfort zone.

The organization I run, the Democracy Center, and our Bolivian and global allies took aim at Bechtel instead on the battlefield where citizen movements do best: the court of public opinion. That campaign became a powerful early prototype for how to organize in the age of the Internet, driven not so much by an orchestrated grand plan as by sheer, viral inspiration.

Through our own articles and our work with journalists from the New Yorker, PBS, and elsewhere, the Democracy Center kept telling, over and over again, the powerful narrative of a David and Goliath victory on the streets of Cochabamba. Water Revolt leaders from Bolivia also traveled across the world to share their story directly.

We hung that story not just around Bechtel’s corporate neck, but the neck of its CEO and namesake, Riley Bechtel. We even released his personal email address to thousands of people. As people reached out to us to get involved, we armed them with the hard evidence and some advice on strategy, encouraging them to take whatever action they were moved to take that could build pressure on the corporation.

The result was a beautiful, global spectacle of citizen power.

In San Francisco, activists shut down Bechtel’s headquarters by chaining themselves together in the lobby. A local coalition also got the San Francisco Board of Supervisors to pass a city resolution calling on Bechtel to drop its Bolivia case — just as the company was negotiating a major city contract.

In Amsterdam, people mounted a ladder outside Bechtel’s local office and renamed the street for the teenager killed by soldiers during the Cochabamba Revolt. In Washington, protesters picketed the house of the president of Bechtel’s Bolivian water subsidiary. At the South Africa Earth Summit, Bolivian activist Marcela Olivera recruited organizations to join a “Citizens Petition to the World Bank” calling on Bechtel to drop the case. EarthJustice filed a legal petition demanding public participation, and the Institute for Policy Studies mobilized Washington NGOs.

From one corner of the world to another, Bechtel was seized upon by angry Lilliputians tying a mighty corporate Gulliver to the ground.

The Power of Storytelling

In January 2006, besieged Bechtel officials flew to Bolivia and signed a deal with the Bolivian government under which it dropped its World Bank case for two shiny 1 boliviano coins — the cost of a local bus fare. No other major corporation, before or since, has ever been forced to drop such a major trade case by a campaign of citizen pressure waged against it.

In the end, Bechtel was defeated by something very simple: a story. It was a narrative about people fighting for their water, and of a corporation content to see them killed in order to squeeze the poor for profits it never earned. The mighty corporation could never escape the moral power of that story. We hit Bechtel with it using not just one tactic, but every tactic we could think of — from legal briefs to direct action. We didn’t waste time debating which approach was more worthy.

The trade battles before us today, including the TPP and TTIP, must also be fought with stories that lift the issue above technical jargon and into popular understanding.

And there’s no shortage of stories to tell. The tobacco giant Phillip Morris demands $2 billion from Uruguay for the sin of strengthening health warnings on cigarette packages. The people of El Salvador face a $300-million case from a Canadian-Australian mining company because El Salvadorans were able to block toxic mining operations. Germany faces a demand of €700 million from a nuclear energy company because, in the aftermath of the Fukushima disaster, popular movements won a moratorium on new nuclear power plants in the country.

Telling the stories of cases like these is essential to building a broader public understanding of what’s at issue in these arcane negotiations: a corporate power play against basic democracy.

“It is impossible to overstate the impact of the people’s victory in Cochabamba against Bechtel,” Noami Klein observed recently. “At a time when winning real victories seemed like a distant dream, we suddenly saw that it was still possible to win, even against a giant U.S. multinational.” In the battle of the Bolivian people against Bechtel, David beat Goliath not only once, but twice. In the midst of the current battles on trade, the spirit of both those victories and their concrete lessons well deserve our remembrance.

Jim Shultz is executive director of the Democracy Center and lives in Cochabamba, Bolivia. He tweets at @jimshultz.