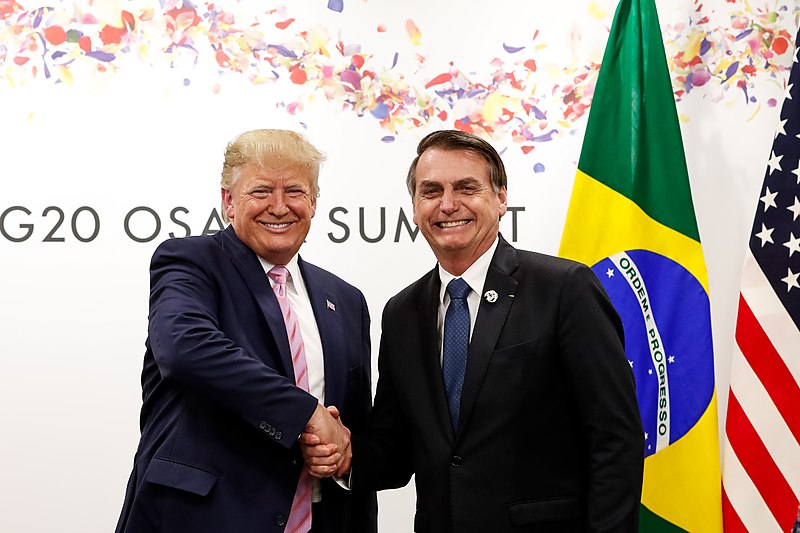 The Class Politics of Coronavirus Responses in the Americas

Beyond their bastions of vociferous and implacable supporters, the Western Hemisphere’s self-styled “populist” right-wing governments in the United States and Brazil have been widely lambasted for their disastrous responses to the COVID-19 pandemic.

For this and other reasons, Brazilian President Jair Bolsonaro is rapidly losing public support, including among the country’s deeply conservative political and economic elites.

Yet the same can’t be said about Donald Trump, who remains entirely capable of triumphing in November despite his relative unpopularity. Indeed, without a fundamental change in the posture of the Democratic Party’s leadership, the political effect of the pandemic may be to further entrench, rather than undermine, the Trumpist right.

To prevent this, what is needed is a platform that addresses the material concerns of working people by combining public-health measures with economic ones, thus ensuring that those who need to “stay at home” have the means to do so.

COVID-19 and the Hemispheric Right

Although the Trump administration’s pandemic-related antics and machinations are well known, the crisis of leadership is at least equally as stark in Brazil.

For his part, Bolsonaro has dismissed the novel coronavirus as a “little flu.” While taking a break from a jet-ski excursion to join a barbecue that was being held on a boat, he declared that “there’s nothing to be done” since most people are going to catch it anyway (as he has also commented, in a similarly nihilistic fashion, “We’re all going to die one day”). He also made a mask-less appearance at an “anti-democratic” protest where he lashed out against social-distancing measures and extolled the virtues of the same armed forces who led the country’s brutal authoritarian regime (1964-1985).

Tellingly, and despite an extremely low testing rate, Brazil now has the world’s second-largest number of documented infections and the highest daily death toll. The hospital system in the megalopolis São Paulo is reportedly on the verge of “collapse,” while the pandemic is starting to batter densely populated favelas in Rio de Janeiro and elsewhere. As one local doctor put it, “Brazil is probably the next epicenter of the pandemic in the world.”

Crises are particularly inauspicious moments for the always-delicate art of prediction-making. Nevertheless, Bolsonaro’s political future has clearly been imperiled, not least because many of his previous right-wing allies—including the governors of the states of São Paulo and Rio de Janeiro, both of whom likely harbor presidential ambitions, and the latter of whom tested positive for COVID-19—have pushed back against his fierce criticism of their stay-at-home orders. Also contributing to Bolsonaro’s declining elite support has been his failure to push through many of the promised, neoliberal economic reforms, particularly mass privatizations.

This is not merely because of the relative strength of the U.S. right or the fact that few of the country’s conservative elites, unlike their equally reactionary Brazilian counterparts, have begun to coalesce into an opposing faction.

Rather, economic policy differences appear to play a major role.

To be sure, the Brazilian government’s stimulus measures are far from satisfactory. Further, they are insufficient to compensate for Bolsonaro’s catastrophic undermining of public-health measures or the myriad other scandals that engulf his administration. Also worth noting is that future rounds of punishing austerity are presumably on the horizon in Brazil. Yet even Bolsonaro’s far-right administration has found itself deviating from neoliberal orthodoxy in certain respects, particularly by issuing monthly (if relatively small) payments to workers in the informal sector and announcing state infrastructure spending.

In contrast, the best the United States has been able to muster through bipartisan deal-making are one-time stimulus checks, some of which have yet to even be distributed.

The lethargic and miserly U.S. approach will mean missed rent payments, empty pantries, and further indebtedness, but it can also bring political consequences. Ironically, these may include buttressing the electoral fortunes of the very forces who bear primary responsibility for the calamitous U.S. response to the pandemic.

That the Democratic Party establishment is significantly beholden to the “professional-managerial class” is fully evident in its pandemic talking points, according to which masks are to be worn, health care and “essential” workers are to be applauded (without, it seems, being offered accompanying raises), and everyone else is to stay at home.

Yet, in the absence of economic policies that allow people to feed their families while still following long-term “shelter-in-place” orders, the Democratic Party’s response amounts to little more than empty virtue-signaling. Indeed, white-collar office workers may justly recoil at the prospect of months of endless Zoom meetings. Further, many women, in particular, find themselves confronted with the impossible task of trying to balance the at-home workday with childcare and domestic labor. However, those who occupy lower and more precarious positions on the social hierarchy simply cannot stay at home without the enactment of economic policies that enable them to do so.

Various options exist for the Democratic Party, each with its own merits. These include direct, regular, and substantial payments to all workers (for example, the Monthly Economic Crisis Support Act, as recently introduced by Senators Bernie Sanders (I-VT), Ed Markey (D-MA), and Kamala Harris (D-CA)), the implementation of a German-style program (known as Kurzarbeit) in which the state reimburses employers for a large portion of the wages of furloughed staff, and rent/mortgage relief, as proposed by Representative Ilhan Omar (D-MN).

Yet whatever the route taken, the point is that without a massive, government-led effort to keep the general population solvent, self-quarantining will be economically viable only for those of sufficient means. The current strategy of asking working people to stay at home in the absence of sufficient economic relief is not only unrealistic. It also evokes a classist, patronizing, and moralistic form of politics all too common among the liberal intelligentsia.

Politically, proceeding in this fashion risks driving the dispossessed into the waiting arms of a right-wing movement that is only too willing to capitalize on people’s economic pain by promising to “open up America again,” no matter the public-health consequences.

Indeed, while Bolsonaro’s future electoral prospects currently appear dim, the fact that Trump remains a viable contender this November is in no small part due to the failure of the Democratic Party’s leadership to advance an economic agenda—whether in the context of the pandemic or otherwise—that will actually entice working people to vote.

Kevin Funk, Ph.D., is a Washington, DC-based political scientist who teaches and writes about globalization and Latin American politics. He can be reached at kevin.funk@gmail.com and followed at @KevinBFunk.