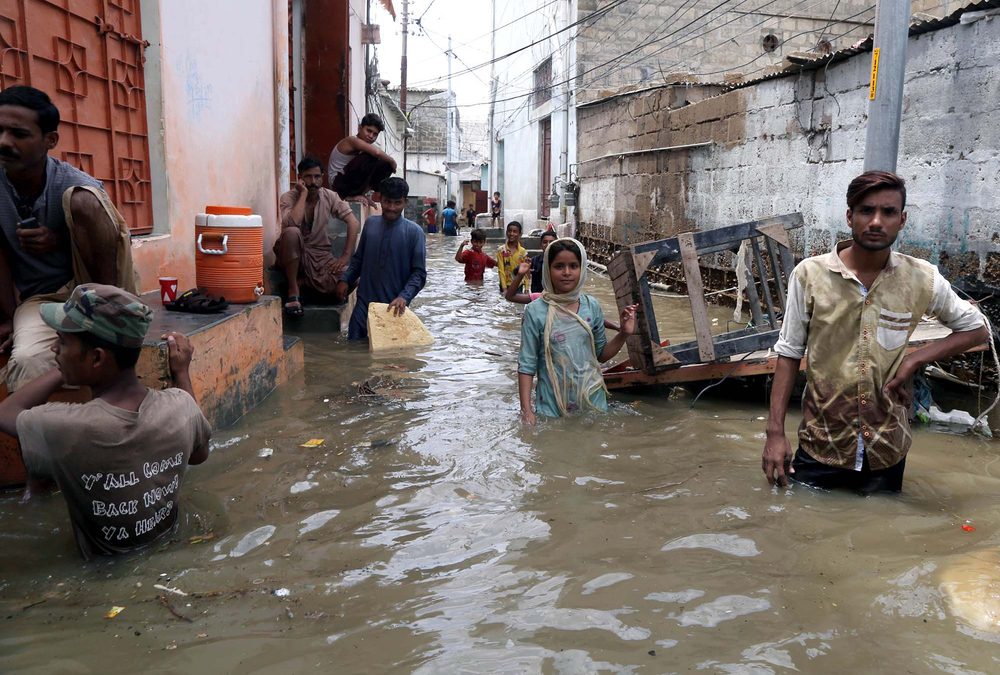 Residents in a flooded quarter of Karachi, Pakistan, August 2022 (Shutterstock)

The Climate Legacy of the British Empire

As the global media obsessed over the royal succession, one-third of Pakistan, a former British colony, was underwater.
By Basav Sen | September 28, 2022

When Queen Elizabeth passed away, much of the Western establishment’s reaction was one of uncritical mourning. Likewise, her successor King Charles’ ascent to the throne was greeted with celebration.

It’s one thing for world leaders to send formal condolences for a loss or congratulations for an ascendance. But in the United States, President Biden and House Speaker Nancy Pelosi ordered the flag to be flown at half staff, a rare honor for a foreign leader. And Pennsylvania Avenue in Washington, the iconic street that connects the White House to the Capitol, has been lined with British flags.

These gestures go way beyond customary diplomatic niceties. And to many of the billions of people who live in or have ancestral ties to former British colonies, they’re profoundly offensive.

Consider: As the global media obsessed over the royal succession, one-third of Pakistan, a former British colony, lay submerged.

The death toll from extreme flooding is already at 1,500, with nearly 700,000 people displaced in desperate conditions. In addition to homes, other essential infrastructure, including 18,000 schools, has also been damaged or destroyed. Flood survivors face serious risks of starvation and waterborne illnesses.

What does this have to do with the monarchy?

As part of British India, Pakistan and the Indian subcontinent were ruled by the British East India Company, and then the crown itself for centuries.

Indian economist Utsa Patnaik has calculated that the British empire plundered a staggering $45 trillion worth of resources from South Asia — along with millions of lives. British colonial economic and agrarian policies led to repeated, avoidable, and even human-made famines in South Asia where millions of people died.

These agrarian policies also included a state-owned drug smuggling racket, in which the British East India Company forced peasant farmers to grow poppies on extortionate terms, processed the poppies into opium, smuggled the product to China, and then fought two wars with the Chinese to force them to keep buying opium.

The impoverishment of South Asia funded the wealth of Britain — and with it, the Industrial Revolution and fossil-fueled economy that led in a straight line to the climate crisis.

Pakistan’s per capita greenhouse gas emissions are one-sixth that of the United Kingdom and less than one-sixteenth that of the United States. Emissions by wealthier countries have raised global temperatures and greatly increased the probability of severe monsoon rains in Pakistan and other formerly colonized countries that can least afford natural disasters.

So people in Pakistan, disproportionately poor and vulnerable, are paying a steep price for the pollution and imperial ambitions of others. The flood damage is estimated to be $30 billion, but wealthy countries like the United States and Pakistan’s former British colonizer have pledged less than one-third of 1 percent of what’s needed to repair the damage.

In short, colonial plunder is a major driver of climate change and the poverty that’s left the most affected countries struggling to adapt to it. And that’s without even touching the British colonial legacy in Asia, Africa, the Middle East or elsewhere.

That’s why the unthinking celebration of British royalty — at any time, but particularly during the disaster in Pakistan — appears so tone deaf and out of touch to those of us who have origins in the former colonies of the British Empire.

Helping these countries today should be seen as fulfilling a responsibility and as compensation for harm, not charity.