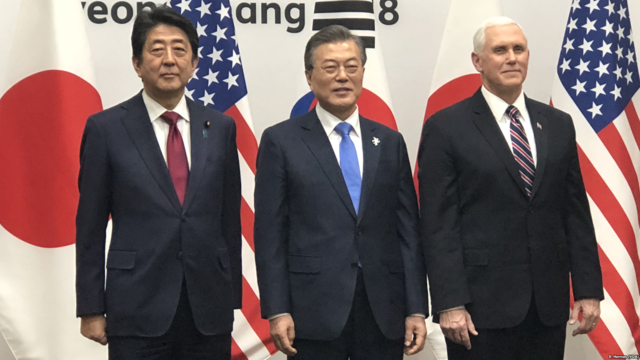 The Collapse of the East Asian Order

With Japan and South Korea in the middle of a feud, East Asia is on the verge of a serious unraveling.
By John Feffer | September 20, 2019

The United States is losing its status as a Pacific power. It can no longer control developments in East Asia. It still maintains a large military footprint in the region. But that military presence no longer translates into an ability to achieve the outcomes that Washington wants.

For better or worse, the post-World War II order in East Asia is coming to an end.

China has become the dominant economic player in East Asia, and it’s acquiring a military commensurate with its economic strength. Japan has been breaking out of the restraints of its “peace constitution” to build up its own military power. South Korea recently canceled its intelligence-sharing agreement with Japan, a cornerstone of the trilateral cooperation that Washington has urged on its two East Asian allies.

In a last-ditch effort, the Obama administration tried with its much-hyped Pacific pivot to reinsert the United States into the economic and security environment of East Asia. But the pivot didn’t happen. The U.S. military remained enmeshed in the conflicts of the greater Middle East. And the Trump administration immediately canceled U.S. participation in the Trans-Pacific Partnership, the free-trade agreement that was supposed to hitch the United States to the powerful economies of the east.

Donald Trump has further hastened the end of the post-war order with his pursuit of three primary goals in East Asia. He initiated a trade war with China to force the country to accede to U.S. demands regarding market access and other features of the Chinese economy. Beijing has not backed down.

Trump’s second imperative is to press U.S. allies to pay more for hosting U.S. troops. In early 2019, the United States and South Korea signed a one-year agreement – rather than the usual five-year agreement – in which Seoul agreed to raise its contribution by around 8 percent.  Last month, a new round of negotiations began. On his visit to Korea in August, National Security Advisor John Bolton reportedly demanded that Korea up its contributions to an astonishing $5 billion a year, a quintupling of the current amount.

Meanwhile, Trump is pushing the Abe government to increase military spending, in part to pay more for U.S. troops at bases in Japan but also for Tokyo to buy even more high-priced U.S. weapons.

Finally, Trump wants a deal with North Korea. But such a deal is not connected to any larger East Asian purpose. Trump simply wants to demonstrate that he can achieve something that his predecessors couldn’t.

None of these goals – confronting China, more allied burdensharing, a deal with North Korea – is new. All three policies have roots that go back to the 1990s. But Trump is taking more risks to achieve these goals. He is also paying little attention to the potentially high price of his actions.

The economic relationship between Beijing and Washington, for instance, may not recover, as China looks for other sources of key imports like soybeans and other markets for its exports. South Korea is not happy about the increased monetary demands from the United States. One recent sign of that unhappiness was the Blue House’s desire to expedite the return of 26 U.S. military bases to Korea.

And Trump’s on-again, off-again approach to North Korea has also complicated relations between Washington and Seoul. The cancellation of joint exercises has reduced military cooperation while the lack of sanctions relief for Pyongyang has blocked greater economic cooperation between north and south.

The United States always billed itself as a stabilizing influence in East Asia. In a region beset by longstanding rivalries, the United States intended to contain Japan by restricting it to a largely defensive military posture. Washington also worked hard to align the policies of Japan and South Korea, despite the unresolved territorial and historical disputes between the two countries. The U.S. military presence in the region was designed to prevent the rise of another hegemon.

The U.S. military remains in the region, but it no longer fulfills those goals. So, for instance, a

full-blown arms race is taking place in the region. Xi Jinping, determined to build a world-class military, will increase Chinese military spending by 7.5 percent next year. Combined with close trade relationships with the region, this improved military capacity means that China has emerged as precisely the hegemonic power that U.S. policy was intended to prevent.

Meanwhile, according to the Stockholm International Peace Research Institute, South Korea is now the tenth biggest military spender in the world, with Japan at number nine and China number two. Under Moon Jae-in, an otherwise progressive leader, South Korea increased its military budget by 8.2 percent in 2019, the largest increase since 2008, and plans increases of over 7 percent for 2020-2024.

Under Shinzo Abe, Japanese military spending has increased by 13 percent since 2013. With the military budget likely to set a new record next year, Japan is devoting a huge chunk of expenditures on U.S. weapons systems, like six new F35b, which each costs more than $130 million.

The United States, too, is increasing its military budget. But Trump seems determined to draw down U.S. forces overseas. The current burdensharing disputes may lead to a reduction of U.S. forces in Japan and South Korea.

True, the East Asian order that the United States helped build after World War II was not peaceful. It was founded on two wars – the Korean War and the Vietnam War. It relied on hundreds of military bases that increased the amount of violence in the host communities. It maintained a Cold War divide that is still strong and still justifies enormous outlays on the military.

But this order, for all of its obvious flaws, managed to keep a lid on the worst excesses of nationalism (just as the internationalist Communist order attempted to do the same on the other side of the Cold War divide).

The waning of U.S. influence in the region coincides with a powerful resurgence in nationalism. The most obvious example is Japan, where what had once been extremist views on Japan’s wartime conduct are now, thanks to Shinzo Abe, in the very mainstream. China, too, has become a much more explicitly nationalist country under Xi Jinping. South Korean nationalism has largely been subsumed under the project of reunification. A case in point is Moon Jae-in’s assertion last month that a united North and South Korean economy could leapfrog over Japan in “one burst.”

Donald Trump’s “America first” policies are perhaps the most explicitly nationalistic of them all. There wasn’t much any president could do to prevent the loss of U.S. power in the Pacific. But Trump’s approach has kindled nationalism and accelerated the arms race in the region.

As with Europe, U.S. withdrawal from Asia could have been accompanied by a strengthening of regional institutions of peace and cooperation. Instead, the collapse of the East Asian order has generated increased rivalry and conflict. Europe has largely transcended its twentieth-century history of war. Thanks in part to the short-sighted policies of the United States, East Asia is on the verge of repeating some very unfortunate history.