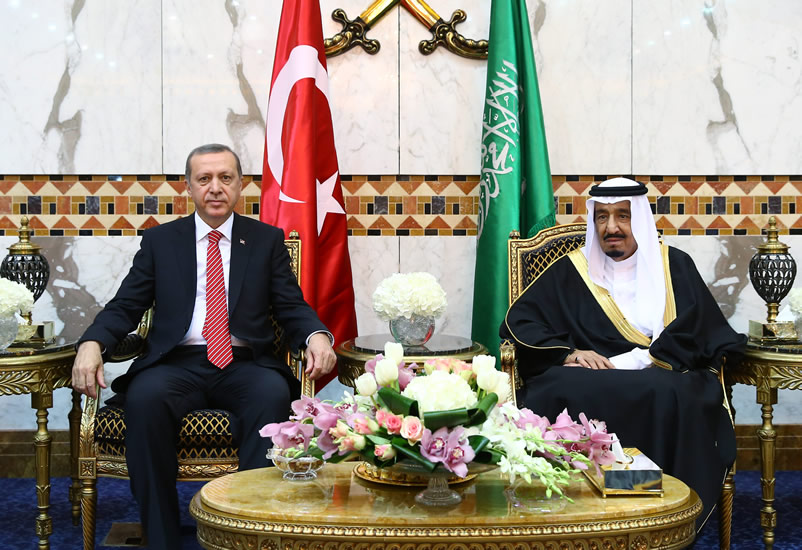 The Dark Saudi-Israeli Plot to Tip the Scales in Syria

The Saudis and the Turks are scaling up their support for Syrian jihadists while the Israelis contemplate a new war with Hezbollah.
By Conn Hallinan | June 8, 2015

A quiet meeting this past March in Saudi Arabia, and a recent anonymous leak from the Israeli military, set the stage for what may be a new and wider war in the Middle East.

Gathering in the Saudi Arabian capital of Riyadh were Turkish President Recep Tayyip Erdogan, newly crowned Saudi King Salman, and the organizer of the get-together, the emir of Qatar. The meeting was an opportunity for Turkey and Saudi Arabia to bury a hatchet over Ankara’s support — which Riyadh’s opposes — to the Muslim Brotherhood, and to agree to cooperate in overthrowing the Syrian government of Bashar al-Assad.

The pact prioritized the defeat of the Damascus regime over the threat posed by the Islamic State and al-Qaeda, and aims to checkmate Iranian influence in the region. However, the Turks and the Saudis are not quite on the same page when it comes to Iran: Turkey sees future business opportunities when the sanctions against Tehran end, while Riyadh sees Iran as nothing but a major regional rival.

The Turkish-Saudi axis means that Turkish weapons, bomb making supplies, and intelligence — accompanied by lots of Saudi money — are openly flowing to extremist groups like the al-Qaeda associated Nusra Front and Ahrar al-Sham, both now united in the so-called “Army of Conquest.”

The new alliance has created a certain amount of friction with the United States, which would also like to overthrow Assad but for the time being is focused on attacking the Islamic State and on inking a nuclear agreement with Iran.

This could change, however, because the Obama administration is divided on how deeply it wants to get entangled in Syria. If Washington decides to supply anti-aircraft weapons to the Army of Conquest, it will mean the United States has thrown in its lot with Turkey, Saudi Arabia, and Qatar — and that the “war on terror” is taking a backseat to regime change in Syria.

Not that the Americans are overly concerned about aiding and abetting Islamic extremists. While the U.S. is bombing the Islamic State in Iraq and Syria, the Obama administration is also training Syrians to overthrow Assad, which objectively puts them in the extremist camp vis-à-vis the Damascus regime. Washington is also aiding the Saudis’ war on the Houthis in Yemen. Yet the Houthis are the most effective Yemeni opponents of the Islamic State and the group called Al-Qaeda in the Arabian Peninsula, against which the United States is waging a drone war.

The Turkish-Saudi alliance seems to have already made a difference in the Syrian civil war. After some initial successes last year against divided opponents, the Syrian government has suffered some sharp defeats in the past few months and appears to be regrouping to defend its base of support in the coastal regions and the cities of Homs, Hama, and Damascus. While the Syrian government has lost over half of the country to the insurgents, it still controls up to 60 percent of the population.

Turkey has long been a major conduit for weapons, supplies, and fighters for the anti-Assad forces, and Saudi Arabia and most of its allies in the Gulf Coordination Council, representing the monarchies of the Middle East, have funneled money to the insurgents. But Saudi Arabia has always viewed the Muslim Brotherhood — which has a significant presence in Syria and in countries throughout the region — as a threat to its own monarchy.

The fact that Erdogan’s ruling Justice and Development Party is an offshoot of the Brotherhood has caused friction with the Saudis. For instance, while Turkey denounced the military coup against the elected Muslim Brotherhood government in Egypt, Saudi Arabia essentially bankrolled the takeover and continues to bail Cairo out of economic trouble.

But all that was water under the bridge when it came to getting rid of Assad. The Turks and the Saudis have established a joint command center in the newly conquered Syrian province of Idlib and have begun pulling the kaleidoscope of Assad opponents into a cohesive force.

A War on Hezbollah?

Three years of civil war has whittled the Syrian Army from 250,000 in 2011 to around 125,000 today, but Damascus is bolstered by Lebanon’s Hezbollah fighters. The Lebanese Shiite organization that fought Israel to a draw in 2006 is among the Assad regime’s most competent forces.

Which is where the Israeli leak comes in.

The timing of the story — published on May 12 in The New York Times — was certainly odd, as was the prominence given a story based entirely on unnamed “senior Israeli officials.” If the source was obscured, the message was clear: “We will hit Hezbollah hard, while making every effort to limit civilian casualties as much as we can,” the official said. But “we do not intend to stand by helplessly in the face of rocket attacks.”

The essence of the article was that Hezbollah is using civilians as shields in southern Lebanon, and the Israelis intended to blast the group regardless of whether civilians are present or not.

This is hardly breaking news. The Israeli military made exactly the same claim in its 2008-09 “Cast Lead” attack on Gaza and again in last year’s “Protective Edge” assault on the same embattled strip. It is currently under investigation by the United Nations for possible war crimes involving the targeting of civilians.

Nor is it the first time Israel has said the same thing about Hezbollah in Lebanon. In his Salon article entitled “The ‘hiding among civilians’ myth,” Beirut-based writer and photographer Mitch Prothero found that “This claim [of hiding among civilians] is almost always false.” Indeed, says Prothero, Hezbollah fighters avoid mingling with civilians because they know “they will sooner or later be betrayed by collaborators — as so many Palestinian militants have been.”

But why is the Israeli military talking about a war with Lebanon? The border is quiet. There have been a few incidents, but nothing major. Hezbollah has made it clear that it has no intention of starting a war, though it warns Tel Aviv that it’s quite capable of fighting one. The most likely answer is that the Israelis are coordinating their actions with Turkey and Saudi Arabia.

Tel Aviv has essentially formed a de facto alliance with Riyadh to block a nuclear agreement between Iran and the P5+1 — the United States, Russia, China, Britain, France, and Germany. Israel is also supporting Saudi Arabia’s attack on Yemen and has an informal agreement with Riyadh and Ankara to back the anti-Assad forces in Syria.

Israel is taking wounded Nusra Front fighters across the southern Syrian border for medical treatment. It’s also bombed Syrian forces in the Golan Heights. In one incident, it killed several Hezbollah members and an Iranian general advising the Syrian government.

The Realm of Uncertainty

The Saudis have pushed the argument that Syria, Iraq, and Yemen are really about Iranian expansionism and the age-old clash between Sunni and Shiite Muslims. Hezbollah is indeed a Shiite organization, and the majority of Iraqis are also members of the sect. Assad’s regime is closely associated with the Alawites, an offshoot of Shiism, and the Houthis in Yemen follow a variety of the sect as well.

However, the wars in the Middle East are about secular power, not divine authority — although sectarian division is a useful recruiting device. As for “Iranian aggression,” it was the Sunni-dominated regime of Saddam Hussein, bankrolled by Saudi Arabia and supported by the United States, that started the modern round of Sunni-Shiite bloodletting when Iraq invaded Iran in 1981.

If the Israeli Army attacks southern Lebanon, Hezbollah will be forced to bring some of its troops home from Syria, thus weakening the Syrian Army at a time when it’s already hard pressed by newly united rebel forces. In short, it would be a two-front war that would tie down Hezbollah, smash up southern Lebanon, and lead to the possible collapse of the Assad regime.

As Karl von Clausewitz once noted, however, war is the realm of uncertainty. All that one can really determine is who fires the first shot.

That the Israelis can pulverize scores of villages in southern Lebanon and kill lots of Shiites, there is no question. They’ve done it before. But a ground invasion may be very expensive, and the idea that they could “defeat” Hezbollah is a pipe dream. Shiites make up 40 percent of Lebanon’s sectarian mélange and dominate the country’s south. Hezbollah has support among other communities as well, in part because it successfully resisted the 1982-2000 Israeli occupation and bloodied Tel Aviv in the 2006 invasion.

An Israeli attack on Hezbollah, however, would almost certainly re-ignite Lebanon’s civil war, while bolstering the power of al-Qaeda and the Islamic State in Syria and Iraq. The Turks might think that al-Qaeda is no threat to them, but recent history should give them pause.

Creating something like the mujahedeen in Afghanistan and the anti-Gaddafi forces in Libya is not terribly difficult. Controlling them is altogether another matter.

“It Always Seems to Blow Back”

“Every power in the Middle East has tried to harness the power of the Islamists to their own end,” says Joshua Landis, director of Middle Eastern Studies at Oklahoma University. But “it always seems to blow back.”

The Afghan mujahedeen created the Taliban and al-Qaeda, the U.S. invasion of Iraq spawned the Islamic State, and Libya has collapsed into a safe haven for radical Islamist groups of all stripes. Erdogan may think the Justice and Development Party’s Islamic credentials will shield Turkey from a Syrian ricochet, but many of these groups consider Erdogan an apostate for playing democratic politics in secular institutions.

Indeed, up to 5,000 Turkish young people have volunteered to fight in Syria and Iraq. Eventually they will take the skills and ideology they learned on the battlefield back to Turkey, and Erdogan may come to regret his fixation with overthrowing Assad.

While it hard to imagine a Middle East more chaotic than it is today, if the Army of Conquest succeeds in overthrowing the Assad government, and Israel attacks Lebanon, “chaos” will be an understatement.