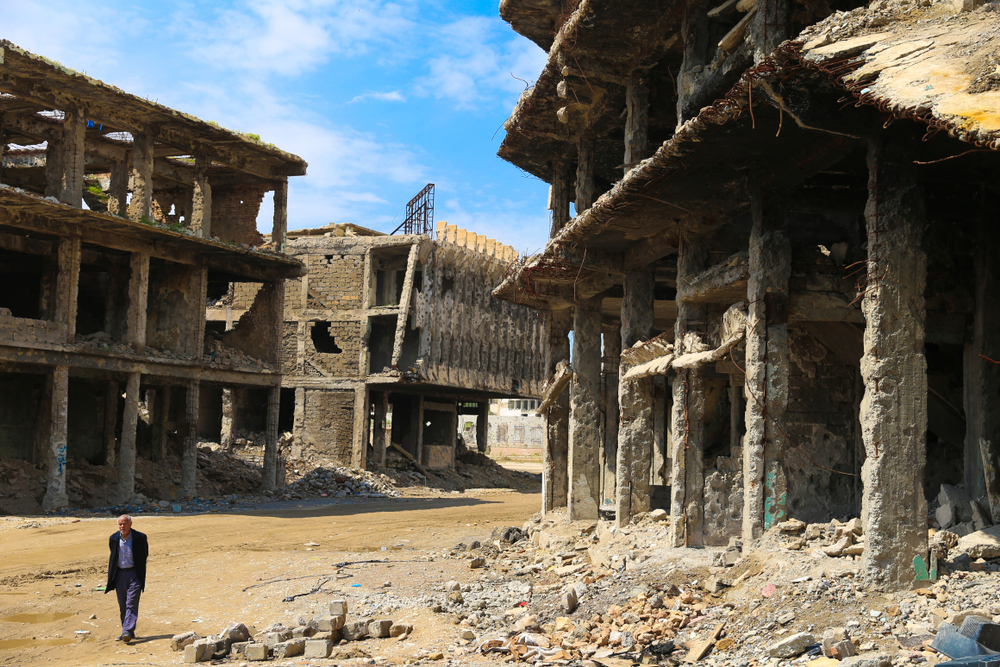 The Day I Became Antiwar

A personal recollection on the day that launched the Iraq War — and its lessons for us 18 years later.
By Peter Certo | March 24, 2021

On 9/11, I was a Catholic school eighth grader. I’ll never forget my teacher, Mrs. Anderson, saying simply: “I have something to tell you.” She explained something awful had happened and wheeled the TV into the room so we could see for ourselves.

That afternoon, we were sent to a prayer service in the neighboring church and then sent home early, all of us too shocked to teach or learn anything.

A year and a half later, when I was a freshman in Catholic high school, the TVs came out again.

In stark, night-vision footage, bombs exploded over Baghdad. This time, there were no hushed silences or prayer services. Instead, some people actually cheered. Then the bell rang, classes changed, and folks just carried on.

I trudged to my next class, heartsick and bewildered.

We were barely teenagers and here we were again, watching explosions vaporize human beings on TV. But this time, people were cheering? Going about their lives like normal? My adolescent brain couldn’t process it.

At 15, I wasn’t all that political. If I’d been more tuned in, I might’ve seen just how thoroughly my classmates had been conditioned to respond this way.

Even a year-plus into the war in Afghanistan, being antiwar still seemed aberrant in those shell-shocked days after 9/11 — even without any remotely plausible link between Iraq and 9/11.

There had been huge popular mobilizations against the Iraq War. But mainstream politicians — John McCain, John Kerry, Hillary Clinton, Joe Biden — got on board, often enthusiastically. Meanwhile, as the violence turned inward, hate crimes against anyone taken for Arab or Muslim were on the rise.

The “shock and awe” U.S. bombing campaign that opened the Iraq War killed nearly 7,200 civilians — more than double the number who died on 9/11. The latter was widely recognized as a generational trauma. The former was a footnote.

In the years that followed, upwards of a million Iraqis would die. But our political culture had so dehumanized these people that their deaths hardly seemed to matter — which is precisely why they occurred.

Fortunately, some things have changed since then.

Our post-9/11 wars are now widely viewed as costly mistakes. Overwhelming, bipartisan majorities of Americans now support ending our wars, bringing the troops home, and shoveling less money into the military — even if our politicians have scarcely complied.

But the risk of dehumanization remains. Americans may have tired of our wars in the Middle East, but surveys show they now express growing hostility to China. Worryingly, hate crimes against Asian Americans — like the recent mass murder in Atlanta — are spiraling upwards.

Russell Jeung, who leads an advocacy group dedicated to fighting anti-Asian bias, told the Washington Post, “The U.S.-China cold war — and especially the Republican strategy of scapegoating and attacking China for the [coronavirus] — incited racism and hatred toward Asian Americans.”

Scapegoating China for our own failed public health policies may live more on the right, but the Cold War rhetoric is bipartisan. Even politicians who condemn anti-Asian racism have stoked anti-Chinese sentiment over trade, pollution, or human rights — real issues, but none of which will be resolved by killing each other.

We’ve seen where dehumanization leads: to violence, war, and regret.

I’ll never forget my classmates — otherwise normal, well meaning kids — cheering those explosions. So speak up now, before it’s too late. Your kids are listening too.