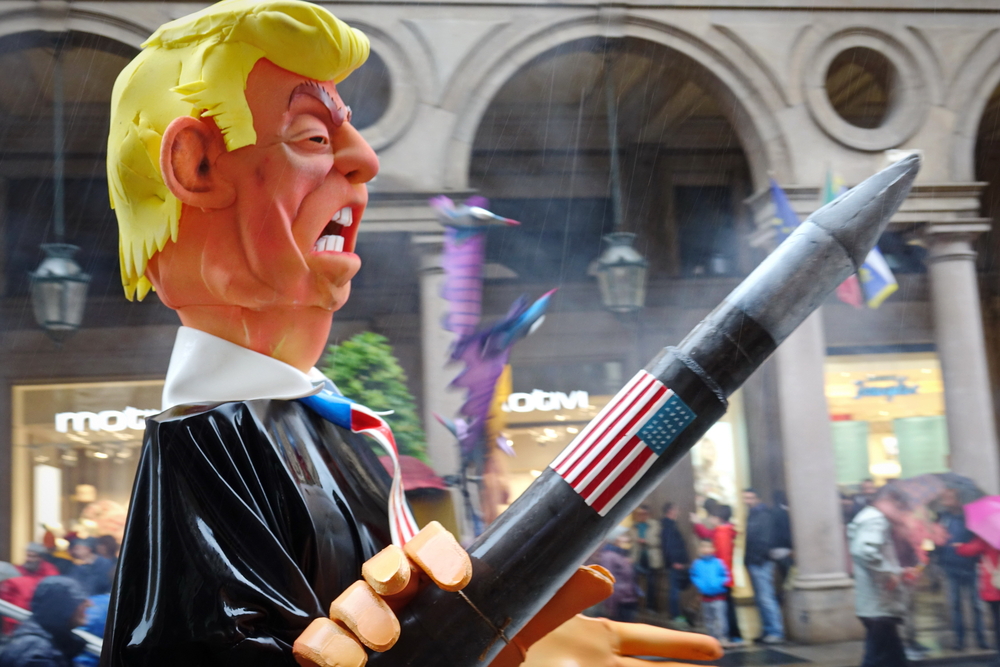 With the Trump administration unraveling what remains of the U.S. arms control regime, Democratic candidates desperately need to articulate their plans to avert a nuclear crisis.
By Lawrence S. Wittner | August 2, 2019

There is a remarkable incongruity between the existential danger of nuclear war and the absence of public discussion about preventing it.

This disconnect is all too apparent today, as arms control and disarmament treaties are scrapped, nations embark on vast nuclear weapons buildups, and governments threaten nuclear war against one another. Meanwhile, the mass media routinely avoids these issues but, instead, focuses on movie stars, athletes, and President Donald Trump’s latest tweeted insults.

Do I exaggerate? Consider the following.

In May 2018, the Trump administration unilaterally withdrew from the laboriously constructed Iran nuclear agreement that had closed off the possibility of that nation developing nuclear weapons. The U.S. pullout was followed by the imposition of heavy U.S. economic sanctions on Iran, as well as by thinly veiled threats by Trump to use nuclear weapons to destroy that country. Irate at these moves, the Iranian government recently retaliated by exceeding the limits set by the shattered agreement on its uranium stockpile and uranium enrichment.

At the beginning of February 2019, the Trump administration announced that, in August, the U.S. government will withdraw from the Reagan-era Intermediate-Range Nuclear Forces (INF) Treaty ― the historic agreement that had banned U.S. and Russian ground-launched cruise missiles ― and would proceed to develop such weapons. On the following day, Russian President Vladimir Putin declared that, in response, his government was suspending its observance of the treaty and would build the kinds of nuclear missiles that the INF treaty had outlawed.

The next nuclear disarmament agreement on the chopping block appears to be the 2010 New START Treaty, which reduces U.S. and Russian deployed strategic nuclear warheads to 1,550 each, limits U.S. and Russian nuclear delivery vehicles, and provides for extensive inspection.

According to John Bolton, Trump’s national security advisor, this treaty, scheduled to expire in February 2021, is “unlikely” to be extended. To preserve such an agreement, he argued, would amount to “malpractice.” If the treaty is allowed to expire, it would be the first time since 1972 that there would be no nuclear arms control agreement between Russia and the United States.

One other key international agreement, which President Clinton signed ― but, thanks to Republican opposition, the U.S. Senate has never ratified ― is the Comprehensive Test Ban Treaty (CTBT). Adopted with great fanfare in 1996 and backed by nearly all the world’s nations, the CTBT bans nuclear weapons testing, a practice which has long served as a prerequisite for developing or upgrading nuclear arsenals. Today, Bolton is reportedly pressing for the treaty to be removed from Senate consideration and “unsigned,” as a possible prelude to U.S. resumption of nuclear testing.

Nor does it seem likely that any new agreements will replace the old ones. The U.S. State Department’s Office of Strategic Stability and Deterrence Affairs, which handles U.S. arms control ventures, has been whittled down during the Trump years from 14 staff members to four. As a result, a former staffer reported, the State Department is no longer “equipped” to pursue arms control negotiations. Coincidentally, the U.S. and Russian governments, which possess approximately 93 percent of the world’s nearly 14,000 nuclear warheads, have abandoned negotiations over controlling or eliminating them for the first time since the 1950s.

Instead of honoring the commitment, under Article VI of the 1968 nuclear Nonproliferation Treaty, to pursue negotiations for “cessation of the nuclear arms race” and for “nuclear disarmament,” all nine nuclear powers are today modernizing their nuclear weapons production facilities and adding new types of nuclear weapons to their arsenals. Over the next 30 years, this nuclear buildup will cost the United States alone an estimated $1,700,000,000,000 ― at least if it is not obliterated first in a nuclear holocaust.

Will the United States and other nations survive these escalating preparations for nuclear war?

That question might seem overwrought, but in fact the U.S. government and others are increasing the role that nuclear weapons play in their “national security” policies. Trump’s glib threats of nuclear war against North Korea and Iran are paralleled by new administration plans to develop a low-yield ballistic missile, which arms control advocates fear will lower the threshold for nuclear war.

Confirming the new interest in nuclear warfare, the U.S. Joint Chiefs of Staff, in June 2019, posted a planning document on the Pentagon’s website with a more upbeat appraisal of nuclear war-fighting than seen for many years. Declaring that “using nuclear weapons could create conditions for decisive results and the restoration of strategic stability,” the document approvingly quoted Herman Kahn, the Cold War nuclear theorist who had argued for “winnable” nuclear wars — and who provided an inspiration for Stanley Kubrick’s satirical film, Dr. Strangelove.

Of course, most Americans are not pining for this kind of approach to nuclear weapons. Indeed, a May 2019 opinion poll by the Center for International and Security Studies at the University of Maryland found that two-thirds of U.S. respondents favored remaining within the INF Treaty, 80 percent wanted to extend the New START Treaty, about 60 percent supported “phasing out” U.S. intercontinental ballistic missiles, and 75 percent backed legislation requiring congressional approval before the president could order a nuclear attack.

Therefore, when it came to the recently concluded round of Democratic presidential debates, one would expect the CNN moderators ― as stand-ins for the American public ― to ask the candidates some questions about nuclear weapons dangers and how to reduce them. Nevertheless, in five hours of grilling the would-be Democratic nominees over July 30 and 31, the moderators steered clear of the issue of how they would deal with the alarming drift toward nuclear war.

The only time when the CNN moderators broached the subject of what should be done about the world’s 14,000 nuclear weapons was when ― in line with their frequently hostile questions ― Jake Tapper asked Senator Elizabeth Warren about her proposal to “make it U.S. policy that the U.S. will never use a nuclear weapon unless another country uses one first.”

Warren’s proposal, Tapper added, had been rejected by the Obama administration and would force the United States to “tie its own hands with that policy.” In response, Warren gamely argued that a nuclear first strike policy heightened the risks of an outbreak of nuclear war. Tapper then called upon Montana Governor Steve Bullock, who retorted that he “wouldn’t want to take that off the table.”

Tapper’s question, of course, was not directed toward averting nuclear war, but rather toward facilitating its onset.

On occasion, some candidates managed to break through CNN’s blockade on a wide-ranging discussion. Using her closing statement, Representative Tulsi Gabbard departed from the network’s priorities and denounced “Donald Trump and warmongering politicians in Washington” for “pushing us closer and closer to the brink of nuclear catastrophe.” But, given the many other questions asked of the candidates and the very limited time they were accorded for answers, their resistance couldn’t get very far.

Surely the American people, as well as people around the globe, deserve a better discussion than fostered by the mass communications media of how to prevent nuclear war.

This is a revised version of an article published by the History News Network on July 28, 2019.

Lawrence Wittner  is Professor of History Emeritus at SUNY/Albany and the author of Confronting the Bomb (Stanford University Press).