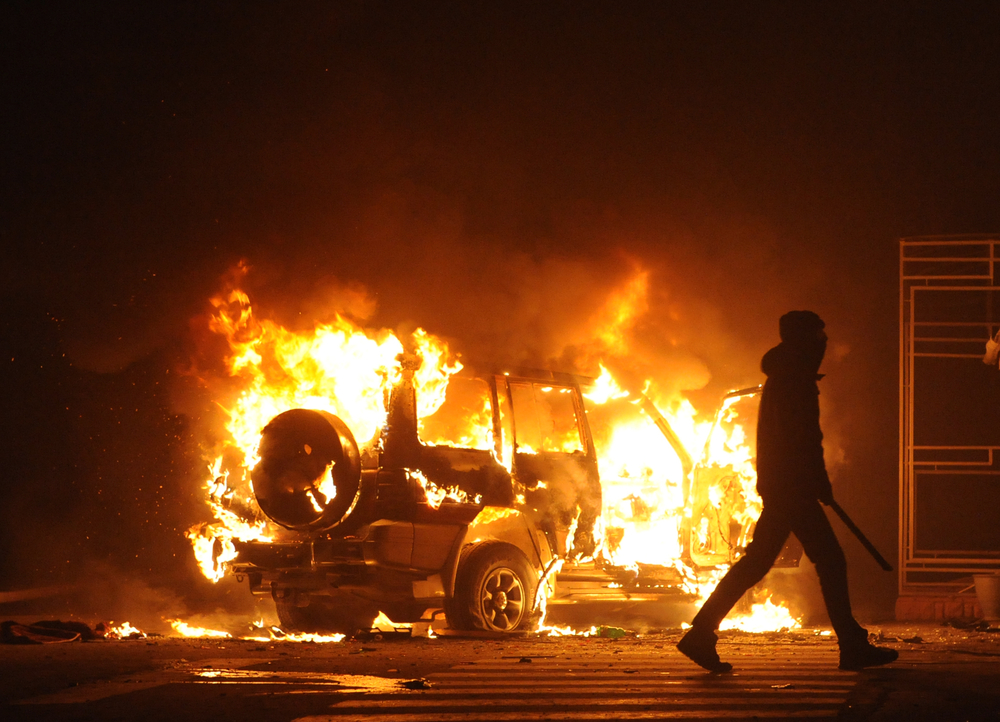 The Descent of America

America’s racism is destroying its advanced status in real time — and with it, the most redeeming parts of liberal internationalism.
By John Feffer | June 3, 2020

Complaints about American decline have been commonplace since at least the Vietnam War era.

In the late 1980s, declinism experienced an upsurge with the publication of The Rise and Fall of Great Powers, by Paul Kennedy, which warned of the dangers of imperial overstretch. Even America’s putative victory over the Soviet Union in the Cold War represented only a minor lull in the chatter about the erosion of U.S. status relative to other countries, particularly a rising China.

Closer to home, meanwhile, the grumbling over America’s crumbling usually spikes around the release of the American Society of Civil Engineers’ quadrennial infrastructure report card.

In 2017, the ASCE awarded America a D+ for the state of its roads, bridges, schools, parks, and public transportation. The grade was no surprise to many Americans. “This is an advanced economy?” people ask themselves as they wait for a broken-down bus, hit a pothole on the highway, turn away from the undrinkable water coming out of their taps, or drop their child at a school that’s just a few steps away from being condemned.

In U.S. schools, D is unsatisfactory but still officially passing. In terms of infrastructure, the United States teeters perilously on the edge of failure.

In the last few months, however, America has gone over the edge. The country has quickly, recklessly, impulsively entered the failure zone.

First, there’s the failure of leadership. The country has been ruled for the last three years by a corrupt, incompetent, would-be dictator who, when faced with a spate of crises, has proven spectacularly unfit for the job.

Second, there’s the failure to protect American lives. More than 100,000 people have died from the coronavirus, a level of death generally seen only in wartime.

Third, there’s the failure of the American dream. The economy has collapsed due to the coronavirus, and the unemployment rate has surged to nearly 20 percent.

Finally, there’s the chronic failure of American racism. In the last week, people have taken to the streets to protest the death of yet another African American at the hands of the police. On May 25, a police officer in Minneapolis handcuffed George Floyd on suspicion of forgery, pinned him to the ground, put a knee on his neck, and killed him. Floyd was one of over 7,500 people killed by the police since 2013.

Protestors are fed up with police profiling, targeting, and killing. But they are also outraged at the disproportionate impact of the pandemic and the economic collapse on people of color. The anger is entirely understandable. “I can’t breathe” applies to victims of police violence and the coronavirus both.

The protests themselves are a sign of hope, notwithstanding the over 60,000 National Guard that have poured onto the streets in 24 states.

Also hopeful are the expressions of solidarity during these protests. Cops in a number of cities have gotten down on one knee with protestors. Several mayors, like Atlanta’s Keisha Lance Bottoms, have spoken truth to the power of the president. Here in Washington, the owner of a restaurant burned by looters said, “Any kind of issue like this seems pretty minor. We have been through three months of being closed; we have seen 100,000 people die. I think the protests are great, and I think they are warranted.”

And yet, if you add up the economic, political, social, and medical deficits, it’s hard to imagine calling America an advanced industrialized nation at the moment. It is extraordinary to see such a rapid loss of status in real time, as opposed to a time-lapse animation of the rise and fall of some ancient civilization. “I’ve seen this kind of violence,” a former CIA analyst responsible for tracking developments in China and Southeast Asia told The Washington Post. “This is what autocrats do. This is what happens in countries before a collapse.”

The middle and upper classes may well be caught by surprise. But the current protests are a potent reminder that for a sizable portion of the American population, the country has never been advanced because they live in what Michael Harrington, nearly 60 years ago, called “the other America.”

Donald Trump has always positioned himself as a law-and-order politician, even as his words and actions create disorder and violate laws.

He never possessed much if any empathy for victims of police violence. In response to George Floyd’s death, after a cursory expression of condolence, Trump quickly pivoted to deriding protesters, Democratic governors, “THUGS,” and the like. He promised that anyone who breached the White House fence would be met by “the most vicious dogs, and most ominous weapons.” He announced that he would declare the antifa movement a terrorist organization. He sounded like a minor-league dictator with his tweet that “when the looting starts, the shooting starts.”

Later, on a call with governors, he suggested that “if you don’t dominate, you’re wasting your time — they’re going to run over you, you’re going to look like a bunch of jerks.” He added, “You have to arrest people, and you have to try people, and they have to go jail for long periods of time.” Afterwards, in the Rose Garden, Trump said, “If a city or state refuses to take the actions necessary to defend the life and property of their residents, then I will deploy the United States military and quickly solve the problem for them.”

Despite Trump’s calls for law and order, the far right is actually cheering on the occasional violence of the protests because it feeds into their attempts to push the country into a race riot. Militia members, white extremists, and “boogaloo bois” want to take advantage of the coronavirus crisis to “accelerate” the demise of liberal, multicultural America. They’ve even showed up at the protests against police violence and promoted their own violent actions online.

Following his own version of accelerationism, the president has done everything within his power to destroy the country from within, using hateful language, implementing polarizing policies, and seeming to revel in the chaos that his administration has fostered. Declaring some version of martial law to contain the chaos he has helped to create — but in reality to promote more chaos and himself as the only person to address it — may be the only hope he has at this point of gaining a second term in office.

As Edward Luce writes in the Financial Times, “Trump makes little disguise of conjuring a pre-civil rights America where white males held uncontested sway.” Ultimately, though, it’s Trump himself who wants uncontested sway, and he thinks he can crowd-surf the unrest toward that goal.

There’s always been an element of racism to Donald Trump’s foreign policy.

From day one, for instance, Trump favored predominantly white countries in his immigration policy, instituting a Muslim travel ban and denigrating “shithole countries” when “we should have more people from places like Norway.” He told four U.S. congresswomen — three of them born in the United States — to “go back and help fix the totally broken and crime infested places from which they came.” He relishes blaming the coronavirus outbreak on “the Chinese,” knowing full well that his conspiracy theories feed into anti-Asian sentiment.

Of course, either money or nuclear weapons can turn a “shithole” country into a friend, with Trump cozying up to Kim Jong Un of North Korea and Mohammed bin Salman of Saudi Arabia. That’s always been Trump’s modus operandi: he is truly race-blind when it comes to the powerful.

Donald Trump didn’t suddenly introduce racism into U.S. foreign policy. As I wrote back in January 2018, “Trump was only putting into words an underlying principle of U.S. foreign policy. For decades, the United States has treated countries like ‘shitholes’ even if policymakers haven’t called them such, at least not in public.” Racism is reflected in U.S. budget priorities, in the minuscule size of foreign aid programs, in the pattern of U.S. interventions, in the racial composition of the U.S. Army’s “essential workers” (otherwise known as grunts), and even in the Pentagon’s militarization of domestic policing. Trump certainly didn’t create any of these dynamics, though he has often aggravated them.

Still, the current president’s elevation of racism is not simply rhetorical. There is method to his mania.

Trump is using racism as a tool to destroy whatever lingering commitment the United States has to liberal internationalism. The latter philosophy inspired Americans to help create the United Nations, launch the Peace Corps, administer foreign aid programs, and collaborate with other countries to fight global warming. This liberal internationalism has always had its defects, from paternalism to naivete. But it’s a damn sight better than the illiberal nationalism that Trump offers as an alternative.

Trump’s deployment of racism at home and abroad cuts the legs out from under liberal internationalism. No other country can take America’s human rights rhetoric seriously. No other country can accept America’s claim to impartiality as a broker of peace deals, climate deals, any deals. First put your own house in order, they will say.

Putting our own house in order has long been the motivation of U.S. social movements. Think of the civil rights movement, the LGBT rights movement, the Black Lives Matter movement. They have also inspired human rights movements devoted to home improvement in countries around the world. Even today, the U.S. protests against police violence have inspired nearly 15,000 people to demonstrate in Paris, 10,000 demonstrators in Amsterdam, tens of thousands in Auckland, thousands in London and Berlin and throughout Australia.

U.S. support of human rights abroad can and should be an extension of these social movements. That’s something that Trump’s racism at home and attacks on liberal internationalism abroad threaten as well.

“Let’s hope the demonstrations all over the world will help remind Washington that U.S. soft power is a unique asset, setting America apart from other great powers — from China, Russia, and even from Europe,” observes Wolfgang Ischinger, former German ambassador to the United States. “It would be tragic if the Trump administration turned a huge opportunity for the U.S. into a moral abdication.”

Unfortunately, Trump has his own ideas of how to put the American house in order up to and including burning the house down. The antidote to Trump’s racist nationalism is not less internationalism but more: rejoining the international bodies that Trump pulled out of, reentering the accords that Trump unsigned, patiently rebuilding U.S. engagement in the world on an equal basis.

Such a re-engagement has to go hand in hand with a difficult reckoning with America’s own racism, for the inequality perpetuated domestically mirrors the inequality maintained on a global scale.

Only in this way can America stop its descent and climb back into the community of nations.