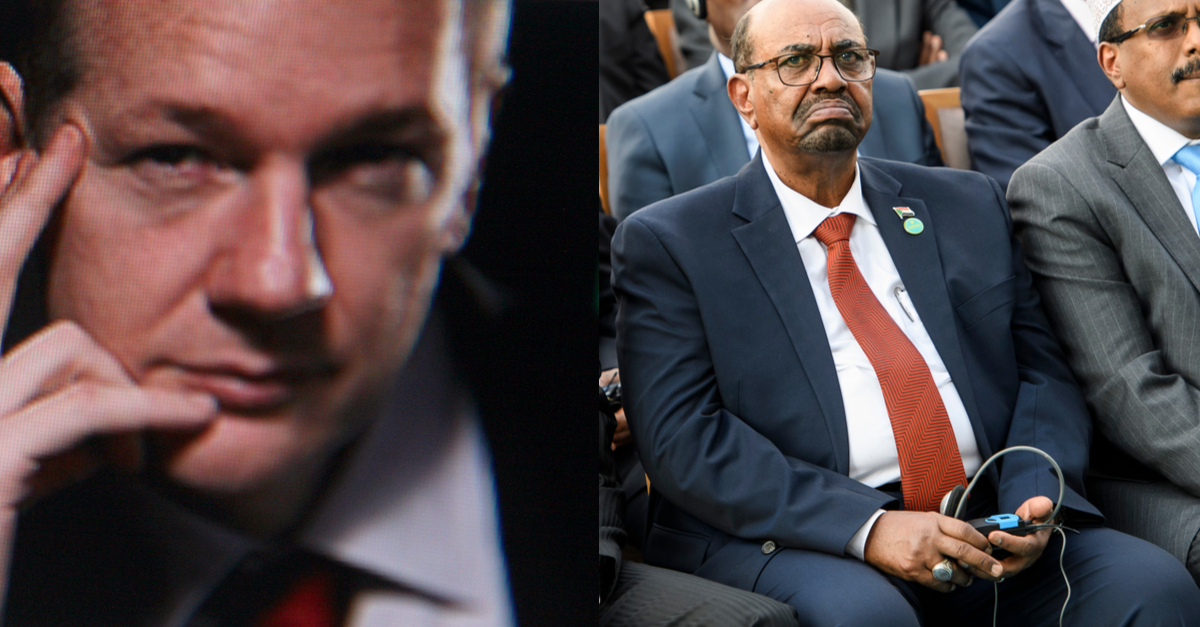 The Dictator and the Nihilist

Whistleblowers and protesters play a key role in ensuring accountability. But ultimately, democratic systems should be built to ensure institutional accountability.
By John Feffer | April 17, 2019

British authorities dragged Julian Assange, the co-founder of Wikileaks, out of the Ecuadorian consulate and into custody. Meanwhile, months of public protests finally dislodged Omar al-Bashir, the long-serving authoritarian leader of Sudan.

On the face of it, Assange and Bashir couldn’t be more different. Bashir presided over a tyrannical state that waged genocidal war and kept tight control over information. Assange, on the other hand, used the medium of the Internet to leak information that exposed abuses of power and challenged official versions of war.

Yet the two shared an underlying commonality: lack of accountability. This trait proved to be their ultimate undoing.

Julian Assange stands accused of two separate types of crime. He originally took refuge in the Ecuadorian embassy in 2012 to avoid extradition to Sweden, where he faced charges of sexual assault and rape. During his stay in the embassy, one charge ran out because of the statute of limitations. Now that Assange is extraditable, the Swedish authorities can revive the second charge, which doesn’t expire until 2020.

But Assange has also been in the crosshairs of the U.S. authorities ever since he released a trove of information in 2010, courtesy of whistleblower Chelsea Manning, about U.S. military conduct in Afghanistan and Iraq. The specific charge for which Washington wants Assange extradited to stand trial is connected to this whistleblowing, but only peripherally. The indictment reads:

On or about March 8, 2010, Assange agreed to assist Manning in cracking a password stored on United States Department of Defense Computers connected to the Secret Internet Protocol Network, a United States government network used for classified documents and communications.

To get around the five-year statute of limitations on hacking, which expired some time ago, the United States is charging Assange with an act of terrorism.

So, Assange stands accused of a criminal act: hacking, not publishing. This isn’t, in other words, a First Amendment issue. On the other hand, the U.S. case is very thin indeed. Terrorism? Hardly. And there’s no evidence that Assange actually engaged in the alleged hacking, though hacking certainly played an instrumental role in his earlier life in Australia.

Assange shouldn’t be extradited to the United States where the government might expand the inquiry and turn the man into a First Amendment martyr. He should, however, face his accusers in Sweden.

By most standards, Assange is a thoroughly unpleasant fellow. “He was an unstable figure who was an unfortunate avatar for press freedom,” observes Alex Gibney, the director of the documentary We Steal Secrets: The Story of WikiLeaks. “I think instinctively, he was always kind of a renegade and also a narcissist, and self-serving and mendacious.”

Paranoid and domineering, Assange once told his erstwhile Wikileaks partner, Daniel Domscheit-Berg, “If you fuck up, I’ll hunt you down and kill you.” Sequestered inside the Ecuadorian embassy for nearly seven years, Assange was, to the say the least, a boorish guest: fighting with his hosts, treating the place as if he owned it, and breaking the rules of his stay by continuing to run his political operations (including his interventions on behalf of Donald Trump during the 2016 presidential elections).

A jerk, a hacker, possibly a rapist: these all suggest that Julian Assange believes that the normal rules of society don’t apply to him. It’s hard to understand why he became a hero of the left simply because he published materials that put the U.S. military in the worst light possible. It’s even harder to understand why he remains a hero for a diminishing sliver of the left after his hatred of Hillary Clinton pushed him to do whatever he could to support Trump’s political ambitions.

Assange doesn’t care about politics. He doesn’t even care about transparency. He’ll align with the most non-transparent state and individuals (Russia, Trump) to pursue his own personal grudges. In the case of his work on behalf of Trump, his motives were even more opportunistic: a potential pardon.

But what makes Assange particularly detestable is his complete lack of accountability. He is an anarchist — not in the precise political sense of a follower of Bakunin or Bookchin, but in his preference for the destruction of the established order. He will do whatever he can to undermine order, whether that order is legitimate or illegitimate. He is sometimes described as a libertarian because of his defense of civil liberties and admiration for Ron and Rand Paul. But, frankly, Assange is just interested in his own liberty, his own freedom to do what he wants. He’s even more of a nihilist than Trump, for he has no idea of what should replace the status quo he so despises.

When Daniel Ellsberg and Edward Snowden made the decision to declassify government documents, they did so with the help, support, and counsel of journalists. In other words, they submitted to the accountability mechanisms of the newspaper world — fact-checkers, lawyers, national security experts.

Assange did no such thing. He dumped everything into the public realm uncurated. The material could be wrong. It could be weaponized. It could hurt ongoing peace negotiations. Assange didn’t care. Wikileaks, with its disregard for normal journalism practices, has contributed greatly to the spread of “fake news,” of conspiracy theories, of contempt for media outlets like CNN. In some cases, as with the allegation that DNC staffer Seth Rich was the source of the Democratic Party hacks, Assange directly provided grist for the rumor mill that has increasingly replaced journalism.

This, then, is Assange’s greatest sin. He acts like a tyrant, though he controls no state and no territory. Perhaps he will be found guilty in a court of law in Sweden and go to jail. Otherwise, being an unaccountable jerk is not a crime. For his sins, I’d just be happy to see Assange consigned to obscurity.

Omar al-Bashir had a nearly 30-year reign over Sudan. He aspired to exert totalitarian control over this North African country by banishing civil society and eradicating rival political forces. He continued a devastating civil war with the southern part of the country and started a genocidal conflict with the Darfur region. In a desperate bid to win favor with the United States, he cooperated with George W. Bush’s global war on terrorism.

None of this prevented a final reckoning at the hands of the Sudanese people themselves.

There are many reasons why the Sudanese rose up against their ruler. The economy, for instance, is in terrible shape. This is the result of mismanagement, corruption, and the loss of significant oil revenues when South Sudan became independent and took control of the vast majority of oil production.

Even the lifting in 2017 of most U.S. sanctions against Khartoum — in an effort to enlist Sudan’s help in further isolating North Korea — didn’t seem to help, as the inflation rate rose to 70 percent in 2018. Another round of price increases for food sparked protests last December. Meanwhile, as was the case in all of the Arab Spring countries, the youth unemployment rate in Sudan has been inordinately high, hovering around 27 percent for years.

Sudan has also been at war for much of its post-colonial existence: two civil wars, an internal conflict in Darfur, and, for the last few years, participation in the Saudi-led war in Yemen where Sudan has sent as many as 14,000 soldiers. Most of these fighters have come from Darfur where, as part of the Janjaweed militia, they were largely responsible for the genocide there. Hundreds of these soldiers have died in Yemen. Given the high costs and the minimal benefits of this military campaign, members of the Sudanese parliament last year began questioning the country’s participation.

Bashir’s lack of accountability plays a major part in all this. Although Sudan has held multi-party elections since 2010, the ruling party has used the machinery of the state to maintain its grip on power, freezing out the opposition and ensuring that the Sudanese people have little to no say in political affairs.

Even in the face of gross human rights violations in Darfur, Bashir managed to evade the mechanisms of international accountability. Until recently, Bashir was the only sitting world leader wanted by the International Criminal Court for genocide, war crimes, and crimes against humanity. Under some circumstances, a population might be expected to rally around a leader stigmatized by the international community, as Russians have maintained their support for Vladimir Putin. But Bashir’s crimes were against his own people. No surprise they wanted him out.

The protesters in Sudan hold more than just Bashir accountable. The actual force behind Bashir’s ouster was the military, a least a portion of which squared off against the security police in defense of the protesters.

But the protesters have not wanted a military dictatorship to replace Bashir’s personal dictatorship. They’ve called for the “full dissolution of the deep state.” Whether because of public pressure or internal division, the leader of the transitional military council resigned after only one day on the job. The head of the security forces, Salah Gosh, was next to step down.

Meanwhile, negotiations between the military and the protesters have resulted in the release of political prisoners, the barring of the former ruling party from any transitional government, and a pledge that civilians will serve as prime minister and the head of all ministries aside from the ministries of defense and interior.

Just as Assange should head to Sweden, Bashir should travel to the Hague to face justice. The transitional council has insisted on putting Bashir on trial in Sudan, though a civilian government might overrule that decision. The former dictator is now sitting in Kobar prison, where he once sent those who opposed his reign.

The Consequences of Accountability

The aging leaders of Algeria and Sudan are now deposed. There is talk of another Arab Spring in the region. But a repeat of 2011 is not likely given the hold on power that Mohammed bin Salman has in Saudi Arabia, the victory of Benjamin Netanyahu in the recent Israel elections, the way Bashar al-Assad has clung to his position in Syria, and the brutality with which Abdel Fattah al-Sisi has enforced his reign in Egypt. The United States stands firmly behind Saudi Arabia, Israel, and Egypt. Russia and Iran back Assad. In the short term, let’s hope that both Algeria and Sudan simply avoid the fate of Libya, namely horrific civil war.

If the United States changes its Middle East policy and stops supporting dictatorships and right-wing leaders, then a real wave of accountability could sweep through the region. But that depends on what happens in the 2020 elections.

In other words, American voters not only can hold the Trump administration accountable in 2020 by voting it out and even putting some of its top officials on trial. They can lay the groundwork for a rehabilitation of the national mechanisms of accountability (like the Consumer Financial Protection Bureau that Trump is dismantling) as well as the international mechanisms (like the International Criminal Court that Trump has attacked). And they can elect politicians who have zero tolerance for unaccountable leaders in the Middle East and elsewhere around the world.

Whistleblowers and protesters play a key role in ensuring accountability. But ultimately, democratic systems should be built to ensure institutional accountability. That’s what the protesters in Sudan so desperately want in the wake of Omar Bashir. That’s what nihilists like Julian Assange, in their hatred of government, so cavalierly dismiss.

Perhaps the departure of Bashir and Assange will signal a new wave of accountability that will eventually reach the shores of the United States as well — in time to drain the swamp in 2020.