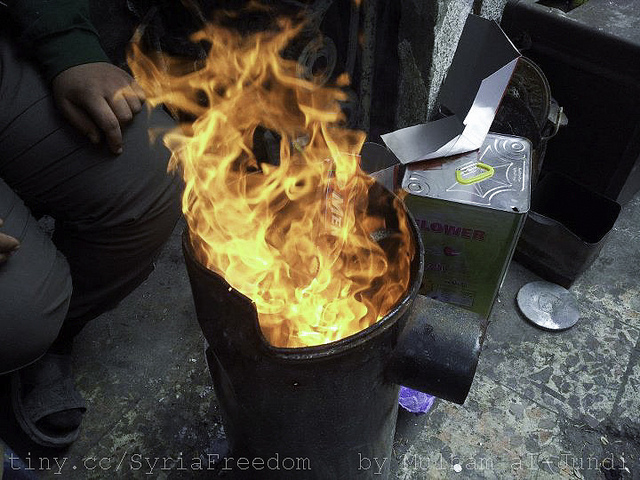 The Gas of August: Syria and Regional Conflagration

It is perhaps hackneyed to refer to Syria as a tinderbox or a powder keg, but that's exactly what it is.
By Scott Ryan Charney | August 29, 2013

I’ve always thought that Bashar Al-Assad often has an uncomfortable look on his face, as if he never envisioned he would be Syria’s president, and never quite got accustomed to the idea.

This make sense, inasmuch as he only seemed destined for the role after his elder brother Bassel died in a car crash in 1994. Now, 13 years after taking office following the death of his father Hafez, “uncomfortable” is an understatement. Syria has been rent by civil war for more than two years. The conflict has spread to the rest of the region, and now a direct military intervention by (at least) the United States, France, and the United Kingdom is a distinct possibility.

This is a frightening development. The Western powers now threatening to strike Syria are using the language of humanitarianism—take Secretary of State John Kerry’s recent condemnation of Assad’s alleged use of chemical weapons as a “moral obscenity,” among many other remarks. If indeed the governments of Barack Obama, Francois Hollande, and David Cameron are serious about intervening in the Syrian conflict in order to bring about an end to the humanitarian crisis wrought by the war, their assumptions rest upon a fundamental misunderstanding of these sorts of situations in general, and the present one in particular.

Simply put, war does not work that way.

Some of President Obama’s advisers are offering the 1999 NATO strikes on Serbia as a useful precedent for a similar attack on Syria. This group famously includes Ambassador to the United Nations Samantha Power, who authored a widely read book on the subject and is perhaps today’s most prominent advocate of “humanitarian intervention.” Outside of government, Niall Ferguson has joined in with the battle cry, tarring his opponents with the “isolationist” label.

As a professor of history at Harvard, Ferguson really ought to know better, because if anything the NATO intervention in the Kosovo War demonstrates that such action usually just makes things worse. The 78 days of air strikes did largely bring the war to a close, and with it the violence and expulsions committed by the Serbian forces against the Kosovo Albanians. These atrocities, though sometimes exaggerated, were all too real.

However, such ethnic cleansing actually increased during (and probably in response to) the bombing campaign. On top of that, thanks to the bombing, the Kosovo Liberation Army, which started that particular phase of the Yugoslavian Civil Wars in the first place (thus prompting a heavy-handed and vicious Serbian crackdown) was able, thanks to the NATO intervention, to commit ethnic cleansing against the Kosovo Serbs, and almost completely eliminated Kosovo’s Romani (or Gypsy) population. Also, the air strikes killed civilians on both sides, as well as some of the staff at the Chinese embassy in Belgrade. At the end of the conflict, NATO forces very nearly got into a deliberate firefight with Russian troops, which could have had catastrophic consequences.

Committing one’s military to war overseas for purely selfless reasons is so rare as to be nonexistent, not least because it invariably involves casualties and usually has serious unintended consequences. In 1995, earlier in the breakup of Yugoslavia, NATO aircraft attacked Serbian forces following Serbian war crimes against Bosnian civilians, thus playing a large part in ending the Bosnian phase of the war. Problematically, the Serbs were not the only faction committing atrocities (though theirs were usually larger), and there are some damning unresolved questions about the actions of the Bosnian government regarding the Srebrenica Massacre. NATO’s recent intervention in Libya greatly helped to topple the Gaddafi regime—and promptly turned the country (which had the highest Human Development Index in Africa) over to militiamen with a predilection for racist pogroms, among other things.

There are more successful examples, to be sure. The Indian intervention in the Bangladesh Liberation War (1971) ended the massacres being committed by the Pakistani military; the Vietnamese invasion of Cambodia (1978-1979) toppled the Khmer Rouge and ended its near-omnicidal misrule; and Julius Nyerere’s Tanzanian forces routed Idi Amin’s Ugandan military (1979) and then deposed the tyrant himself. However, in all three cases, the interventions were carried out by the forces of neighboring countries who were being directly affected by refugee flows and military provocations.

How does all of this reflect on Syria today? For one thing, it is not entirely certain as I write this that the Assad regime deployed chemical weapons. What would it have to gain, when the Obama administration has said for months that doing so would constitute crossing a “red line” and invite attack from the United States and others? In contrast, the rebels would have an enormous incentive to essentially frame the regime by exaggerating its crimes, perhaps by deploying chemical weapons themselves and blaming the government. I think this qualifies as “critical thinking.”

For another, why exactly are chemical weapons much worse than metal and explosives? Including them with biological and nuclear weapons in the “Weapons of Mass Destruction” pantheon makes little sense. Besides, each such intervention to support a flailing faction creates a moral hazard, encouraging armed groups to launch violent campaigns based on the expectation that they can incite U.S. or NATO intervention. It also elicits charges of hypocrisy, in which intervening powers only punish or prevent the crimes of one favored faction.

Most importantly, the sheer complication of Syria’s situation constitutes a giant blazing warning against getting involved. In fact, to speak of “Syria’s situation” today misses the point; it is in fact the situation of the Middle East and beyond. The Syrian rebels are overwhelmingly reactionary Sunnis, along with some Druze, Turkmen, and others (Syria’s Kurds and Palestinians are divided). Some rebels are allied with Al-Qaeda, and these pose a mortal threat to Syria’s Alawites, Shi’a, Christians, and anyone else who relies on the protection of the regime. That menace is compounded by their backward stance regarding women.

The rebels have received extensive support from the brutal monarchies of Saudi Arabia and Qatar, along with Jordan, Turkey, foreign fighters from various countries (particularly Iraq), and, in a limited way up to now, France, Britain, and the United States. The Assad regime has a longstanding close relationship with Russia, based partially on some small Russian military facilities in Syria. Russian advisers may be in the country as well, assisting and manning anti-ship and anti-aircraft missile batteries. Iran is another ally, supplying personnel and equipment, along with the Lebanese-based Hezbollah militant group, the Shi’a-dominated Iraqi government, and Shi’a warriors from around the region.

The whole situation is precarious. Saudi Arabia’s King Abdullah is 89 years old, and the line of succession is unclear in practice if not in theory. The Kingdom’s unhappy, marginalized Shi’a are watching their Sunni monarch harm Syrian Shi’a while facing off with Shi’a Iran across the Gulf, and coincidentally most of these people live very close to the Kingdom’s most valuable oil fields. They also live across a causeway from Bahrain, where an uprising by the Shi’a majority (with some Sunni support) against the Sunni royal family was repressed with Saudi and Qatari intervention. Tensions still simmer. Saudi Arabia and Qatar cooperated in Bahrain and cooperate in Syria, but are on opposite sides of the deep and bloody Egyptian divide, with the Saudis opposing the Muslim Brotherhood while the Qataris support it. Iran has extensive business relationships with some of the Gulf States, which, along with their small size and geographic vulnerability, will make them less likely to join the Saudis in a war with Iran. Iran has been preparing for such an eventuality for years.

Looking slightly to the west, ravaged Iraq is once again wracked with sectarian violence. The conflict is spilling into Lebanon, and Turkey’s government is not exactly in a position to claim a mandate for anything, especially war with Syria. As for the Israelis, they are in a quandary. The Netanyahu government benefits from the weakening of its antagonistic neighbors, but at the same time does not want to see the Syrian military and Hezbollah gain extensive combat experience. Israel also wants to prevent sophisticated equipment from falling into Hezbollah’s hands, and has launched strikes to try and prevent this. Meanwhile Netanyahu continues to threaten Iran (as Israel also receives threats), which could make a complicated situation even more complicated, as almost nobody in the region wants to be seen fighting on the same side as the Israelis, though it has happened before.

Lest we forget, American personnel are still stationed in Afghanistan, Kuwait, Jordan, and elsewhere. The Iranians will likely lash out if they or Syria is struck by Israel, the Gulf States, or NATO. The Iranians may not see much of a difference between their assailants, whether or not said assailants are working in concert.

It is perhaps hackneyed to refer to a situation like this as a tinderbox, a powder keg, or anything else similarly hazardous, but the comparison is still apt. Like the “Guns of August” in 1914, the current confrontation could not only envelop the region of its origin, but also spread in several directions. The United States, United Kingdom, France, Israel, and Russia are all nuclear powers, and an expansion of the conflict to Afghanistan could involve Pakistan and India. The Chinese, who oppose a strike, are meanwhile watching the situation warily.

Syria’s brutal jihadist rebels do not deserve American help, and even if they did, the situation is so dangerous that getting involved is a potentially catastrophic mistake. In 1956, President Eisenhower and the other NATO leaders could do almost nothing to aid the Hungarian rebels, and the situation was similar for Lyndon Johnson during the 1968 Prague Spring. In both cases, taking a stand would have risked a nuclear confrontation with the Soviet Union. The risk is almost as high today.