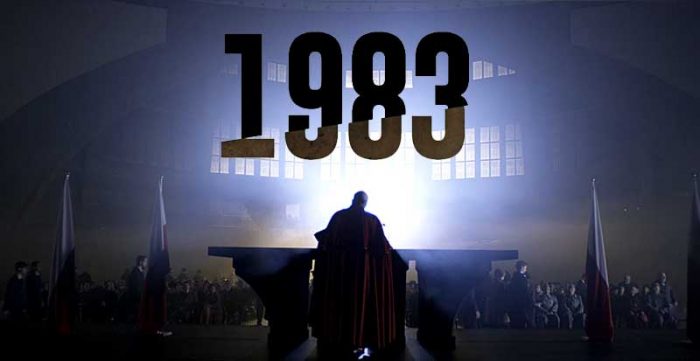 The Importance of the Latest Netflix Dystopia

1983 is an alternative history that bears disturbing resemblance to contemporary politics.
By John Feffer | December 14, 2018

Popular culture is full of alternative histories. Mackinley Kantor wrote a famous article in Look magazine in 1960 about what would have happened if the Confederacy had won the Civil War. Philip Roth’s novel The Plot Against America imagines a world where Charles Lindbergh beats FDR in the 1940 elections and ushers fascism into the United States. And The Man in the High Castle, an Amazon series based on the Philip K. Dick novel, depicts a terrifying scenario in which the Axis powers have won World War II.

These counter-histories tackle big historical events. The stakes are huge. As we read or watch these parallel universes, we shudder as we contemplate the precariousness of our current reality.

The new Netflix series 1983 inspires comparisons to these other counter-histories. But I fear that many people outside Poland might decide not to watch the series because the “what if” might seem parochial to them. It’s not just that the alternative history involves Poland rather than the United States or Russia or even Germany. It’s that even the “what if” here would be somewhat obscure for Poles themselves.

The show is called 1983, after all, not 1981. That’s the year when most people ask the big “what if” questions. What if the Soviet Union had invaded Poland that year to suppress the Solidarity trade union movement? What if Solidarity had improbably brought down the Communist government and replaced it with something more democratic nearly a decade before this actually happened in 1989?

But this new series focuses not on 1981 but on 1983, more than a year after the Polish government declared Martial Law, suppressed Solidarity, and supposedly prevented the Soviet Union from intervening. In March 1983, according to the fictitious past of the new Netflix series, a number of explosions take place in major Polish cities. The Communist government blames the incidents on terrorists and uses them to justify a further consolidation of power. It does so also to keep the Russians at arm’s length, though in reality the risk of Soviet military intervention had effectively disappeared even before the Polish government declared Martial Law in December 1981.

Thus we have a very strange counter-history. In reality, although the Polish government remained concerned about Solidarity’s activities underground and the overall sympathies of the Polish population, it would lift Martial Law in July 1983. Meanwhile, March 1983 was no special month, no critical turning point. Which means that the new Netflix series is set in a relatively small country and takes place in a not particularly pivotal year. The stakes, it would seem, are very low indeed.

But it turns out that 1983 is not so much about what happened differently but about what didn’t happen. Because of these explosions in Poland in the parallel universe of 1983, the country doesn’t go through the transformations of 1989. The explosions give the Communist Party an opportunity not just to push the opposition underground but effectively to eliminate it and continue to hold power into the 2000s. Indeed, the present day of the series is 2003, 20 years after the incidents. The Party, with the help of the secret police, the army, and the regular police, is still well-entrenched. It has constructed a widespread surveillance regime. It distributes propaganda to a population isolated from the outside world. It delivers sufficient economic success to garner popular support while relying more on nationalism than communism to maintain its legitimacy. The underground opposition that has survived is meager. A new resistance movement called the Light Brigade attracts a younger generation, but it too is small in number.

The show toggles back and forth between 1983 and 2003. In the first episode, a young man, Kajtan, passes his oral exams in the spring of 2003 on his way to becoming a lawyer. Kajtan seems to be the golden child of the Communist elite. He’s even dating the daughter of the economics minister. He is also an orphan. His parents died in the 1983 bombings. That’s when he became imprinted on the public imagination when he appeared on the front page of the Party newspaper as the boy with a lily at the funeral of his parents. In the flashbacks, we see his parents in the months before the bombings, the father participating in the underground, the mother working at the sports ministry. The two plotlines seem to run in parallel but they actually converge, the first leading up to the bombings themselves in 1983 and the second gradually exposing the real cause of the attacks.

The world outside of Poland is full of big events, like the deployment of U.S. troops in the Middle East in preparation for what seems like another war in Iraq under orders from an administration headed by Al Gore. But these world-historical events are marginal. The series focuses claustrophobically on Poland as if we, the viewers, are as isolated as the characters in the show. And that’s what makes 1983 so interesting. The show is concerned not with abstract what-ifs. It is instead suffused with the specifics of Polish culture and history.

Take, for instance, the depiction of the opposition movement. 1983 depicts clandestine meetings and heated discussions over the use of violence, just like the conditions during Martial Law. But there is one scene in particular that stands out. One of Kajtan’s old friends brings him to a performance in an underground passage in Warsaw’s Old Town. It is a single actor reciting from the poet Adam Mickiewicz’s masterpiece Dziady. Many Poles will instantly recognize the reference to the banned performance of Dziady that precipitated the protests of 1968 that began in Warsaw.

Then there’s the role of the Vietnamese community. When I lived in Warsaw in 1989, I remember the small community of Vietnamese who’d come over as students or guest workers. They’d set up a few restaurants where you could get reasonably authentic noodle soup. There was one community in particular in Praga, across the river, and I even remember articles in the paper about Vietnamese gangs. A new wave of Vietnamese came to Poland in the 1990s as small-scale entrepreneurs, and they are now Poland’s largest non-European immigrant population.

But 1983 imagines a much larger role for the Vietnamese. The Party has brought in large numbers of Vietnamese guest workers to handle sensitive tasks. There are Vietnamese students and Vietnamese oppositionists. The community seems to have monopolized the fast-food industry. And Vietnamese are involved in the underground economy of drugs, prostitution, and gun-running. Polish cops even have to pick up some Vietnamese words to get by.

It’s the many details of 1983 that give it so much authenticity even though it’s fake history. The series showcases the Stalinist architecture that’s still scattered around Warsaw, including the famous wedding cake Palace of Culture and Science in the very center of the city. But there’s also the Old Town and some of the new glass and steel structures as well. At one point, Kajtan is sitting on a bench eating a zapiekanka, the cheap French-bread pizza that was ubiquitous in 1989 but harder to find by the early 2000s when better options were available. In the alternative reality of 1983, the zapiekanka survives just like the Party.

But perhaps the most authentic part of 1983 is its preoccupation with those twin phenomena of modern Polish political life: manipulation and collaboration. It was a constant fear among those in the opposition that the authorities were constantly manipulating people and events. Perhaps they were provoking the opposition so that it would respond with violence. The other great fear was of collaborators. Poland’s secret police – Sluzba Biezpieczenstwo (the security service known as the SB) – was not as powerful or as influential as the East German Stasi. But there were still 20,000-plus operatives who were managing, at their height, 84,000 informants. Many leading intellectuals and dissidents have been accused at one point or another of being informants, including former Solidarity leader Lech Walesa.

There were no terrorist attacks in Poland in 1983. But a few months earlier in September 1982, a strange incident took place in Switzerland. A group that called itself the “Polish Revolutionary Home Army” seized control of the Polish embassy in the city of Bern and took several diplomats as hostages. The militants called for an end to Martial Law, more than a million dollars, and safe passage out of Switzerland. After 72 hours, Swiss police stormed the embassy, freed the hostages, and captured the gunmen.

But that wasn’t the end of the story. The head of the hostage-takers was Florian Kruszyk, who turned out to be a convicted Polish spy. In 1968, the Austrian authorities arrested him after determining that he was a member of the Polish secret service. So, was the whole incident cooked up by the Polish authorities to discredit the opposition and justify a crackdown on Solidarity underground? Possibly. 1983 takes this scenario and runs with it.

Jennifer Wilson criticizes the series in The New Republic for depicting an imaginary Polish dystopia instead of challenging Poland’s current dystopian reality. But that’s not fair. For many Poles and those who listen carefully, there’s a substantial connection between the imagined future of 1983 and the current reality of Poland under the Law and Justice Party or PiS. This party, of course, is right-wing, not Communist. But it espouses the kind of nationalism that Communist Party officials spout in 1983. And PiS favors the same kind of semi-isolationist politics.

Agnieszka Holland, the famous Polish director who was involved in the making of 1983, encourages such comparisons. “The Poland in the series is isolated – much more isolated than in the communist era,” she told The Guardian. “Outside influences are very rare, so the country develops its own version of modernity. Prosperity is limited, but people don’t know how it is outside so they feel safe and happy. They are manipulated by this propaganda, but they feel it is good for them. Of course, this is very close to what PiS would love to have in Poland.”

It’s not just Poland, she goes on. The support for right-wing populists and authoritarians in Russia, the United States, Turkey, the Philippines, India, and Brazil suggests that many people around the world have little interest in freedom.

For this reason, 1983’s exploration of the freedom vs. security dilemma goes beyond the Polish context of the series. It’s a show that’s well suited to the times we live in. It’s also a genuinely riveting show, with sharp dialogue, great acting, and mesmerizing atmospherics. I hope that it cultivates an audience hitherto ignorant of Poland and its history.

John Feffer is the director of Foreign Policy In Focus. This essay first appeared in his podcast, The Energy of Delusion.