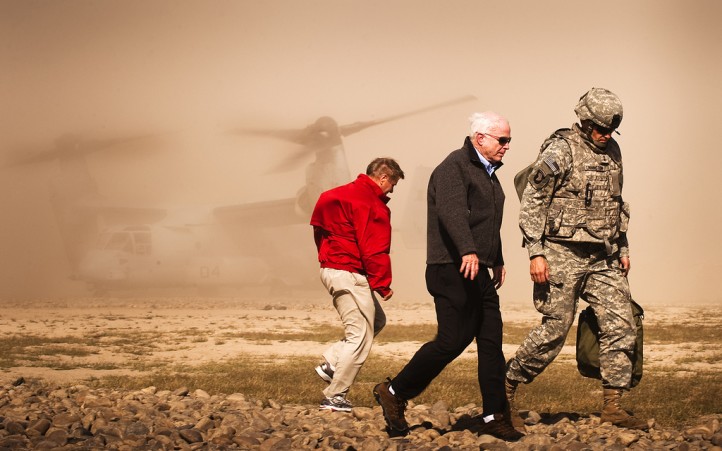 In the last days of his life, an old video of John McCain surfaced on the internet.

It’s 2008. He’s running for president and fielding questions from voters in Minnesota. A middle-aged woman takes the microphone.

“I can’t trust Obama,” she complains of McCain’s Democratic opponent. “He’s an Arab.”

The Arizona Republican shakes his head. Obama is “a decent family man and citizen that I just happen to have disagreements with,” McCain retorts. And adds: “He’s not [an Arab].”

Standing up for a rival was classic McCain, many believed, and his handling of the incident got praise at the time. No wonder it’s circulating again now, after a later presidential candidate made that woman’s slanderous race-baiting look tame.

Still, too few people asked: Do real Arabs not make “decent family men” or citizens? Can one not have principled “disagreements” with them?

More concretely: McCain was then campaigning on a pledge to expand the Iraq war, which he’d championed from the beginning. That war had killed perhaps a million Arabs. It would lead later to a devastating occupation by ISIS, and yet more U.S. military intervention.

Throwing an entire ethnic group under the bus may not have been McCain’s intent, though he’d had his brushes with bigotry before. For years he referred to East Asians by a Vietnam-era slur, opposed making MLK Day a holiday, and reportedly had a habit of calling women, even his wife, the c-word.

But it’s not really about McCain or what’s in his heart. It’s more about how the D.C.-based media reported him, and how admiring Americans interpreted his behavior.

Sporadically, the late Republican senator did take some principled stands. As a POW who suffered torture himself, he took on multiple Republican presidents to keep the U.S. from resuming it (though he steadfastly supported the wars in which that torture took place). And last year he cast a surprise, decisive vote against the GOP’s effort to kill Obamacare (though he’d voted against Obamacare earlier).

Mostly, though, McCain was a reliable vote for his party’s worst ideas, and contributed many of his own (like putting Sarah Palin a heartbeat from the presidency). And despite his well-known feud with President Trump, he voted in support of the president’s agenda 83 percent of the time.

McCain supported the $2 trillion corporate tax giveaway that could tear our safety net to shreds. His unrelenting passion for military conflict was a thing of caricature (“bomb, bomb, bomb, bomb, bomb Iran,” he famously sang). And his support for empire-crumbling military budgets was so renowned that his colleagues named this year’s $717 billion atrocity after him.

Trump never thanked McCain when he signed it, but sign it he did. Some feud!

The point isn’t that McCain’s odes to honor or civility were somehow dishonest. To him, I’m sure they were genuine.

But in emphasizing McCain’s personal style over his actual politics, his eulogizers imply there’s some “honorable” way to implement an agenda like Trump’s (or 83 percent of it, anyway), as long as you don’t talk like Trump himself.

Personally, I disagree. Whether they realize it or not, I think the “straight talk” people praise McCain for is actually what most of them can’t stand about politicians: They say noble words but cast ignoble votes.

I don’t mean to suggest that Trump’s personal style is a welcome change from McCain’s. It’s not. But politics can’t just be a theater for elites, where standing up for one rival outweighs supporting a war that killed a million people.

Actions matter more than words, and that’s the straightest talk I can think of.