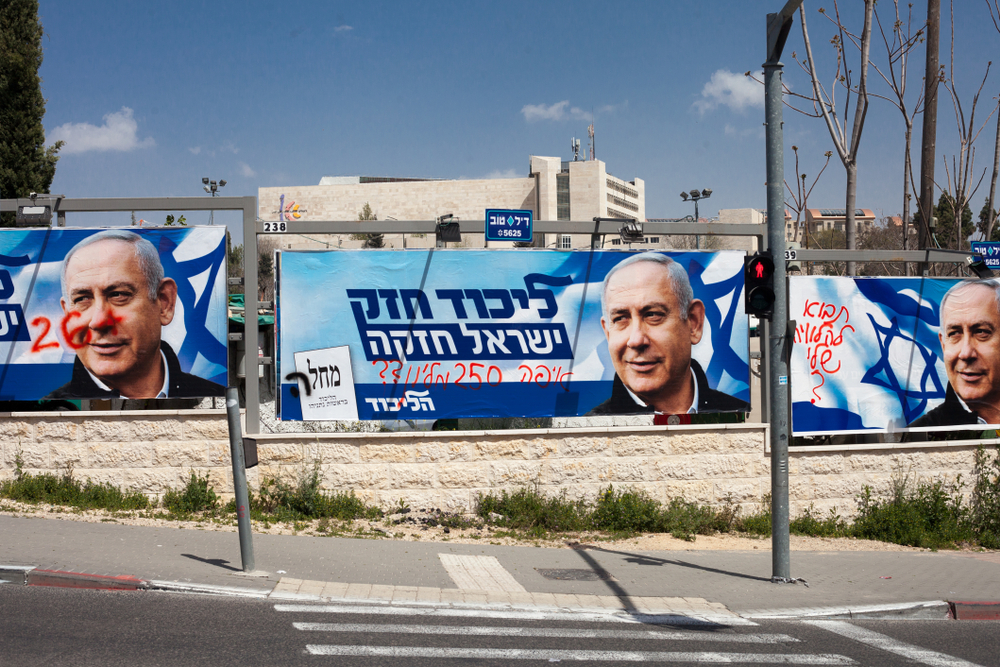 Israel’s two leading parties spent the campaign jostling over who can carry out war crimes against Palestinians more aggressively.
By Khulood Badawi | April 11, 2019

Israeli elections have come and gone, delivering Benjamin Netanyahu a fifth term that soon will make him Israel’s longest serving prime minister. The toxic rhetoric that defined the weeks-long campaign, with candidates seeking to outdo each other in demeaning Palestinians and dismissing rights, will most likely endure.

It starts with Netanyahu’s Likud Party. Netanyahu last month said on Instagram, “Israel is not a state of all its citizens. According to the Nation-State Law that we passed, Israel is the nation-state of the Jewish People — and them alone.” His comments came in response to an issue that the Israeli actress Rotem Sela raised on social media: “When the hell will someone in this government broadcast to the public that Israel is a country for all its citizens? And every person was born equal. Arabs, too, God help us, are human beings.”

Leading chants of “Bibi or Tibi” (a reference to a Palestinian-Israeli Knesset member Ahmed Tibi), Netanyahu repeatedly claimed that his rivals want to join a coalition with parties representing Palestinian citizens of Israel (as though this were a disqualifying prospect).

Meanwhile, in February, he oversaw the entry into his presumptive coalition of the Jewish Power party, whose platform commits to “removing Israel’s enemies,” a euphemism for expelling Palestinians, “from our land” and to “return” them “to their countries of origin,” a naked attempt to erase Palestinians’ connection to their land. The coalition, the Union of Right Wing Parties, won several seats in the election and will likely join Netanyahu’s government.

Several days before the election, Netanyahu said he would annex more of the West Bank, where more than 2.5 million Palestinians live under a military regime that treats them separately from and unequally to Jewish Israelis living beside them in illegal settlements and systematically violates their rights.

On Election Day, members of Netanyahu’s Likud Party sent over 1,000 election-day observers, by their own admission, with cameras to polling sites in predominantly Palestinian towns inside Israel. This purported attempt to prevent voter fraud actually seemed designed to intimidate voters, and the Central Elections Committee determined that it violated Israeli elections law.

Just before polls closed, Netanyahu cited on social media reports of increased turnout of Palestinians voters to goad supporters to head to the polls. This bigotry isn’t new for Netanyahu; on election day 2015, he rallied his supporters by warning on Facebook, “Arab voters are coming out in droves to the polls.”

Meanwhile, Netanyahu’s chief rivals, the Blue and White Party of former Israeli army Chief of Staff Benny Gantz and former Finance Minister Yair Lapid, which will hold more than a quarter of  the seats in the new Knesset, were hardly better.

Gantz ran a series of campaign ads that appeared to justify vastly disproportionate Israeli military attacks in Gaza that he directed when he was chief of staff.  Some of the ads were taken down, including one that said that that “parts of Gaza were sent back to the Stone Age,” while drone footage showed devastated neighborhoods in Gaza during the 2014 war. In another, he brags about killing 1,364 “terrorists” during the 2014 Gaza War. In fact, according to the United Nations, more than 1,400 of the nearly 2,300 people killed in that conflict were civilians.

Moshe Ya’alon, another former Israeli army chief who is third on the Blue and White list, posted a video on his Facebook and Twitter accounts of Netanyahu saying that residents of Khan al-Ahmar, an indigenous Palestinian Bedouin community registered as refugees with the United Nations, in the occupied West Bank will be “evacuated in a short time.” The demolition will provide more land to nearby settlements. Then Ya’alon responds, “Netanyahu, aren’t you ashamed? Khan al-Ahmar is still standing, and you are calling us the ‘weak left’?”

Netanyahu, in turn, promised to carry out the demolition “at the soonest opportunity.” In effect, Israel’s two leading vote getters, who collectively hold a majority of Knesset seats, jostled over who can carry out more quickly the possible war crime of forcibly transferring a community within an occupied territory.

This kind of rhetoric isn’t just an election-season one-upmanship, but rather reflected in decades of entrenched discrimination and systematic rights abuses of Palestinians, citizens and non-alike.

These include policies, for example, that allow Jewish Israelis to easily obtain building permits in Israel, East Jerusalem, and the 60 percent of the West Bank that the Israeli army fully controls, but not Palestinians.

Or policies that forbid Israeli citizens or residents from bringing their Palestinian spouses from the West Bank and Gaza to live with them in Israel, outside of narrow exceptions (a restriction that does not apply to spouses from virtually anywhere else in the world). Policies that deprive 5 million Palestinians in the West Bank and Gaza of their most basic rights and treat them separately and unequally.

However negotiations to form a government turn out, racial discrimination and disdain for rights will most likely continue to shape Israeli policy.

Khulood Badawi is an Israel-based consultant at Human Rights Watch.