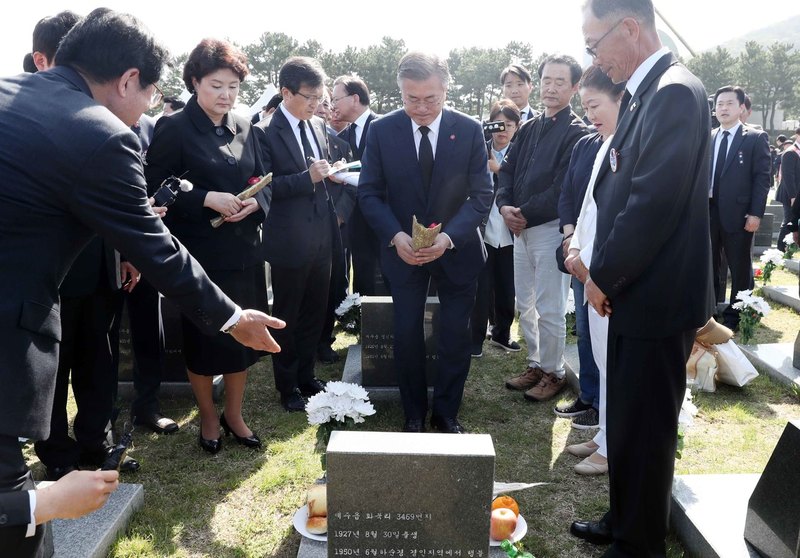 South Korean president Moon Jae-in at a memorial for the victims of the Jeju massacre. (Photo: Blue House Photo Pool)

The Korean Massacre the U.S. Needs to Apologize For

To help make peace in Korea, the U.S. should follow South Korea's lead and apologize for its role in the devastating Jeju massacre.
By Geoffrey Fattig | May 14, 2018

Singapore has been chosen to host the unlikely summit between U.S. president Donald Trump and North Korean leader Kim Jong-un in early June. The choice for the summit venue went against Trump’s preference for the meeting to take place at the Peace House in Panmunjeom, where the world had been captivated just weeks before by the amicable scenes of Kim walking hand-in-hand across the Military Demarcation line with South Korean President Moon Jae-in.

Given that Panmunejom embodies of the division of the Korean Peninsula, it is regrettable that U.S. and North Korean negotiators opted for the southeast Asian city-state instead. This is because the root of the nuclear issue stems largely from the decision by American military officers to divide the Peninsula at the 38th Parallel in the aftermath of World War II. The arbitrary divide led to a devastating war, decades of hostility between a previously unified people, and heartbreak for families forever separated from loved ones.

One of the most tragic results of the division was the 1948 Jeju Uprising, which began on April 3 of that year and resulted in the deaths of over 10,000 of the island’s inhabitants — many of whom were civilians, including an estimated 770 children under the age of five.

The primary cause of the uprising was the 1948 constitutional assembly election, which was organized under the auspices of the United Nations with the aim of establishing a national government for Korea. Due to fears that it would exacerbate the existing division, the election was boycotted by the North Korean side and leading South Korean politicians, including Kim Gu, who had served as president of the Korean Provisional Government during the Japanese colonial period.

The Workers’ Party of South Korea (WPSK), a communist group which had been banned by the U.S. military government in Seoul, also opposed the election and had a strong base of support on Jeju. Tensions had been running high on the island after police fired on a rally to commemorate the March 1 Independence Movement, killing five civilians and a six-year-old child. In the months prior to the uprising, roughly 2,500 of the island’s residents were jailed, with many subjected to torture. On April 3, one month prior to the national election, the WPSK launched an armed revolt targeting police stations across the island.

Backed by the U.S., Rhee authorized a scorched-earth campaign in Jeju during which villages were burned and thousands of suspected guerrillas summarily executed without trial. Hundreds more were rounded up and sent to prisons across the country following dubious convictions of rebellion. Rhee also deployed a paramilitary force, the Northwest Youth League, which consisted on anti-communists who had fled North Korea and were responsible for some of the worst atrocities.

Conscious of this past, South Korean President Moon Jae-in recently visited Jeju on the 70th anniversary of the uprising and delivered a powerful speech at the island’s April 3 Peace Park, which houses grave markers for thousands of victims whose bodies were never recovered. In his address, Moon apologized “for the pain stemming from state violence” and resolved to provide compensation for the victims’ family members and restore the reputations of those wrongly convicted by military courts. He also spoke of needing to “avoid being trapped in a worn-out ideological framework.”

Of course, the Korean Peninsula is still trapped in an ideological framework, the seeds of which were sown in part due to the tragic events on Jeju. One clear manifestation of this conflict is the standoff over the North Korean nuclear program and the long-standing hostility between that country and the United States. At the heart of this animosity is the blame which the North Korean regime assigns the American government for its role in dividing the Peninsula in 1945.

When the leaders of these two sides sit down in Singapore next month, Trump and Kim will be burdened not just with the complex issue of North Korean denuclearization, but also with historical grievances that go back decades. Establishing a sense of trust and goodwill should thus be the first issue on the agenda.

Apologies can go a long way toward fostering these qualities, and perhaps nowhere does this hold truer than in Korea. After all, this is a country where hundreds still gather every Wednesday outside of the Japanese embassy to demand an apology over the issue of Korean comfort women forced to serve in brothels for the Japanese military during World War II.

By following the lead of President Moon and offering an apology for the United States’ role in facilitating the bloodshed on Jeju and the worn-out ideological framework on the Korean Peninsula, Trump would be signaling his acknowledgement of a problem that goes far beyond the nuclear issue. Such a gesture would be warmly welcomed by Koreans on both sides of the DMZ.

Most importantly, it would provide a highly effective means of putting his summit with Kim Jong-un on the path to success.

Geoffrey Fattig is an independent research analyst based in Seoul. He has a master’s degree in International Affairs from UC San Diego and previously worked as a speechwriter for the U.S. Department of State.