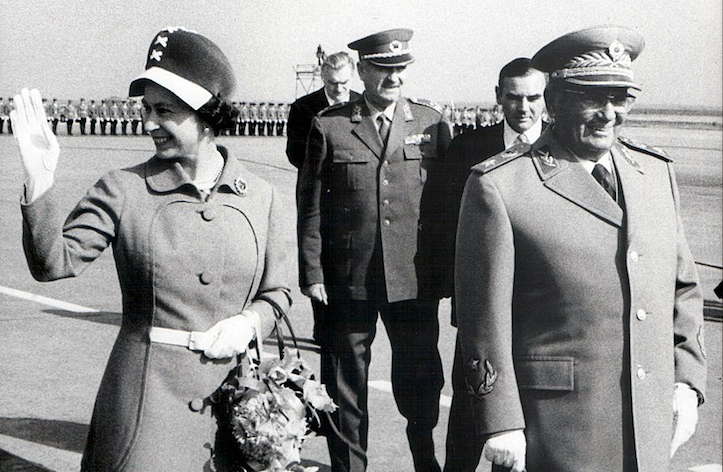 The Marshal and the Queen: A Tale of Two Funerals

Religious devotion to the ruler of any country is a mistake.
By Mira Oklobdzija | October 20, 2022

Half a century ago, in 1972, one head of state, Marshal Josip Broz Tito and one queen, Elizabeth II, met in Yugoslavia.  My aunt, their official translator, claimed that they genuinely appreciated each other’s company. At the time, as well as later, many citizens of their countries appreciated them well enough except the ones who criticized Tito’s “strong-hand” rule and anti-monarchists in Great Britain. What also connects these charismatic figures is that their state funerals have been the biggest ever in Europe. Their widely covered spectacles were witnessed by the public around the globe.

The similarities are striking. Upon the somber announcements of their deaths, hundreds of thousands of people reacted in shock, which is strange since both were quite old). Citizens didn’t shy from openly demonstrating their grief, hugging each other, and putting their tears on free display (in a fashion more suited to the bereaved family members). Flags were lowered, and rifles and canons were fired, according to old habits. Yugoslav and British residential quarters were deserted because all were glued to their TVs or had gathered in public spaces to watch the farewell parades together. Needless to say, shops were closed, and all public events were cancelled. The reports on the front pages of world publications chose to list only the positive qualities of the deceased for critiques were perceived as tasteless. Many sad-faced dignitaries came in person to the funerals to pay their last respects.

And, yes, both funerals can be described as the end of one or another era. But was it two good or two bad eras that came to a close? Should we be saddened, or should we rejoice?

Both eras started approximately at the same time, during World War II. About the Queen, as about Tito, much has been written, so thumbnail sketches should suffice.

Tito was a man of humble origins, a trained metalworker raised through the ranks of the Communist Party. He successfully led the partisan resistance against the Nazis and the Italian Fascists, became the father of the Socialist Federal Republic of Yugoslavia and its president for life. He was the man who said “no” to Stalin, which established a path out of the Cold War blocs and later played a crucial role in the Non-Aligned Movement. In his spare time, he liked to hunt (one of the passions he shared with the Queen, besides love of horses, dogs, gardens, cars, and luxurious residences). His cigars came from Cuba. In his vast, eclectic collection are also stones from the moon, a gift from Richard Nixon, delivered to Tito in 1969 by Neil Armstrong. Many a movie star dined at his table, and he certainly enjoyed the company of interesting women. Even opponents of his regime were hard-pressed to deny his charms. All in all, he was not your typical dictator.

Tito’s funeral in 1980 was attended by a few hundred dignitaries coming from 127 countries, 40 political parties, and six movements, as well as members of the UN and the European Parliament. This colorful group was led by kings and princes, prime ministers, presidents, and ministers of foreign affairs. To name just a few: Prince Philip, King Hussein, Leonid Brezhnev, Helmut Schmidt, Nicolae Ceausescu, Robert Mugabe, Indira Gandhi, and Saddam Hussein. The funeral featured some odd interactions, as when Yasser Arafat cordially touched Margaret Thatcher’s shoulder after which she automatically shook his hand (and allegedly never forgave herself for the gesture).

The Queen’s background couldn’t be more different than the Marshal’s. Born to the house of Windsor, Princess Elizabeth led her life as befit a very rich member of royalty. Home schooling, a protected life, and then marriage to a suitable man was followed by strict training for her future role as a monarch. After her coronation in 1952, the royal couple traveled extensively through the Commonwealth and beyond. Her children grew up encountering a few scandals, no bigger than those of ordinary mortals, but more widely covered in the fashion of reality shows. In the last decades of her life, the Queen, rather clumsily and unconvincingly, tried to present a more modern image of the monarchy. One of the world’s richest women, she started finally to pay taxes on her private income in 1992. All in all, she was your typical lady.

Her funeral in September 2022 was also attended by hundreds of dignitaries from 167 countries, again kings and queens, presidents, prime ministers, and some celebrities. Present were Joe Biden, Emmanuel Macron, Jair Bolsonaro, Ursula van der Leyen, and many others. In what was once Yugoslavia, several comparisons appeared in the press claiming that, considering the number of UN member states at the time of the funerals, Tito was more prominent. At his farewell appeared representatives of 88.8 percent of the member states while at Elizabeth’s there was only 86.5 percent. People from the Balkan region like to be first, even in counting attendees at the funerals of a leader many actively criticized (especially after his demise) and a queen they didn’t much care about.

The era of the Marshal lasted for almost 40 years. It was dynamic, challenging, and full of changes, experiments, and clashes of different worldviews. At the beginning, Yugoslavia was rebuilt mostly by the enthusiasm of its citizens. The self-management of enterprises, enthusiastically greeted by anarchists worldwide, distinguished the Yugoslav economy from the Soviet type of state building. “Brotherhood and Unity” was the state’s preferred slogan, encouraging solidarity between different peoples and, for a long time, managing to keep nationalists at a safe distance. What older generations remember with a sense of loss is free education and medical services (for all) and free traveling abroad (for most). Tito’s name was known even by the foreigners who couldn’t locate Yugoslavia on the map.

But, of course, not everybody was content. Dissidents and a democratic opposition wanted more freedom of expression, a multiparty system, and less of Tito’s personality cult. Nationalists wanted more autonomy for their republics. The government’s legitimacy was undermined by stories of atrocities against defeated soldiers who aligned with the wrong side in World War II or those often incorrectly labelled Stalinists who were incarcerated at the camp Goli Otok). As Tito grew older, new players on the political scene attempted to redraw the interior borders of the country, awakening old myths in their efforts to gain power.

And then the father died. The power games of the nationalist leaders in the different Yugoslav republics led directly to war, and the country died as well. From its ashes new countries arose, each built around national identity. If nothing else, the new national leaders agree that Yugoslavia was an “artificial creation,” ignoring the obvious fact that all modern states are artificial. So, the end of Tito’s era was marked by the creation of new borders and negative feelings between yesterday’s brothers (and their offspring). Those who refuse to be reconciled with this reality have become a new minority.

Queen Elizabeth’s era, which lasted 70 years, was traditional and conservative, full of ceremonies and repetitions of the same old rituals. What started before her time continued, including countless atrocities in the places that the Crown still considers its own. In Kenya, for example, British colonial authorities suppressed a rebellion against the colonial regime known as the Mau Mau, which, according to The New York Times, “led to the establishment of a vast system of detention camps and the torture, rape, castration and killing of tens of thousands of people.” The British government eventually paid £20 million in a court judgement to Kenyan survivors. The Crown’s involvement in slavery, robbery, genocide, racism, and apartheid in South Africa and the humiliation of the people whose lands happened to be in its zone of conquest, like India, are undeniable.

There is a clear connection between slavery, capitalism, and the monarchy. But, as Horace Campbell has correctly stressed, “Britain had been able to represent colonialism and imperial building as emanating from a ‘high moral purpose’ where Britain carried out progressive constitutional freedoms and the rule of law, along with free trade and free labor, among the less fortunate barbarians.” Nobody asked the barbarians if they wanted to be saved in that way or if they wanted to contribute their land and resources to increase the riches of the house of Windsor. . And this fact can hardly be called a “high moral purpose.”

Did Elizabeth know about or question these colonial crimes? Even if she cared to do so, could she have done anything about them? The future of monarchy is closely connected with an honest answer to these and similar questions. The Guardian stated in its editorial, four days after her death:

The death of the Queen feels to some like the loss not of bearings but of the nation’s compass itself. Monarchy is a form of religion. In a secular age, it is easier to disavow God than the monarchy… Who is the head of state does matter. Birth right is not the right way to choose one. Parliament is the place to decide whether Britain needs a slimmed down monarchy – or one at all… Modern Britain has little need for trappings and privileges that belong to another age.

What followed the end of the Marshal’s era is known; the outcome of the Queen’s has yet to be seen. Elizabeth’s subjects, after Brexit and the COVID pandemic, are uncertain about their future. As war and power games devastate Ukraine, life is getting more complicated by the day. The real or false sense of security and continuity that the Queen provided for many is gone, and times are hard and getting harder. In a similar way, though separated by time and space, the grief of the masses over Tito’s death was closely connected with nostalgia and a fear of the future. Religious devotion to the ruler of any country, dead or alive, which is presented as noble patriotism, will always lead to the tears and confusion of their subjects, who refuse to become adults, face the facts of past and present, and act accordingly.