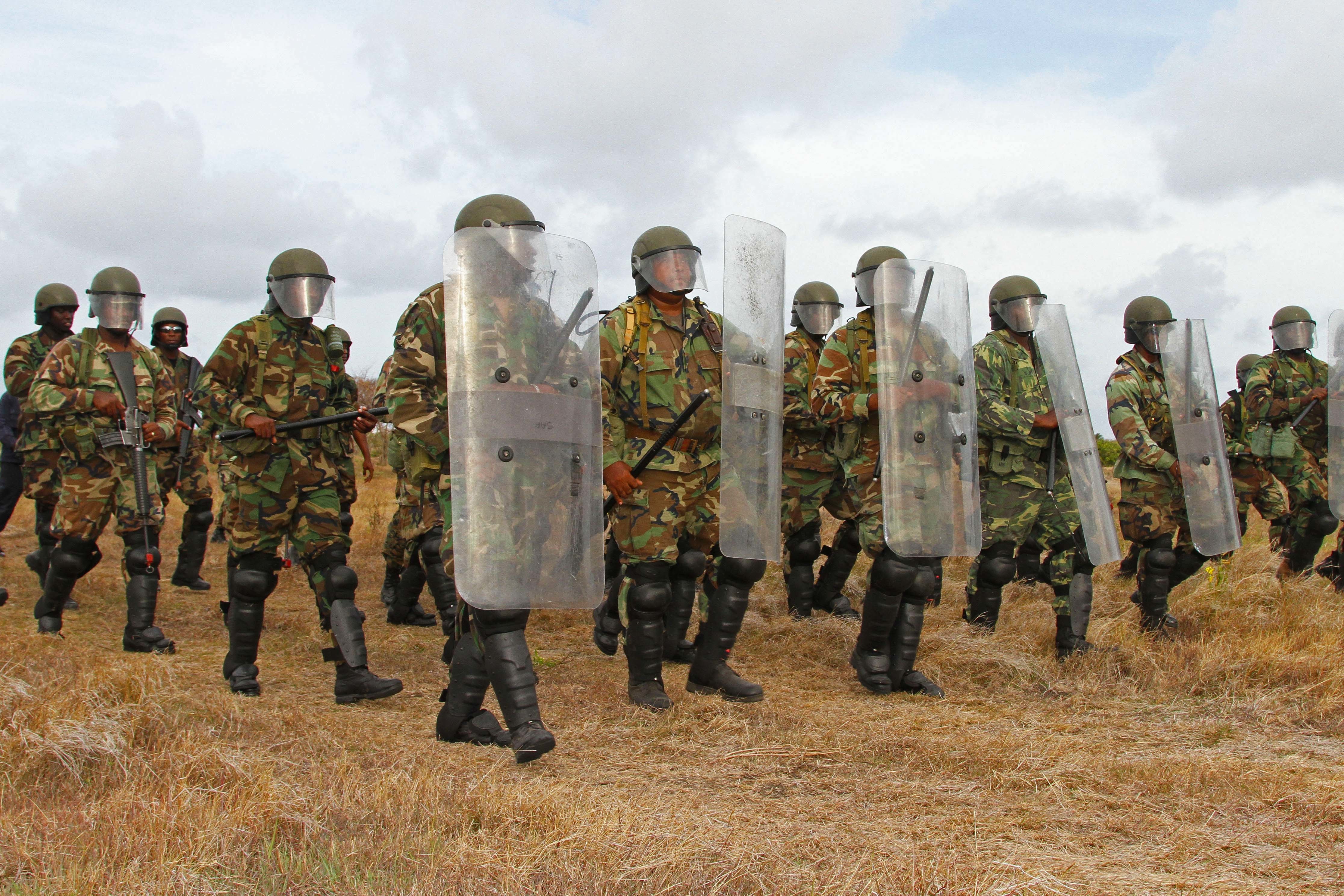 The Militarization of U.S. Policy on Latin America Is Deepening Under Trump

With development assistance slashed, the face of U.S. diplomacy in the region will more often be wearing a uniform.
By Jake Johnston | June 15, 2017

In a high-level meeting Friday, the presidents of Honduras, Guatemala and El Salvador will discuss the region’s security with American and Mexican officials.

Innocuous enough, you may think. But part of the meeting will be held on a U.S. military base in Miami, Florida — the headquarters of the U.S. Southern Command, the Pentagon’s regional subsidiary that oversees American military operations throughout Central and South America as well as the Caribbean. Under President Donald Trump, the militarization of U.S. foreign policy is about to stretch more deeply into Central America.

Central America policy-making, hardly an open book to begin with, is set to become more secretive.  With the Conference on Prosperity and Security in Central America just days away, there is no official agenda of speakers or publicly listed events and no involvement of civil society organizations — even press access is extremely limited. What we do know is U.S. Secretary of State Rex Tillerson will be there, as will Vice President Mike Pence — and of course, General John F. Kelly, the director of Homeland Security and the previous head of SOUTHCOM.

These high-level government officials will be joined by a coterie of elite Central American businessmen, invited to the conference by its hosts, the U.S. and Mexico. Trump’s budget envisions a massive cut in U.S. economic assistance to Central America, so officials will apparently be asking the country’s most rapacious and corrupt economic actors to fill the void.

“We must secure the nation. We must protect our people,” Secretary of State Tillerson told his staff last month in a discussion around Washington’s new “America First” foreign policy. “And we can only do that with economic prosperity. So it’s foreign policy projected with a strong ability to enforce the protection of our freedoms with a strong military.” By linking economic success with military operations, Tillerson telegraphed which way the foreign aid dollars will be blowing.

While much has been made of the reduction in the budgets of the State Department and USAID, don’t expect the U.S. to simply retreat. Rather, expect the U.S. military to deepen its involvement in the region. There may be no new official policy announcements, but the shift appears inevitable.

The turf battle between the State Department and the Pentagon over control of foreign assistance — and more specifically “security cooperation” — goes back to the Obama administration. Throughout 2016, the diplomats and the generals fought over control of the billions of dollars of U.S. security assistance allocated each and every year. Surprising few, the Pentagon came out on top and with Trump’s election has been bolstered further.

There are currently more than 80 unique authorizations that allow the Pentagon — with minimal consultation with the State Department — to deliver security assistance to foreign nations’ military, police, and paramilitary forces. With development assistance slashed, the face of U.S. diplomacy in the region will more often be wearing a uniform.

In 2016, the Pentagon distributed nearly $60 million in counter-drug assistance to Central America. Compared to the at least marginally transparent State Department budget, the labyrinthine nature of the Pentagon budget makes it next to impossible to determine precisely how much is spent in Central America — let alone what it may look like next year. But with Secretary Kelly, the former SOUTHCOM commander, in charge, it appears that an increased Pentagon focus on Latin America is likely.

The State Department has been marginalized under president Trump, and many top posts remain vacant. With the Pentagon empowered, and with top generals populating Trump’s inner-circle, it is likely the military will be leading U.S. policy in Central America. This will be on full display at SOUTHCOM’s headquarters outside Miami.

With increasing security assistance coming from the opaque Pentagon budget, congressional and public oversight of U.S. security programs becomes next to impossible. Ahead of the conference, hundreds of Central American and international organizations wrote an open letter to express their concern over the lack of transparency and consultation associated with this apparently increasing militarization. Holding the meeting at SOUTHCOM will “send a dangerous signal” to the hemisphere, many dozens of organizations warned Secretary Tillerson in a separate letter.

Viewing development through a security prism will likely mean less focus on working with the grassroots, on community-led development, or focusing on human rights. The security forces of all three Northern Triangle countries have been implicated in corruption and human rights violations, but unlike State Department funding that is conditioned — even if officials routinely certify state compliance with said conditions ― the Pentagon faces far fewer restrictions.

In 2016, the State Department ― at Congress’ request ― withheld $5.1 million in Foreign Military Financing until there had been a certification that Colombia was respecting human rights. But whatever leverage State may have had was immediately undercut. The same year, the Pentagon gave their Colombian counterparts 15 times more assistance than State could have withheld, with no conditions. (State ended up certifying compliance.)

With fewer resources channeled through traditional means, within U.S. embassies in the region it will be the intelligence liaisons, defense attaches, military group colonels, DEA agents, and other security officials that are empowered to lead U.S. foreign policy. They will be the ones holding and administering the carrots.

In turn, the militarization of U.S. foreign policy can be expected to further shift the balance of political power in Central America towards those nation’s militaries. Civilian governments are weak and fragile and, as the 2009 coup in Honduras showed, still threatened by economic and military elite.

This will likely only exacerbate the root causes of increased violence, devastation and migration that has plagued a region where what is needed are stronger civilian governments, not ever more powerful militaries.

Nor is the presence of Mexico necessarily helpful. The U.S. has enlisted Mexico to act on its behalf, clamping down on migrants coming from the southern border with Guatemala to block them well before they reach the Rio Grande. At a previous security conference in April, the Guatemalan Defense Minister announced that SOUTHCOM would begin joint operations with Mexican and Guatemalan forces on its northern border in the coming months.

The Colombian government will also be present. As with Mexico, the Pentagon is increasingly relying on Colombian military forces to train allied military and police forces throughout the region. In effect, the U.S. is outsourcing its security cooperation to Colombia and Mexico, two countries whose militaries have been implicated in more human rights abuses than any other country’s in the hemisphere.

The militarization of U.S. policy in Central America is more than just a dangerous signal. It is, as we’ve seen with the killing of Berta Caceres in Honduras, a real threat to environmental activists, civil society groups, peasant organizations, and others fighting for a more just and humane development model in the region.

As has been the case in Central America for decades, the economic and security interests the respective militaries will be protecting are not those of the poor and vulnerable, but rather those of the elites. On Wednesday, a who’s who of Central American businessmen was feted by the U.S. Chamber of Commerce and the Inter-American Development Bank; on Thursday, top officials paid lip service to “development” and announced new private sector investments. Next, behind the gates of a U.S. military barracks, political and military leaders were all set to strategize on a plan to protect those investments.

It may be good for a few big corporations’ bottom lines, for the Pentagon’s relevance in the region, and for local security forces and their political patrons, but don’t expect this militarized approach to development to solve the ongoing crises in Central America.

Jake Johnston is a Research Associate at the Center for Economic and Policy Research (www.cepr.net) in Washington, DC.