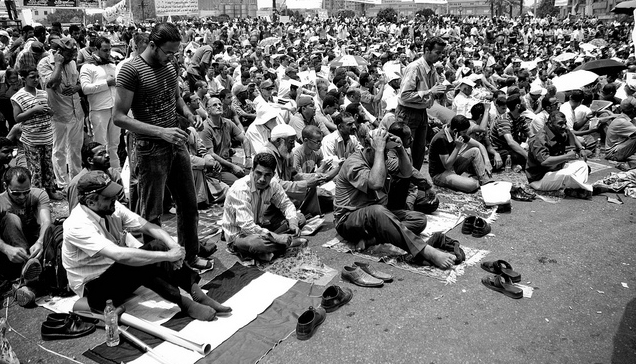 The New Rules of the Game in Egypt

A look at Egypt's constitutional declaration suggests that the road out of military dictatorship is fraught with peril.
By Sarah Gold | August 16, 2013

Although some openly state that they would prefer a military dictatorship to an elected Brotherhood government, most anti-Brotherhood apologists have held out hope that the military may yet guide the country back to democracy. In light of recent events—as well as historical precedent—this might be wishful thinking.

Still, shortly after the coup, military-appointed Interim President Adly Mansour released a 33-article constitutional declaration ostensibly establishing basic rights and providing a roadmap back to civilian rule. As expected, it was a mixed bag. But it’s worth parsing here as a baseline for what might—or might not—be possible in a democratic Egypt.

Right from the start, the declaration states that citizens are equal before the law. It promises that the state will guarantee equal opportunity and protection from discrimination based on “sex, origin, gender, language, religion, or belief.” It vows no search, detainment, or arrest without a warrant; the protection of private property; and freedom of religious belief and practice.

The private lives of citizens too, are ostensibly protected by law: “Mail correspondences, cables, telephone calls and other means of communication,” the document promises, “are private, and their confidentiality is guaranteed, and may not be confiscated, viewed or monitored except by virtue of a prior judicial warrant and for a definite period of time and in accordance with the provisions of the law.” In light of the latest NSA scandal, that is certainly more than we can say for the United States.

Article 7 guarantees freedom of speech, but “within the limits of the law,” a problematic modifier that will surely reflect the interests of those in power. Freedom of the press and a prohibition on censorship are also guaranteed, except “in the case of national emergency or time of war.” This modification allows the already powerful military to dictate public opinion whenever it deems it necessary to national security—and as the military is free from oversight, this can occur at any point the military feels that its interests are being threatened. (Egypt is right now in an official “state of emergency,” and was for two whole decades under former dictator Hosni Mubarak—many of whose cronies are now running the country again.)

Article 9 declares that there will be no forced labor, except if the state imposes it by law. Little needs to be said about why this provision is dangerous.

Article 10 protects the people’s right to assemble peacefully with no need for prior notice, and prohibits security forces from attending private assemblies. It also protects the right of association with syndicates, parties, and unions, but bans associations deemed hostile to the “system of society.” This clause is vague enough to allow crackdowns on groups that want to effect any change at all, as any challenge to the status quo could be interpreted as a threat to the “system of society.” And needless to say, the military’s massive slaughter of Islamist protesters bodes poorly for this provision as well.

The declaration does not ban religious-based political parties, but it does ban parties formed on the basis of discrimination by sex, origin, or religion. This formally leaves room for the participation of Islamist and other religious parties in the political sphere, so long as they are judged to be “inclusive.”

Indeed, religion is not out of the game. In fact, Article 1 of the declaration states that Islamic Sharia is the country’s main source of legislation (so the Sunni university at Al-Azhar is still an important political player). Of course, if law is to be based on principles of Sharia—presumably as interpreted by men—then this hardly squares with the equality of all citizens before the law. And that is to say nothing of what this means for Christian or secular Egyptians.

The declaration also calls for an independent judiciary. It justly states: “Any provision in the law on the immunity of any administrative action or decision from judicial supervision shall be prohibited.” However, Article 19 declares that the military judiciary is an independent judicial body, insulating the military even more from any possible oversight. This official immunity from supervision contradicts the article that follows, which states that the Armed Forces are owned by the people—it seems like the opposite these days, doesn’t it?

On a more hopeful note, Article 22 says that a national defense council will be established by the president to “consider issues related to means of securing the country and its safety and discussing the Armed Forces’ budget. It shall be consulted in bills related to the Armed Forces.” If that president is elected, not appointed, then this is an important step in establishing public oversight of the military, no longer allowing it exclusive rights to manage its own budget and make strategic decisions pertaining to the use of force.

The declaration asserts that Interim President Adly Mansour has full legislative power until a new president is elected, at which point legislative authority will be transferred to the House of Representatives. This means that the military can issue executive decisions through Mansour until elections are held, a worrying notion in light of its recent behavior.

In the mean time, the declaration lays out a map to amend the 2012 constitution. The committee tasked with doing so is composed of two members of the Supreme Constitutional Court, two judges from the State Council, two judges chosen by the Supreme Council of Judicial Bodies, and four constitutional law professors at Cairo University chosen by the Supreme Council of Universities. Fortunately, most of these drafters will not be appointed directly by the military, though the armed forces will still exercise outsized influence on the process.

This committee has 30 days to propose amendments. The members will submit their recommendations to a 50-person assembly, which will in turn have 60 days to present a constitutional draft to the president, who must submit the draft for public referendum within 30 days—meaning, unfortunately, that the military has 30 days to make its desired alterations. After approval, elections to the House of Representatives must occur, and “the call for holding a presidential election should be within a week at most of the first convening of the House of Representatives.”

The committee, which allowed political parties and citizens a week to submit suggestions, has said that it received many proposals calling for the prohibition of religious parties (as expected) and the abolition of the upper house of parliament. Sources claim that neither the president nor the ministries of defense and the interior (who will have their go at the draft later) submitted any proposals, nor did Al-Azhar or any of the large Islamist parties. It is surprising that these latter groups did nothing, as one would imagine that they would seek to protect themselves in light of recent events.

With Egypt backsliding into what can only be described as a military dictatorship, prospects for genuine democratic rule appear more distant than ever. But with the military firmly in control for now, the next steps lie in this constitutional declaration. For the time being, these are the rules by which Egyptians must play.

Sarah Gold is a contributor to Foreign Policy In Focus.