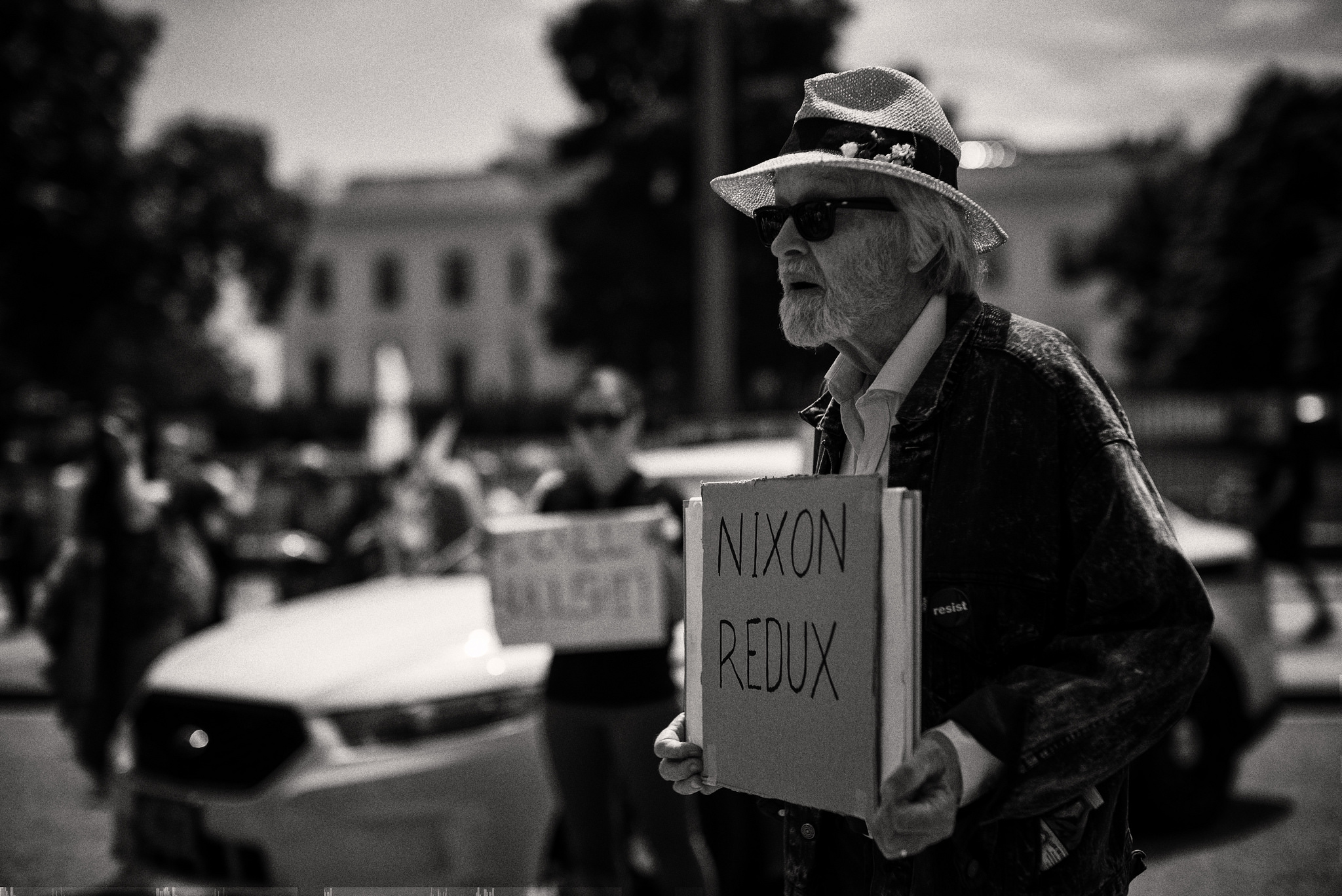 The Nixonization of Donald Trump

In the aftermath of Watergate, the country turned to the left. Are progressives positioned to capitalize on Trump's stumbles today?
By John Feffer | May 17, 2017

The comparisons are multiplying. There was Trump’s appeal to the “silent majority” during the presidential election, his later adoption of the “mad man” theory in his foreign policy, his possible taping of conversations, his arm-twisting of top officials, and his all-around involvement in the scandals enveloping his administration.

In a late night monologue last week, Jimmy Kimmel delivered a particularly apt zinger: “When we said Trump should act more presidential, we probably should have specified — we didn’t mean Nixon.”

But it’s worse than that. I knew Richard Nixon (well, not directly), and Donald Trump is no Richard Nixon. For all of his manifest flaws, Nixon at least had an idea of what he was doing in the White House. Despite being a pro-business racist who detested environmentalists, Nixon supported new environmental laws, championed economic policies that would have placed him on the left side of the Democratic Party, and even expanded affirmative action.

But it was foreign policy that ultimately defined Nixon’s non-Watergate legacy, for better or worse. Even as he was becoming entangled in domestic scandal, Nixon was executing the foreign policy equivalent of a Simone Biles balance-beam routine. In the early 1970s, along with his national security advisor Henry Kissinger, Nixon was opening up China, negotiating arms control agreements with the Soviet Union, trying to extricate U.S. troops from the quagmire of Vietnam, and attempting to prevent tensions in the Middle East from escalating into all-out war.

Indeed, it was these deviations from the hardline anti-Communism of the militarist wing of the Republican Party that ultimately caused Nixon’s downfall, according to a detailed account by Len Colodny and Tom Schactman in their book The Forty Years War.

The steady drip of resentment over his radical alterations to U.S. foreign policy, particularly with regard to his overtures to the Soviet Union and China, accumulated until it leached away many former supporters on the right. As he weakened, his foreign policy opponents’ attacks grew bolder, taking away more support. Attacks from within the executive branch added to the erosion. Eventually, with no conservative friends left, Nixon opted to resign.

In other words, Nixon went up against his era’s version of the Blob, and the Blob struck back. In so doing, Nixon’s right-wing enemies redefined themselves. Henry “Scoop” Jackson, Richard Perle, Paul Wolfowitz, Fred Ikle, Albert Wohlstetter: Aghast at Nixon’s apostasies, these figures became the core of what would become the neoconservative movement.

There are some parallels between the problems that have dogged Trump and Nixon. The ur-scandal of the Trump administration involves its closeness to Russia at a time when the foreign policy establishment has preferred a more hardline stance. Trump, as candidate, seemed to want to extricate U.S. troops from quagmires overseas. And the neocons were so upset with his foreign policy utterances that they again crossed party lines — just as many neocon Dems did back in the 1970s — to back Hillary Clinton for president.

But Trump is not Nixon, and these parallels are superficial. The focus on impeachment, while satisfying as an example of delicious comeuppance, is a distraction. The truly important question remains: What kind of backlash will Trump’s apostasies create and who will take advantage of the political opportunity?

Maybe Trump was making nice with Russia, some speculated early on, because he hoped to better contain China. Or perhaps he simply wanted Moscow’s help in bombing the Islamic State into smithereens.

The dealings with Russia that may ultimate deep-six Trump have had an entirely different character.

First, Trump is drawn to autocrats with high popularity ratings. Second, Putin is a favorite figure among the far right in the United States — white supremacists protesting the removal of a statue of Robert E. Lee in Charlottesville last Saturday, for instance, chanted “Russia is our friend” — and Trump wanted this constituency on his side during the campaign. Third, Putin is putting together a hard-right coalition of leaders in Europe (the National Front in France, the UKIP in England, the Alternative for Germany, the Freedom Party in Austria) who promise to undermine the European Union and support Russian aims in Ukraine. Trump is competing for the affections of the same group.

Then there are the economic benefits that will accrue to Trump and his pals in the extraction industries from better relations with Russia. Lift the sanctions imposed against Russia in the wake of its interventions in Ukraine and U.S. oil and gas companies can resume their deal-making with the oligarchs.

These cultural sympathies and economic interests combine to form the circumstantial evidence behind possible political collusion. Unfortunately, there isn’t much else to go on. Yes, during the transition, National Security Advisor Michael Flynn had some discussions with Russia ambassador to the United States and lied about them. Attorney General Jeff Sessions misled the Senate Judiciary Committee about his contacts with Sergei Kislyak. Two other national security aides, Carter Page and J.D. Gordon, also had conversations with Kislyak.

Somebody hacked into the Democratic National Committee’s server as well as John Podesta’s email account and passed on the information to WikiLeaks, which released it to maximum effect during the campaign. It’s more than likely that the hackers were connected to the Russian government — and even Trump himself seemed to accept this allegation in his tweets last July and remarks to the press a week before his inauguration — but definitive proof has not materialized. A dossier compiled by a former British intelligence operative suggests that Russia has compromising material about Trump that it can use to blackmail him. But this, too, remains speculative.

So, Trump advisers met with Russians, and the Russians probably interfered in the U.S. election (as they likely did recently in the French elections as well). He even shared classified material with the Russians. This is stupid, with profound ramifications for U.S. standing among its allies, but it’s not illegal. The smoking gun remains elusive.

With its attempts to cover up its Russian connections, however, the Trump administration has been blowing a lot of smoke. Why did Flynn and Sessions lie? Why did Trump try to prevent former acting attorney general Sally Yates from testifying on Russia before a Senate committee? Why, most recently, did Trump fire FBI chief James Comey after he’d asked for more money for the Russiagate investigation? Did the president ask Comey to back off from the Russiagate investigations, which would amount to an obstruction of justice?

Where there’s smoke, there’s likely to be a smoking gun. Nixon, too, was undone by the cover-up.

The first project of his covert band of “plumbers” was a break-in of the office of a psychiatrist to gather information to discredit Daniel Ellsberg, who’d leaked the Pentagon Papers to the news media. Oddly, the papers covered U.S. involvement in the Vietnam War only up to 1967, before Nixon was elected to his first term as president. He’d have been better served to ignore the revelations.

In June 1972, the “plumbers” attempted to plant bugs in the Democratic National Committee headquarters at the Watergate apartment building. Even though the police caught the operatives, the scandal didn’t immediately gather force. That fall, Nixon went on to win the presidential election by the largest margin ever. His foreign policy initiatives, meanwhile, continued to reshape global politics.

But the “plumbers” weren’t the only thing rotten about the Nixon crowd. Misconduct was rampant in the GOP, the Nixon campaign, and his administration — corruption, abuse of power, even a spy ring run by the members of the military to keep tabs on the administration’s foreign policy initiatives. Infighting and dissatisfaction at the highest levels was producing leak after leak that not even the best plumbers could plug.

So far, it would appear that the Trump people are simply too incompetent to run the kind of covert ops that the Nixon and company attempted. But the pure avarice of Trump and his family, their ignorance of the law they don’t know and their flouting of the law they do know, and their general contempt for democratic procedure all make misconduct a certainty. Trump’s refusal to release his tax returns, the obvious subversion of the emoluments clause, and the rewards that the Trump empire will reap from executive orders and pending legislation all add up to the same kind of environment of misconduct that surrounded Nixon as well.

Impeachment would remove the rotten head, but we’d still be stuck with the rest of the stinking fish.

Nixon, as Colodny and Shachtman point out, was undone by forces to his right, not his left. Today, the left is even weaker than it was in the early 1970s. Republicans control Congress, have a majority of state legislatures, and now, with Neil Gorsuch installed in the Supreme Court, have an edge in the judicial branch as well.

Today, some Republicans are beginning to edge away from their party’s standard-bearer — but not for the same reasons that they let Nixon twist in the wind.

Trump has backed away from his most Russia-friendly proposals, even refusing to issue a waiver that would have allowed Exxon to bypass sanctions and drill for oil in Russia. The president no longer threatens to pull out of NATO. He bombed the Syrian army. He is even considering a surge in Afghanistan of several thousand U.S. troops. This assertion of American power should appease both the hawks in the Republican Party and the neocons who were skeptical of Trump’s “America First” policies.

Rather, it’s Trump’s handling of crises, his mercurial policy shifts, his constant gaffes, and his half-baked proposals on banning Muslims from entering the country, replacing the Affordable Care Act, and overhauling the tax system that have alienated some of the party’s rank-and-file from the president.

The Republican Party is in a quandary. They tried to get rid of Trump during the presidential primary last year and failed miserably. They made their accommodation to their new leader, but he has galvanized the opposition, which has been so evident at town meetings throughout the country. Conservative columnist Jennifer Rubin ponders the future of the Republican Party:

Perhaps the tribal instinct and abject fear of Trump’s wrath will keep elected Republicans tethered to the failing president through next year. At that point, the potential for a wave election for Democrats looms large. If Trump is still around by November 2018, a thrashing at the polls may be the only thing to persuade Republicans to walk away from Trump.

The key question is: Who will take advantage of this opportunity?

In the aftermath of Watergate and Nixon’s resignation, the country turned to the left. Détente with Russia and China continued, the U.S. finally pulled out of Vietnam, and various congressional committees exposed U.S. wrongdoing around the world and sought to rein in the abuses of power. George McGovern, despite his trouncing in the 1972 election, had renewed energy and authority, and the Democratic Party surged leftward.

This time around, the Republican Party will be reeling even if Trump isn’t impeached. Perhaps the Sanders wing will take over the Democratic Party. Perhaps a new progressive party will emerge to channel the widespread discontent with the political elite and the status quo. Or perhaps a Macron-like figure will come along to revitalize the “vital center” and appeal to voters tired of polarization.

Trump is a forest fire raging out of control, destroying everything in his path. The sooner we put out the flames, the sooner we can expect new growth.

Let’s just hope that, as in the immediate post-Nixon era, what doesn’t kill us will ultimately make us stronger.