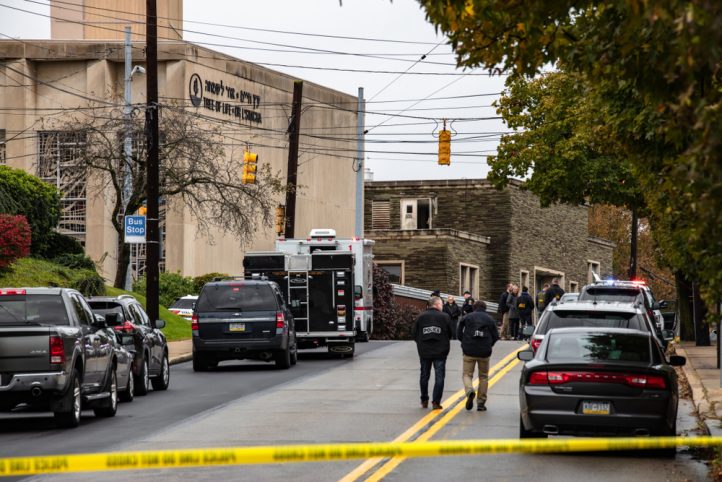 Eleven people died on Saturday. And while the president of the United States and his supporters will vehemently deny it, he is partially to blame.

The eleven were riddled with bullets while I was sitting at home eating breakfast less than a mile away. They were shot by a man carrying three handguns and a military-style assault rifle. Two other people, and four policemen responding to the shooting were wounded.

The eleven who were killed died as they attended services at their synagogue. Their attacker, Robert Bowers, had posted numerous anti-Semitic rants on his social media account, and the assumption was made by many that he was motivated by his hatred of Jews.

While that hatred no doubt is one reason for his crimes, it was not the only one. There are a dozen synagogues in and around the Squirrel Hill neighborhood where he carried out his attack. The killer’s residence is far to the west and only four miles from another synagogue and less than seven miles from a Jewish Community Center. And yet he decided to drive 13 miles to attack the Tree of Life Synagogue in Squirrel Hill.

The reason he chose that particular temple to attack can also be found in his social media posts. He chose Tree of Life because it was working with the Hebrew Immigrant Aid Society. HIAS was established in 1881 to help Jewish refugees fleeing Eastern Europe. Over the years it shifted its focus and, about two decades ago, began to help refugees of different faiths and from other parts of the world.

Less than two hours before he chose to act, Bowers made one last post. He wrote, “HIAS likes to bring in invaders that kill our people. I can’t sit by and watch my people get slaughtered. Screw your optics. I’m going in.”

Whether it is the caravan from Central America, the Muslim ban, building a wall on the border, Trump has made anti-immigrant paranoia and hysteria a fundamental part of his speeches at his endless series of campaign rallies. There is simply no plausible way to ignore the fact that his language validated the perverted and paranoid worldview of Bowers and thereby encouraged his actions. When Trump recently described himself as a “nationalist,” he didn’t even bother with his usual dog whistle. He bellowed his xenophobia and intolerance, and the message to people like Bowers could not have been clearer.

A vigil to honor the dead and wounded was held at the main intersection in Squirrel Hill Saturday night. It was attended by thousands and organized by the students of the local high school. They spoke eloquently about the need to never forget the victims and to do everything possible to prevent such horrible incidents from happening again. But unless they are motivated to organize politically, much like the students from Stoneman Douglas High School did after the mass murder in Parkland, Florida, nothing will change.

One thing that could be done would be to make the owners of social media companies civilly and criminally responsible for what is posted on their websites just as newspaper publishers are. They prefer to let algorithms do the work, however, since computer formulas don’t take coffee breaks or ask for time off. But those formulas will also never be really able to filter out the hate and disinformation. Since social media has become an enormous multi-billion-dollar industry, the owners of those companies can now probably buy enough lobbyists and politicians to ensure that that kind of change does not happen.

Another change that certainly will not happen is to treat our national mental illness when it comes to guns. No one needs a military-style weapon whose only purpose is to kill as many people as quickly as possible.

Real change might be possible, however, if it began at the top. Trump has labeled the massacre in Squirrel Hill an “anti-Semitic crime.” When asked about it by reporters, he replied: “It’s a terrible, terrible thing what’s going on with hate in our country and frankly all over the world, and something has to be done.”

He should start by looking in the mirror. He has proven totally incapable of either introspection or taking responsibility for what his rhetoric has wrought. It will, therefore, be up to the voters to begin to take the steps necessary if the future is to be any different. Politicians whose only policy is fear-mongering and who believe the answer to gun violence is more guns are not going to bring about change.

Eleven people died on Saturday. And Donald J. Trump can lie and deny as much as he always does, but some of their blood is on his hands. And it will not wash off until he really does tone it down.

Dennis Jett is a professor in the School of International Affairs at Penn State University. A former career diplomat, he served as ambassador in Peru and Mozambique, on the National Security Council and in Argentina, Israel, Malawi, and Liberia. He is the author of four books published by Palgrave Macmillan.