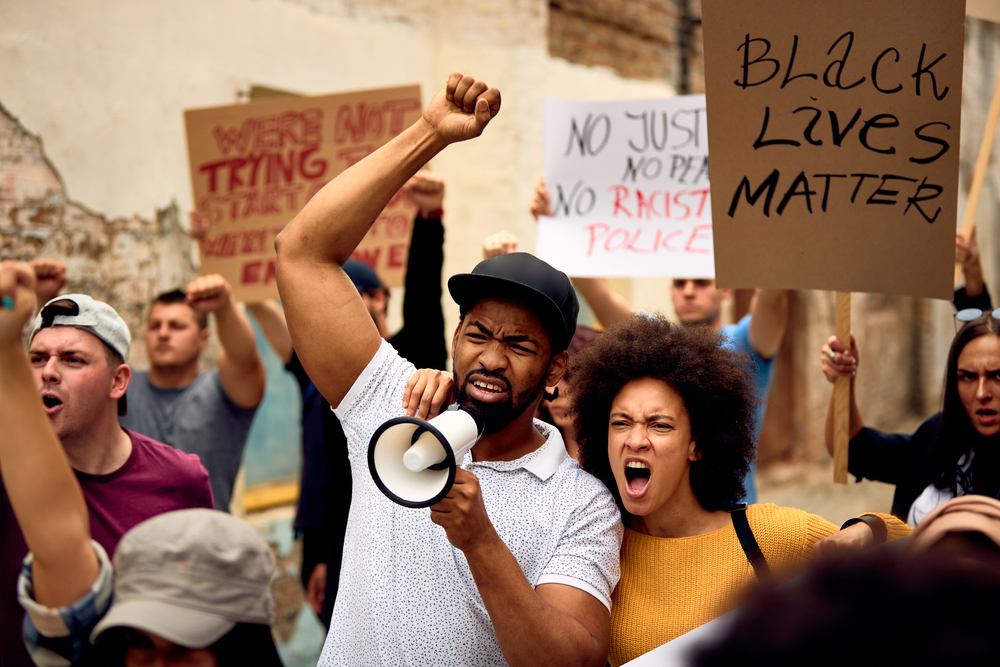 The Politics of American Protest, with a North Korean Twist

The right wing has attacked Gwen Berry for her Olympic trial protest. A North Korean defector has joined that chorus.
By John Feffer | July 14, 2021

Gwen Berry recently protested the playing of the U.S. national anthem by turning away from the flag and holding up a shirt that read “activist athlete.” The protest took place at the Olympic trials in Oregon where Berry had placed third in the hammer throw competition. Her action immediately drew angry responses from the right-wing side of the political spectrum.

A number of right-wing politicians and commentators called her unpatriotic and demanded that she be kicked off the Olympic team. As Tom Cotton, Republican senator from Arkansas, put it: “If Gwen Berry is so embarrassed by America, then there’s no reason she needs to compete for our country at the Olympics.”

Conservative outrage at protests against the American flag and the national anthem is not unusual. When football player Colin Kaepernick knelt during the national anthem during the 2016 season, to protest racial injustice in the United States, he was roundly criticized in conservative circles. When he became a free agent the next year, no football team would sign him, despite his obvious talents as a quarterback.

Gwen Berry and Colin Kaepernick are both African Americans. At one level, they are protesting the history of racial injustice in the United States, represented by the national anthem. The Star Spangled Banner was written by Francis Scott Key, who once declared that Black people were “a distinct and inferior race.” His composition includes a verse, rarely sung, that criticizes Black Americans who fought on the British side in the War of 1812 in order to gain their freedom from slavery. The Star Spangled Banner became the national anthem only through the efforts of groups that supported the losing Confederate side of the Civil War.

At another level, Berry and Kaepernick are protesting the current racial injustices in the United States, particularly the police violence against African Americans. The murder of George Floyd in Minneapolis in May 2020 is only the most famous example of the brutality that African Americans have experienced at the hands of police forces throughout the country.

Berry and Kaepernick are not alone in their outrage. The demonstrations in the wake of Floyd’s murder, which involved between 15 and 26 million people, were the largest in American history. Protests also spread to over 60 countries around the world.

So, right-wing critics are not just responding to the symbolism of these athletes taking a stand. They are deeply uncomfortable with the popularity of those sentiments.

Most of these critics are the white men and women who dominate the Republican Party and the right-wing media. But one voice raised against Gwen Berry’s action was truly unexpected.

It came from a North Korean defector.

Yeonmi Park is a human rights activist who was born in North Korea and left the country as a teenager with her mother. She has acquired an international reputation on the basis of several speeches and a book that details her harrowing experiences leaving North Korea and making her way, eventually, to the United States. Her story has also generated considerable controversy for its numerous inconsistencies.

Park has become something of a celebrity in right-wing circles in America. After Gwen Berry’s protest, Park appeared on Fox News show Fox & Friends to denounce the American athlete.

“If she did the exact same thing at this very moment, if she was North Korean, not only herself will be executed, [also] eight generations of her family can be sent to political prison camp and execution,” Park declared. “And the fact that she’s complaining about this country, the most tolerant country, she doesn’t really understand history.”

Park’s comments are exceptionally strange. By her reasoning, no one should protest anything in the United States because the conditions here are better than in North Korea. And American protesters shouldn’t exercise their freedom to protest…because no such freedom exists in North Korea.

Of course, the opposite is true. The ability to protest peacefully is what makes the United States a great country, and Gwen Berry and fellow protestors are proving that point, over and over again. Indeed, the country has made great strides because of peaceful protests, not despite them. The civil rights movement, the women’s movement, the peace movement, the LGBTQ movement: all of these protests have made America an infinitely better place.

America is not a particularly tolerant country, as the response to Gwen Berry’s protest demonstrates. But it has become a more tolerant country over time because of this history of protest. And that is the history that Yeonmi Park so obviously doesn’t understand.

There is another implication in Park’s words: that the suffering of African Americans is somehow less painful or legitimate than the suffering of North Koreans. “I was a slave,” Park told the Fox program. “I was sold in China in 2007 as a child at 13 years old…There is actual injustice.”

Suffering is not a competitive sport. What many North Koreans experience in their country and North Korean defectors suffer in China is truly awful. And what many African-American experience in the United States is also truly awful. They are not comparable, however. They have to be understood in their own contexts. And activists must fight against these injustices here, there, and everywhere – preferably together rather than at cross-purposes.

The sad truth is that Yeonmi Park has become a mouthpiece for the American right wing. Fox News delights in showcasing her views. On one program, for instance, she compares her studies at Columbia University to the brainwashing that she experienced in North Korea, leading her to conclude that the U.S. future “is as bleak as North Korea.” On another occasion, she combined both her own knowledge of North Korean rhetoric with the similar-sounding nationalist slogans of Trump supporters when she told Fox Business that the American ” education system is brainwashing our children to make them think that this country is racist and make them believe that they are victims. It’s time for us to fight back. Otherwise, it might be too late for us to bring the glory of this country back.”

Since she knows a thing or two about brainwashing, Yeonmi Park might want to take a more critical look at the propaganda of the American right wing. If she does, she might just see that Gwen Berry’s protest is what makes America great. And she might understand how the nationalism and intolerance of Fox News and the Republican Party are pushing the United States ever closer to the North Korean reality that she so despises.