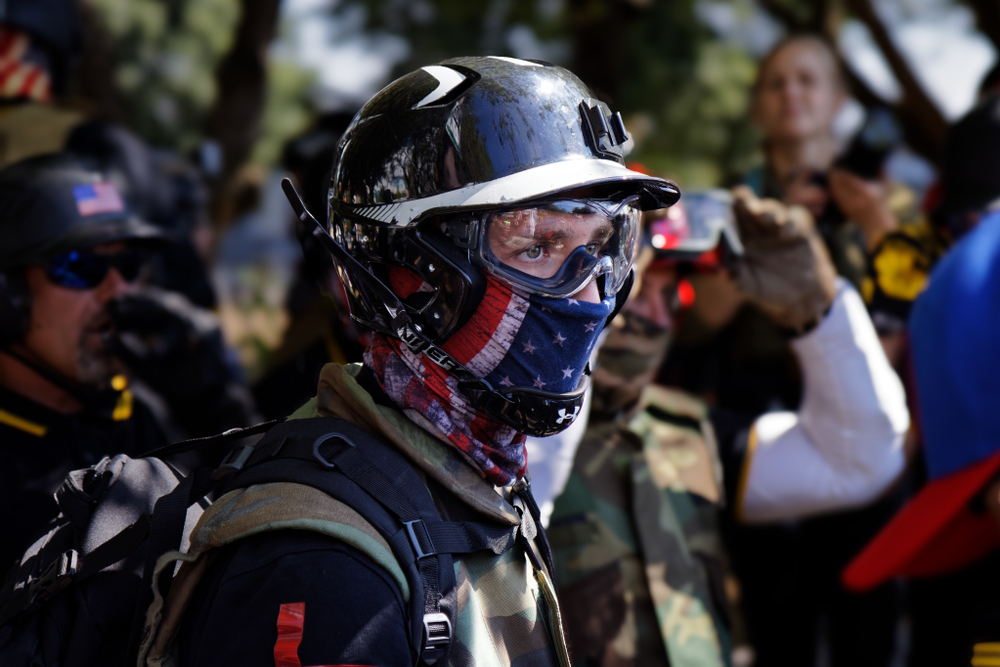 The Problem of Surplus White Men

Who lies at the intersection of guns, right-wing fanaticism, pandemic and climate change denialism? Who ensures that racism continues to course through the lifeblood of the country? Who stands in the way of gender equality? Who supports foreign wars and the military-industrial complex? Who is getting hit hard by the erosion of the manufacturing base in the heartland?

White men are twice as likely as non-white men and white women to own guns. Although white women espouse racist right-wing views as much or even more than white men, it is the latter that overwhelmingly show up to vote, to gather with guns on the street, and to intimidate non-whites in person and on social media.

Conservative white men have been at the forefront of climate denialism, according to a fascinating sociological study from 2011, and it’s not just Donald Trump who hates to wear masks during a pandemic but men more generally. A significant gender gap exists on the use of force, with women considerably less likely to support military intervention.

Take the example of Brad Pascale, Trump’s former campaign manager. He was detained in Florida this week after allegedly hurting his wife, waving around guns, and talking about suicide. After his demotion to a digital consultant position on the campaign in July, he no doubt was worried about losing work altogether after the November election.

There it is in a nutshell: white male violence, right-wing politics, and anxiety over economic security. And residual white privilege. If Pascale were African-American, an encounter with the police like that might not have ended peacefully.

Of course, I’m not talking about all white men. Plenty of white women have jumped on the alt-right bandwagon. And American conservatives can always point to a few people like Clarence Thomas, Ben Carson, and Diamond and Silk to allege that their ideology is color-blind.

But white men who are all revved up with no place to go pose the greatest challenge to American democracy. They are the core of Donald Trump’s support. They are showing up on the streets in militia formations and with Proud Boy banners. The “manosphere” of online anti-feminism is the gateway for many right-wing activists who worry about being “replaced” by minorities and immigrants. And white men have been struggling with a long period of enormous economic dislocation that has turned them into a surplus labor force.

If Donald Trump loses in November, these white men will remain a problem. After all, unlike liberals who threaten to decamp to New Zealand if Biden loses, disgruntled Trump bros are not going to just up and leave the United States.

Yet that’s precisely how countries long dealt with the problem of surplus white men.

In the bad old days, countries handled surplus men by sending them off to populate far-off lands.

The political and religious misfits of the incipient British empire sailed off to settle the land that hugged the eastern seaboard of North America. Later, the British exported its unruliest men to the prison colony of Botany Bay in Australia. The imperial nations of France, Spain, the Netherlands, and Portugal similarly redirected male energy into meeting, enslaving, and killing the locals of distant places. Those white men who didn’t have imperial realms to colonize —  Germans, Italians, Scandinavians, Irish — ended up founding America’s early immigrant communities.

Men with little prospect of improvement have always been a potential source of trouble. They turn to drink, to crime, to revolution — and sometimes all three — if left to their own devices. The law of primogeniture, whereby the oldest son inherited all and left the other male heirs penniless, only compounded the problem by producing a seemingly endless supply of dispossessed men.

For its first 100 years of existence, the United States had a convenient safety valve for such male restlessness: the Western frontier. In the Midwest, the Southwest, and the Far West, the industrious built family farms, the greedy sought gold, and the opportunistic robbed banks. Along the way, they did what white men often did in those days: kicked the locals off the land and killed them when they refused to leave.

When the frontier closed at the end of the 19th century, white men enlisted to expand a new American empire in the Spanish-American War and through expeditionary interventions in Latin America. World War I and the flu epidemic of 1918 “solved” the problem of the surplus with a ruthless cull of more than 100,000 men. Later, World War II removed four times that many from the equation.

Since that time, America has continued to go to war. But the U.S. government also made an effort to deal with its white male population by creating well-paying jobs in an expanding manufacturing sector and offering returning soldiers a leg up through programs like the GI bill.

This golden age of American economic growth, however, was primarily a golden age for the white American male. White women, if they broke with tradition to enter the workforce, earned considerably less than their male counterparts. And Black Americans, especially prior to the successes of the civil rights movement in the mid-1960s, were relegated to second-class citizenship.

In 1960, a mere 2 percent of women and Black men worked in high-wage jobs like engineering and law. Virtually all doctors in the United States were white men. Racism and sexism permeated the immediate post-war government programs.

In the 1960s, as a result of powerful social movements, women and minorities began to rise professionally. They continued to make gains in the ensuing decades, but the U.S. economy as a whole hit a brick wall in the early 1970s. Real wages peaked in 1973. Imports began to appear more frequently on supermarket shelves and in car showrooms. Unions began to shed members in the 1970s and 1980s. And by the 1990s, the manufacturing jobs began to shift overseas — first with a massive expansion of the maquiladora program in Mexico after the passage of NAFTA and then to low-wage locations in Asia. Between 2000 and 2014, the United States lost 5 million manufacturing jobs.

These economic transformations left behind many male blue-collar workers. They could still get jobs, but those jobs didn’t pay as well as the manufacturing positions of the golden age. In response, this proletariat didn’t organize against the ruling capital class. Increasingly, these workers listened to sexist, racist, and xenophobic slogans that blamed women, minorities, and immigrants for taking away their jobs. The financial crisis of 2008-2009 swelled the ranks of the new right with many angry white men from the middle class as well.

This is not a purely American problem. Angry white men have been a fixture in European right-wing politics, in Australia, in Israel. Machismo has long played a role in Latin American politics and, despite the rise of feminism across the continent, continues to influence electoral outcomes from Colombia to Brazil. Even China, where men can get jobs but not necessarily wives, has to deal with a problem of surplus men, given the population’s preference for male babies. India, too, faces an excess of 37 million men.

But the United States must address a particularly toxic version of this problem because of the country’s endemic racism, polarized politics, and Rust Belt economics. Angry white men contributed to the Reagan revolution of the 1980s, the Gingrich backlash of the 1990s, and the rise of the Tea Party in 2009.

But it wasn’t until 2016 that they found a leader just like them.

The Future of Surplus White Men

Donald Trump would seem an unlikely spokesperson for white workers left behind by the deindustrialization of the United States. With his business empire, Trump has invested overseas in more than 30 countries, outsourced the production of his own brand-named items to foreign companies, and hired undocumented workers for his U.S. facilities. As his recently leaked tax returns reveal, he has also been spectacularly unsuccessful with his ventures even as he has cheated the government out of what he owes in income tax.

Trump knows that playing to Wall Street is not a winning political strategy. Rather, as I point out in a piece in TomDispatch this week, the president has put himself at the front of a white male mob, channeling the violent vigilantism that has erupted periodically throughout American history. In this way, Trump lucked out by appealing to just enough white voters in economically distressed states to eke out an Electoral College victory in 2016.

One month before the 2020 election, the polls suggest that Trump may not be so lucky this time.

The white mob still supports him for all his efforts at closing borders, suppressing minority votes, and celebrating the racist history of the United States. And he still supports the white mob, this week refusing to denounce white supremacy in the first presidential debate. But the president hasn’t delivered on the economy, and the pandemic has claimed too many victims to be easily swept under the rug.

Whoever wins in November, the problem of surplus white men won’t go away. The Democrats, entranced by “third ways” and “post-industrial” economics, have ignored white male workers at their electoral peril. Joe Biden has courted this vote by appealing to his working-class roots in Scranton. But he’ll have to pay more than lip service if he gains the White House.

The past option of sending surplus white men off to other lands is no longer on the table. In taking the problem of surplus white men seriously, it’s not necessary to jettison identity politics or pander to sexism and racism.

Rather, the answer is to create well-paying jobs for all through Green New Deal policies. The bulk of these jobs — retrofitting buildings, creating new energy infrastructure, building a fleet of new electric cars — need to be open to those without college education. As automation advances, new educational opportunities have to be made available as well or else technology will just add to the problem of surplus labor.

Racism and sexism won’t magically disappear with a Green New Deal. Nor are jobs alone the answer. They need to be jobs that promise a future and a sense of belonging to something greater. The Trump campaign has provided its followers with this sense of belonging. So, for that matter, have the Proud Boys. Together they have turned surplus white males into an urgent political problem for this country.

A personnel change in the White House will not solve this problem. But putting into place a dramatic new economic program that relies on working-class Americans to save this country? That puts white men shoulder to shoulder with workers from all backgrounds on behalf of a common purpose? And that links up with Green New Deals in other countries?

That might do the trick of turning a surplus into an asset.