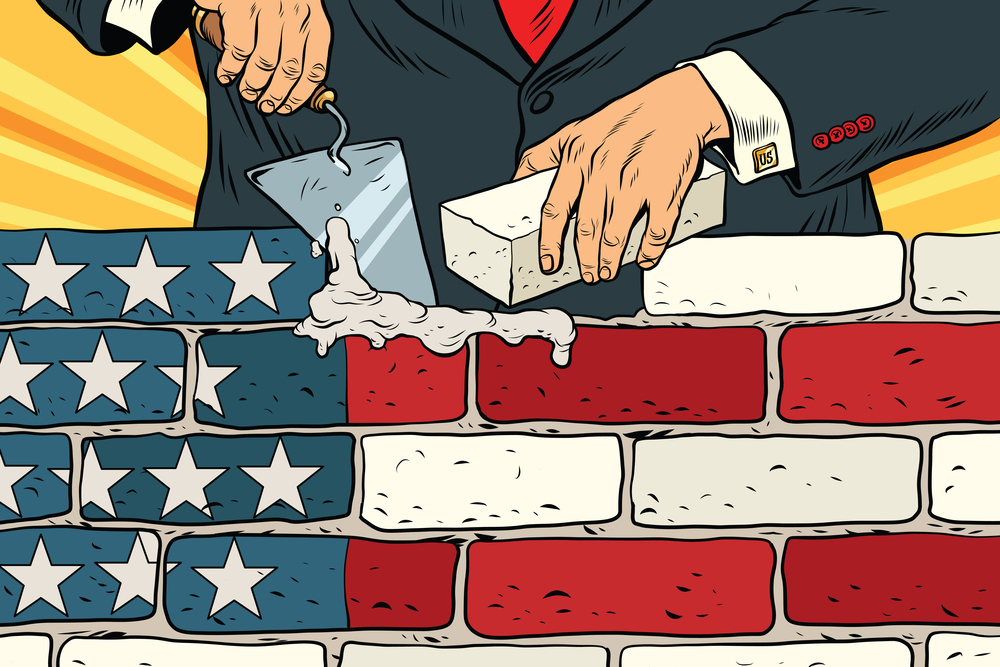 The Psychology of the Wall

Wall are cropping up all over the world. But as with guns, the sense of safety and security that comes from a wall is almost entirely illusory.
By John Feffer | February 13, 2019

Geopolitics, like thermodynamics, has its laws of conservation. If a wall comes down in one place, you can bet that it will go up somewhere else.

It wasn’t long after the Berlin Wall fell that different kinds of walls went up in Eastern Europe. New borders separated the Czech Republic from Slovakia, and then, after much bloodshed, the new successor states of former Yugoslavia.

By the end of the 1990s, barriers were being established in small towns in the Czech Republic, in Slovakia, and in Romania to separate Roma and non-Roma populations. Germans on both sides of the former Berlin Wall were declaring that they were one people. But in other countries in the region, the majority population was insisting, rule of law notwithstanding, that the citizenry was not one people and a wall was necessary to emphasize the distinction.

These discriminatory walls anticipated the next round of walls in the region: to keep out immigrants. Hungary built a wall on its border with Serbia in 2015, and then a second one in 2017 just to be sure. Germany was letting in more than a million desperate people. Hungary and most of the rest of Eastern Europe, after making the earlier case that they belonged in the European Union, were shutting the door after themselves.

It’s not just Eastern Europe. The Brexit vote was basically an effort to build a big wall across the English Channel to separate the United Kingdom from Europe. Keeping out immigrants was a major motivating factor.

Walls are practically everywhere, alas. You can find a very sad set of walls separating Israel from the Occupied Territories. Spain has walled off its cities of Ceuta and Melilla from the rest of Morocco (yes, there are two Spanish towns in North Africa). There’s a wall between Saudi Arabia and Iraq. According to Elisabeth Vallet, a geography professor at the University of Quebec-Montreal, there were 15 border walls around the world in 1989. That has jumped to 77 today.

As with so many of his fixations, Donald Trump’s call for a wall is hardly original. And this wall, too, is a response to the collapse of walls elsewhere. Economic globalization was responsible, from the 1980s on, for gradually tearing down all manner of barriers: to trade, to finance, and to the movement of manufacturers. Trump and his economic populists have done as much as they can to put back some of those barriers, for instance by withdrawing from the Trans Pacific Partnership and by slapping tariffs on products from allies and adversaries.

But Trump’s wall along the Mexico border is first and foremost about keeping people out. Economic globalization removed some barriers to the movement of people, but primarily those with highly sought-after skills. As for the truly desperate who were trying to climb over walls and breach borders, they were often motivated more by war and the violence of non-state actors.

These two types of “open borders” — one for money, the other for bodies — have often been confused in the public imagination. Or politicians have deliberately conflated the two, as Trump supporters did in the case of the infamous Hillary Clinton quote about “open borders.” She quite obviously meant economic globalization, not immigration, which was troubling in its own right, but for different reasons.

Trump is not a big fan of openness, in any of its manifestations. He loves the idea of exclusivity: private jets, elite parties, membership-only clubs like Mar-a-Lago. He prefers not to reveal his tax returns. He’d like to keep all of his financials well hidden. In Trump’s mind, walls define the parameters of privilege. Whenever he can wall off the press, his “low-intelligence” critics, the populations of “shit-hole” countries, he does so in a New York minute. He devises travel bans. He instructs his press secretary to dispense with the traditional daily press briefings. He stays within his Fox News enclosure. Even when he prances before the public in mass events, he wants to make sure that everyone in the crowd is on his side.

The Trump brand has always been about exclusivity, though of a rather tawdry variety: the appearance of prestige instead of the reality. As the writer Fran Lebowitz once remarked, Trump is “a poor person’s idea of a rich person.” It could also be said that he’s a non-political person’s idea of a president. He projects the appearance of a president — handshakes with other leaders, photo ops in the Oval Office — without any of the substance. All of his talk of “fake news” is just an indirect admission of his own doubts about his own authenticity as a president.

No surprise, then, that Trump is offering the appearance of security rather than the reality of security. A wall is largely a symbol. It means nothing when the United States refuses to address the true causes of insecurity, both at home and abroad. Nicholas Kristof did a nice column in The New York Times, drawn in part from my IPS colleagues’ National Priorities Project data, about all the sensible ways to spend $5.7 billion: on America’s children, on gun buybacks and drug treatment programs, on job training for prisoners, and on helping people overseas. That’s what a real president would support, not a “fake president.”

But let’s dig a little deeper. The wall addresses a core psychological insecurity. Trump supporters — and many others — feel as if their own privileges are evaporating. Those privileges are connected to race and gender (the angry white men who now swell the ranks of the Republican Party). But they are also connected to class (the blue-collar workers that once formed the backbone of the Democratic Party).

And don’t forget the oft-overlooked privilege of being American. U.S. citizens are feeling increasingly anxious as they watch the United States fail to achieve its objectives in one war after another — even as China expands its influence and Russia regains its great power status. Americans watch conflict, extremism, disease, and the other horsemen of the Apocalypse engulf other countries, and they feel as if America can no longer ride in on its white horse to save the day (the last time was perhaps World War II). Worse, they can hear the drumbeat of those hooves approaching the very shores of this country.

Trump and his supporters want that wall to prevent all these privileges — individual, communal, national — from leaking out. It’s the architectural equivalent of a gun. It’s for defense, a way for people to “stand their ground.” But it’s also compensation for powerlessness and lack of control. As with guns, the sense of safety and security is almost entirely illusory.

Liberals, unfortunately, don’t offer much of an alternative. They use more inclusive language when it comes to individual and communal privilege — though liberals are also guilty of constructing walls when they live in the ghettoes of the wealthy, send their children to private schools, or expunge any discordant viewpoints from their social media networks. These walls are largely invisible — just like the financial red lines that helped to create America’s urban wastelands — but they are no less powerful.

In terms of national privilege, liberals also believe in American supremacy, though they speak more in terms of restoring American leadership. America, in other words, has not really adjusted to a multipolar world, its more modest place within it, or the resulting anxieties that torment the souls of Americans.

The U.S. military, after all its failures around the world, no longer preserves American privilege. The U.S. dollar, weakened by U.S. debt and the strengthening of other national currencies, may soon lose its special glow. A wall is a fallback position, and a rather pathetic one at that. The United States desperately needs a leader — actually, a cadre of leaders — who can reconceive America’s relationship with the world, who can redefine U.S. privilege, who can see the importance of a shift from global power over to global power with. It would be a true privilege to elect such visionaries to leadership positions.

The world is waiting.