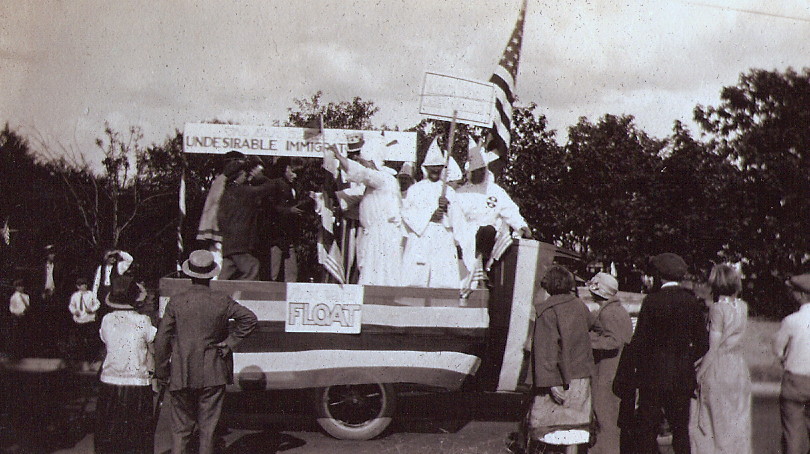 The Racism Heard Round the World

When the neo-fascist National Front is more willing to condemn neo-Nazis than Trump, we have a problem.
By John Feffer | August 30, 2017

On race relations, the United States has slipped into the same category as Burundi and Iraq.

After the violence in Charlottesville earlier this month — and the outrage generated by President Trump’s response — the United Nations Committee on the Elimination of Racial Discrimination issued an “early warning.”

As the chair of the committee, Anastasia Crickley, put it: “We are alarmed by the racist demonstrations, with overtly racist slogans, chants, and salutes by white nationalists, neo-Nazis, and the Ku Klux Klan, promoting white supremacy and inciting racial discrimination and hatred.”

The committee published such early warnings in the past to call attention to the potential for genocidal violence in Burundi and sectarian strife in Iraq.

In its recent statement, the UN also called on “the government of the United States of America, as well as high-level politicians and public officials, to unequivocally and unconditionally reject and condemn racist hate speech and crimes in Charlottesville and throughout the country.”

The statement didn’t mention Trump, but it clearly targeted the equivocator in chief. The president’s first impulse was to condemn the violence “on many sides.” A more measured denunciation of the Ku Klu Klan and white nationalism followed, which the “adults” in the administration had clearly spoon-fed the president. Only a couple days later, Trump was back praising some “very fine people” among the neo-Nazis and white supremacists who rallied around Confederate General Robert E. Lee’s statue in Charlottesville.

Condemning racism and Nazism would seem to be a no-brainer. But then, this is a president who refused to distance himself during the 2016 presidential campaign from neo-Nazi David Duke.

Trump’s response to the events in Charlottesville has further clarified that the president has no intention of moving to the political center. His stance has driven a deeper wedge between his extremist supporters and mainstream Republicans. Bob Corker (R-TN), who’d been in the running for Trump’s vice president and then his secretary of state, took the opportunity to question the president’s competence.

Even some members of the Trump administration, like top economic advisor Gary Cohn, have condemned the president’s refusal to take an unequivocal stand against racism and anti-Semitism. Secretary of State Rex Tillerson effectively separated the entire State Department from Trump’s utterances when he said that the president “speaks for himself.”

It’s bad enough the effect Trump is having on the state of race relations in the United States. But his attempt to turn back the clock to antebellum America is also having a powerful impact internationally, as the UN early warning suggests. The launch of the American Revolution in Lexington and Concord in 1775 was the shot heard round the world. Trump and the radical right want to launch a different revolution. They hope that the racist demonstration in Charlottesville is a salvo that changes not only America, but what America stands for in the world.

An East Timor activist once recounted to me his experience at a democracy seminar that the United States sponsored in his country. The American presenter was lecturing the activist and his colleagues about how American democracy works and why other countries should follow the U.S. model. The audience listened politely, but a ripple of frustration gradually made its way through the assembled activists.

Finally, one of them stood up in the question-and-answer period and said, bluntly, “Pardon me, but why should we take what you are saying seriously considering what’s going on in Florida?”

The seminar, you see, was taking place in December 2000 while the Supreme Court was in the process of helping George W. Bush steal the presidential election.

No amount of detailed explanation of checks and balances could make up for the quite obvious deformation of democracy that was taking place that year. No amount of “do as we say not as we do” rationalization could disguise the fact that the United States had failed to correct the malign influence of wealth on our political system even as we were attempting to export that system overseas.

The East Timorese were wise to take what Americans said about democracy with a grain of salt. Eight subsequent years of even more disastrous democracy promotion followed.

Then came Barack Obama, and many breathed a sigh of relief that American democracy could work. The election of the first African American president was a sign for many around the world that even a country born in racism and genocide could transcend its origins, that Americans could indeed achieve a more perfect union, that progress was something attainable by all.

Few were naïve enough to believe that the Obama presidency signaled the end of racism in American society. But the election of Obama promoted American democracy far more effectively than seminars in East Timor or U.S. tanks in Iraq.

Now, the world is suffering from the whiplash effect of Trump. It is one thing to come to terms with the fact that so many Americans had voted for Trump. Now, after Charlottesville, the international community must somehow wrap its mind around the fact that nearly 30 million Americans think it’s “acceptable” to hold neo-Nazi views. In other words, inside the United States is a community larger than North Korea that endorses extreme racist viewpoints. Let’s hope that this community of American ideologues never gets its hands on weapons of mass destruction any more powerful than Fox News.

Given these numbers — which are a reminder that it’s not just a handful of protesters and an unhinged president who flirt with white supremacy — it’s not surprising that the international reaction to Charlottesville borders on the apocalyptic.

Canadian columnists look south at the events in Charlottesville and see a real potential for a second civil war to break out. Turkish journalists see in these events the inexorable decline of America. Gideon Rachman, the Financial Times columnist, worries that Trump will stoke war overseas to distract from domestic woes like the aftermath of the Charlottesville events. “Under Donald Trump,” he asserts, “America looks like a dangerous nation.” Iraq, Libya, and many other tragic misadventures in recent years apparently didn’t disturb the sleep of the otherwise staid journalist as much as the current U.S. president now does.

But not everyone was upset with Trump’s swing-and-a-miss on Charlottesville. The U.S. president is not just about promoting divisions within America. He aspires to polarize the world.

On his side are some usual suspects, like the neo-fascist Golden Dawn movement in Greece, which called the right-wing protest a “dynamic demonstration against illegal immigration” by “American patriots.” Trump could also count on some surprising allies like Benjamin Netanyahu, who might ordinarily condemn the anti-Semitism of the right-wing protestors, but who feels it’s more important to line up with his friend in the White House. Also noticeably absent from expressions of outrage have been Trump’s erstwhile allies Russian President Vladimir Putin, Indian Prime Minister Narendra Modi, and Philippine President Rodrigo Duterte, all of whom are in the midst of their own homegrown manipulations of nationalism.

But in a sign that perhaps Trump has moved so far to the right that he is isolated even from the European far right, Florian Phillipot of France’s National Front declared after Charlottesville, “These were white supremacists and racists. They need to be condemned in very clear terms.”

When the neo-fascist National Front is more progressive than the president of the United States, then, yes, Washington, we have a problem.

The Real Face of America?

African Americans, particularly of the older generation, were not particularly surprised by the result of the 2016 presidential election. They remembered how openly racist America had been for most of its history, and they knew that these sentiments still lay close to the surface of public life. Obama was an exception, not the rule. Donald Trump, meanwhile, was the manifestation of all the ugliness that some white people continued to voice in the safety of their all-white enclaves and all the intolerance that other white people kept bottled up to maintain appearances in their more multicultural environments.

I have traveled to many countries where the American example of civil rights organizing and multicultural education are an inspiration. I sat in on a strategy session in 1995 for Roma eager to apply the lessons of the civil rights movement to their own struggle in Eastern Europe. I put together a conflict resolution training program in South Korea in 2000 that drew on decades of multicultural education in the United States.

The people I talked to overseas are not blind to the sordid history of the United States. But they also know that all countries have sordid histories. They prefer to extract from the American experience that which is most usable.

But when the White House now stands for the worst elements of human nature, it becomes all too easy to dismiss everything about the U.S. experience — just as the Supreme Court decision in the 2000 election could be seen as negating everything about the U.S. political tradition. America becomes Amerikkka, and all that is good is at risk of getting thrown out with the racist bathwater.

The radical right in Charlottesville doesn’t just want to maintain a particular statue or set of statues. It doesn’t just want to use the Trump presidency as the springboard for a more thoroughgoing transformation of U.S. society. It wants to eclipse on a global scale everything worthwhile in the American tradition.

With Charlottesville, the United States seemed to forfeit its right to participate in the effort to move the world ever so incrementally along the arc of justice. It’s now up to our social movements to rescue our reputation and bring us back into the fight for human rights globally. As the radical right pushes for disunion, we must keep our eyes on the prize of an ever more perfect union.