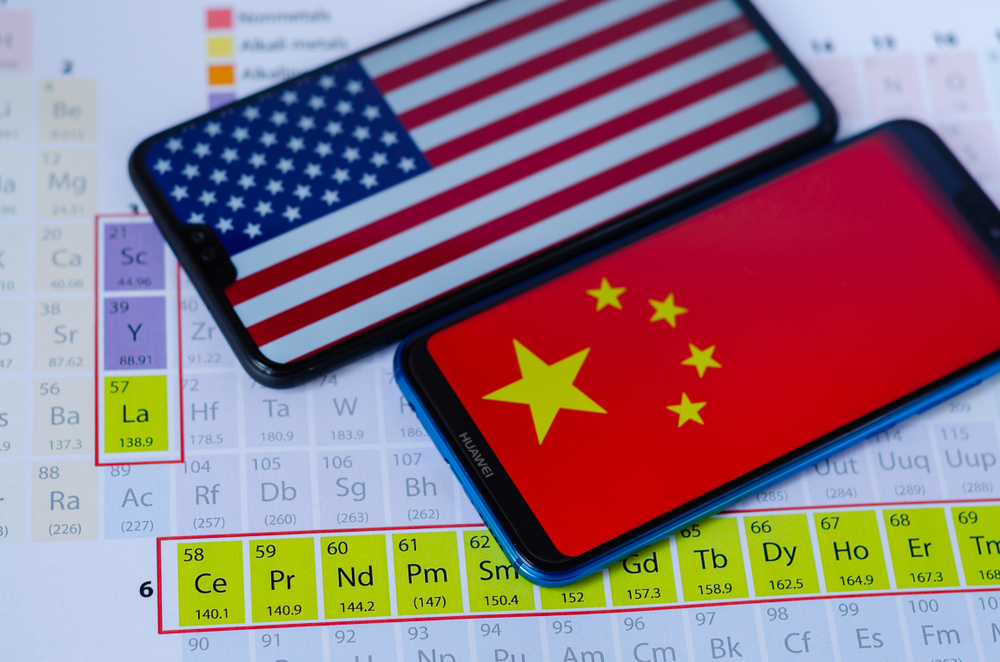 The United States is increasingly worried about China's near-monopoly on the mining and processing of these strategic minerals.
By Alec Dubro | June 14, 2022

The United States has a problem with rare earths, and it’s largely a problem of its own making. Ninety percent of these essential—but by no means rare—minerals are now under the control of China, a country that either is or isn’t our enemy. And the United States is largely responsible for this situation. Not so long ago, the United States was the world’s largest producer of rare earths until the private sector, with government acquiescence, decided to offshore the production.

In the eyes of the U.S. government and major manufacturers, it no longer made sense to acquire rare earths from a U.S. source subject to stringent environmental regulations. Instead, the hard business of extracting useful minerals was exported to other countries, where environmental damage was safely out of sight. China happily obliged, allowing environmental harm to proliferate so long as the costs of rare earth mining were kept down.

But buyer’s remorse set in quickly. As the U.S.-China relationship—never entirely smooth—soured in the twenty-first century, the realization that our entire tech industry was at the mercy of an authoritarian and sometimes capricious government set off reactions ranging from fear to anger. Since 2010, the United States and other countries have been searching for a way to replace these critically sourced strategic materials.

Rare earth elements (REE) are 17 chemically similar elements with magnetic and conductive properties. All 17 are adjacent to each other on the periodic table and all but one end in ium (Scandium, Neodymium, Lanthanum, etc.). They’re generally used in alloys and coatings, and the reason they’re in such high demand is that they’re astonishingly effective. With one notable exception (neodymium in magnets), they comprise no more than 0.1 to 5 percent by weight of finished materials. But even that can be a lot. For instance, about one kilogram of REE goes into the making of one electric vehicle, but without that kilo the car might not ever make it out of the production line. In any case, without REEs high tech materials and products would be a lot heavier and less efficient.

It’s no exaggeration to say that much modern technology could not exist without rare earths. To give just two more examples, according to “The Not-So-Rare Earth Elements,” by The Kleinman Center for Energy Policy: “Er-doped fiber (optical fiber with Europium added) has a huge gain bandwidth and is the ideal choice for amplifying multiple incoming data channels to different extents. REE-based phosphors are coated inside fluorescent light bulbs to apply color to the emitted light in a mechanism similar to solid state lasers.”

It’s also no exaggeration to say that obtaining REEs became highly politicized to the point of near armed conflict.

Story after story has sought to ascribe sinister motives to Chinese moves to efforts to restrict exports of rare earths. According to one headline, for instance, “China Maintains Dominance in Rare Earth Production,” which is not surprising since everybody gave them the means of production. Another headline proclaimed that “China Holding the World Hostage Over Rare-Earth Minerals,” but of course nobody’s stopping countries from sourcing elsewhere and processing it. Worst of all is this headline: “The New Opium War: China’s Rare Earth Minerals,” a breathtaking misuse of colonialist history.

But the signal event that pushed the panic into high mode occurred in 2010,  when Japan detained a fishing trawler captain “after his vessel collided with two Japanese coast guard vessels about 40 minutes apart as he tried to fish in waters controlled by Japan but long claimed by China.”

Although this move appeared to have originated with local officials, it was taken as almost a casus belli by Japan and the West. It quickly escalated into a series of threats and counter-threats, with China imposing a REE export ban on Japan. After Japan released the trawler captain and Beijing subsequently lifted the ban, the price of cerium had soared from around $5 per kilogram to $67 per kilogram. The dispute over China’s export restrictions moved to the World Trade Organization where China lost a case in 2014 brought by Japan, the United States and the EU.

But those events proved that China could indeed bring the West to an industrial halt. The fact that China depended as much on the West to purchase processed rare earths and to manufacture finished products didn’t deter the panic. Nevertheless, the West began a frantic effort to challenge China’s role in strategic rare earth production, which has accomplished surprisingly little in the past 12 years. China once controlled some 90 percent of the extracting and processing of REE. In 2019, it was 80 percent.

But the consumption of Chinese rare earths has in some cases significantly diminished: According to UN Comtrade data, “Japan slashed rare earth supplies from China from over 90% of imports to 58% within a decade.”

As the calls to divest from China continue, the search for replacement sources has become more strained. As University of Delaware professor of geography Julie Klinger has written, “The second decade of the twenty-first century saw campaigns to mine rare earths in the most forbidding of frontiers: in ecologically sensitive indigenous lands in the Amazon, in war-torn Afghanistan, in protected areas of Greenland, in the depths of the world’s oceans, and even on the Moon.”

But the issue isn’t really the location of REEs, it’s the processing of them. Although China is rich in rare earth ores, it’s estimated to have only one-third of them. Vietnam and Brazil combined have as much as China. And even if the United States itself doesn’t have a large percentage of the world’s reserves, North America has 14 percent.

Between 1965 and 1995 the Mountain Pass Mine, 53 miles southwest of Las Vegas, Nevada, supplied most of the global rare-earth market. The mine and processing there have gone through several owners and continues to operate, but at a much lower level. Motivated by fervent patriotism, fear of China, and nostalgia, Congress has mandated reopening Mountain Pass and expanding mining and processing within the United States and other locations outside of China.

On January 14, 2022, Senators Tom Cotton (R-AR) and Mark Kelly (D-AZ) introduced a bipartisan bill “to protect America from the threat of rare-earth element supply disruptions, encourage domestic production of those elements, and reduce [the United States’] reliance on China.” The act would also prohibit the use of rare earth metals processed or refined in China for any Pentagon contracts beginning in 2027.

The irony is that China has been moving in the opposite direction: to rid itself of mining because it’s an extremely dirty and destructive process. In Inner Mongolia, the site of China’s largest REE mine, the huge mining city of Baotou is adjacent to the equally huge and toxic artificial dump site called Baotou Lake.

Everybody wants rare earth elements. But nobody really wants to deal with the environmental consequences. Despite the strategic imperative, the U.S. government will find it quite challenging to return to a much dirtier past.