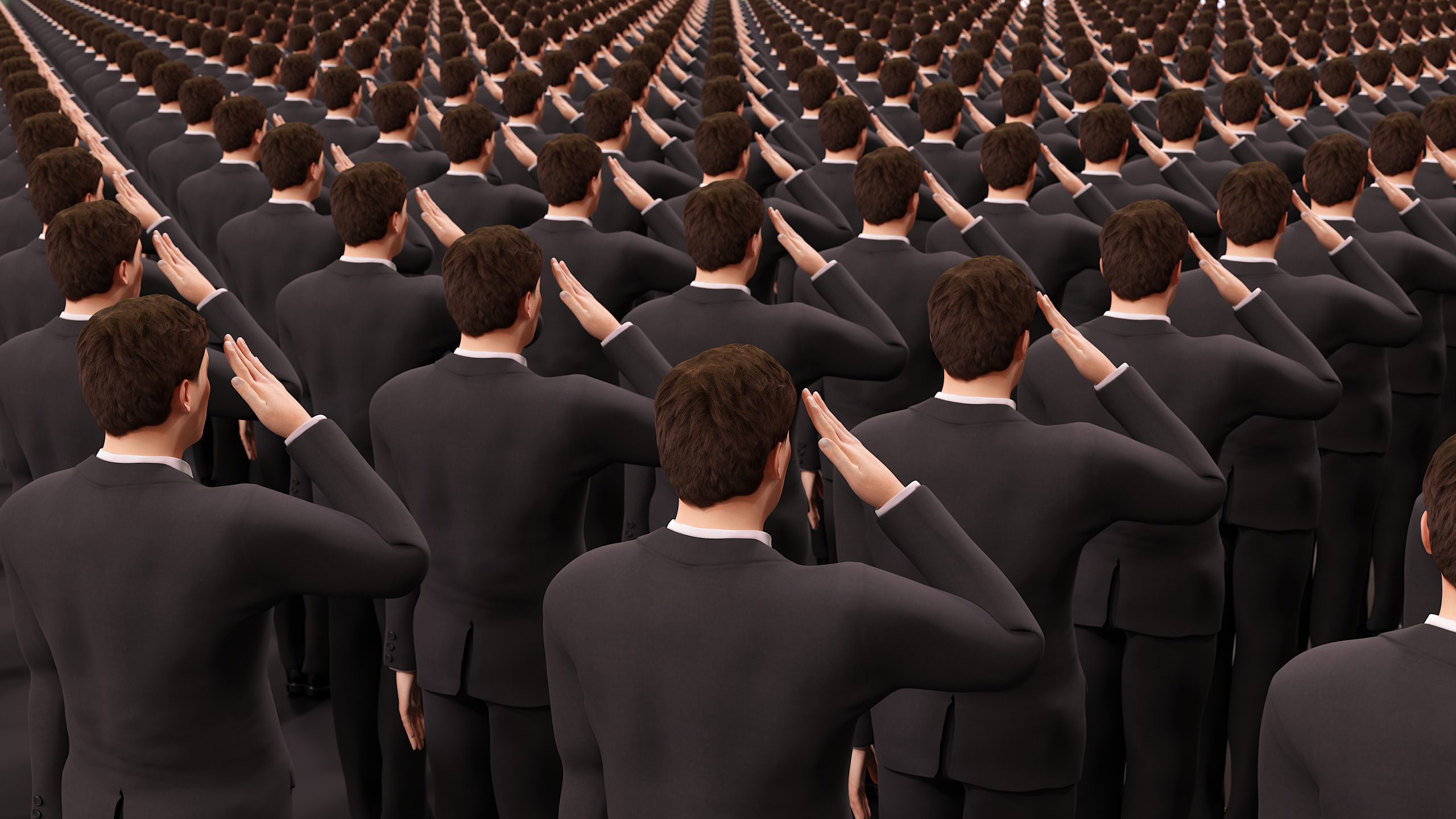 The Right Normalizes Fascism. The Best Response: Normalize It Back

Fascism is not just about violence. It's also about politics.
By David Ost | January 26, 2021

The problem with our public discussion of fascism is that we trot out the term every time the right turns to violence, and then we withdraw the term when the violence ends. We keep it in reserve, as if the force of the term is so immense that it can be used only sparingly.

Most recently, when right-wing mobs attacked the Capitol on January 6, once again people shouted “fascism!” Then, when the immediate threat died down, they prayed that perhaps this time, now that Joe Biden is president, things will go back to normal.

Normal? Such a reaction misses the major political development of the time: the normalization of fascism. For years now, the political right has been doing everything to make fascism unexceptional, imaginable, and part of everyday life.

The Tactics of the Right

Most of the time the right does not resort to violence. But neither did classic fascism. Fascists always turned on and off the violence. They won support and introduced their system not just through violence, which most of the population opposed, but by boasting loudly of their nationalism and patriotism and by taking steps, symbolic and real, to make things better, or at least make things feel better, for “real” Germans, Italians, Hungarians or Americans.

Before fascism can win power, it has to win support, which it seeks to do by polarizing politics to the point where only fascists represent the “true” nation. One way of doing so is to treat political opponents not as opponents but as enemies. Fascists denounce the free press also as enemies, and insist on the indisputable truth of their fantasies. They reject the legitimacy of any governmental administrations they do not control. They try to turn professional civil servants into partisan warriors. And they say they do all this in order to restore the power and dignity of some nebulous and mystical “Nation.” Although they interpret this notion in different ways, depending on the specific country and its history, their concept of “the Nation” always excludes large numbers of people actually living in the country, people who don’t share the racial or cultural identity of what fascists claim is the nation’s dominant essence. Fascists use this concept to build a “small solidarity” with those accepted as legitimate parts of the Nation and against all those others now considered a threat.

Violence follows from this. After all, if opponents really are enemies, if these enemies gain power, if they use that power against the interests of “the Nation,” then why shouldn’t patriots use violence? But violence isn’t necessary to spread these new authoritarian norms. The right does that without violence, by its rhetoric and practices. Nor is violence the thing that undoes democracy. Democracy breaks when its institutions are delegitimated and undermined, when a minority passing itself off as the “true” representative of the Nation claims its unique right to govern—just as the Republican Party, Hungary’s Fidesz Party, and Poland’s Law and Justice Party have been doing for years.

This is not “right-wing populism.” It is a fascist revival. We all seem to recognize this when they suddenly turn violent. But we need to be able to speak about fascism without waiting for the manifestation of violence.

One way to do that is this: with the new right normalizing fascism, we need to normalize it back.

Normalizing back means not shouting that there is a fascist threat the moment the right commits violence, but simply noting that this is what much of the political right has become. Make them take responsibility for what they represent. Make them defend themselves as fascists, as opponents of democracy who wish to smash the left. Don’t allow them to claim to be mere “populists.” “Populism” has connotations of representing everyone. Fascists do not represent everyone, and no far-right leader ever claims to do so. They are not “for the people.” They have an ideology, a longing for an authoritarian system that properly deals with the Nation’s enemies. This is what they are fighting for even when they are not committing violence.

Imagine that in 10-15 years those on the farthest corners of the right realize their authoritarian visions. Domestic troubles, perhaps triggered by a wave of climate refugees, allow some new Trump or Orban to impose martial law. Certain minorities are mercilessly harassed, their supporters targeted as aiding rebels. Imagine, in other words, that some version of a regime deemed “fascist” does in fact come to pass. (Given the recent insurrection waged on the flimsiest of grounds, with top Republicans urging election results to be simply thrown out, such a future can no longer be seen as impossible.) If it does, future historians will easily be able to show how such a development had its roots in the ideas and discourse the right is pushing today. Just as classic fascism had its ideological precursors in the anti-liberal and “irrationalist” theorists of the early 1900s, so the precursors of a future fascism are clearly the “right-wing populists” of today.

That is what it means to “normalize fascism back.” If they’re going to “normalize” fascism by insisting that lies are truth and liberalism is tyranny and that only their leaders are legitimate ones, we must normalize it back—not by shouting “fascism” as an epithet following moments of violence but by noting that these actors are promoting fascism through their everyday actions. We must not let them deny it any time they are not committing violence.

For two generations after World War II, no one could claim to promote openly racist and authoritarian ideas and hope to stay in politics for long. That is no longer the case. Fascist ideas are reemerging in the United States and in much of Europe. But the right tries to get off the hook by saying that it too opposes “fascism.” Fascism, after all, is associated with Hitler, and if they’re not acting like Hitler, then they can say—and many might even believe—that they cannot be fascists. This is why we must understand fascism not as constant violence and repression but as the mobilization of dominant-essence non-elites against minorities. Fascists seek popular support for a fight both against democracy and against the minorities democratic leaders allegedly protect.

Radical right leaders won’t change their views, but we might be able to reach some of their adherents who don’t like or want fascism, but who now don’t know they are supporting anything like that. Yelling “Fascism!” won’t reach them. They will simply line up behind their leaders who say “There the left goes, discrediting us.” If we calmly acknowledge that this is fascism—that it has, alas, become normal again, with legitimate and thus mainstream political actors espousing such views—then they might be able to listen. The point is to make the right defend its neo-fascism, and not let it deny all connection on the grounds that it is not being violent.

As it happens, some right-wingers won’t mind. Soon after Poland’s Law and Justice party came to power in 2015, a left-leaning journalist on a Polish television show pointed out some of the similarities of Law and Justice’s rhetoric to that of classic fascism. His right-wing interlocutor first squirmed, and then replied, “The problem is that Hitler gave fascism a bad name.” In other words, he recognized, honestly, that his program had much in common with fascism. He lamented, simply, that by declaring war on the world, and then losing, Hitler did much to discredit fascism. Pushed by a calm insistence that his favored party must admire fascism, the right-wing interlocutor confessed that it did.

It’s important to push these right-wing leaders and parties to acknowledge their fascist connections even as we acknowledge that they are not behaving like Hitler. By not being satisfied with seizing power only in Germany but embarking also on world conquest and a campaign of genocide, Hitler did give fascism “a bad name.” How else to account for the fact that a movement that had galvanized tens of millions suddenly counted virtually no open supporters after 1945? This is why those seeking to revive fascism today do not openly endorse violence: they know it deters potential supporters. (Violence was less of an impediment for fascist parties in the interwar period when citizens had just emerged from the full-scale militarization and pervasive violence of World War I and its trenches.)

Today, Trump-supporting talk radio hosts excuse the Capitol insurrection as being provoked by liberal refusal to “acknowledge” electoral corruption. But even they repeat ritually that “we do not support violence.” They, too, understand that Hitler gave fascism a bad name. They are comfortable with their neo-fascist efforts to overturn an election and hand power to their hero who lost. They just don’t want their neo-fascism to have a bad name.

Today’s fascists are not embarrassed by their attacks on democracy. They apologize for nothing, ever. They are only embarrassed by the label of “fascist.” Today, “fascism” is still a bad-enough name. Let’s insist they own the label, even at those times when they’re not inflicting violence. It might be the best way to impede their growth.

David Ost is currently a member of the Institute for Advanced Study in Princeton, working on a book project titled “Workers, The Fascist Allure, and the Transformation of the Left.” Normally he teaches politics at Hobart and William Smith Colleges in upstate New York. He has written widely on eastern Europe, with a focus on labor, class, democracy, and the new right. His books include Solidarity and the Politics of Anti-Politics, Workers After Workers’ States, The Defeat of Solidarity, and a special-issue edited collection titled “Class After Communism.” His articles have appeared in Politics and Society, Eastern European Politics and Society, Constellations, European Journal of Social Theory, Comparative Politics, Theory and Society, Perspectives on Politics, European Journal of Industrial Relations, The Nation, Dissent, Telos, and Tikkun.