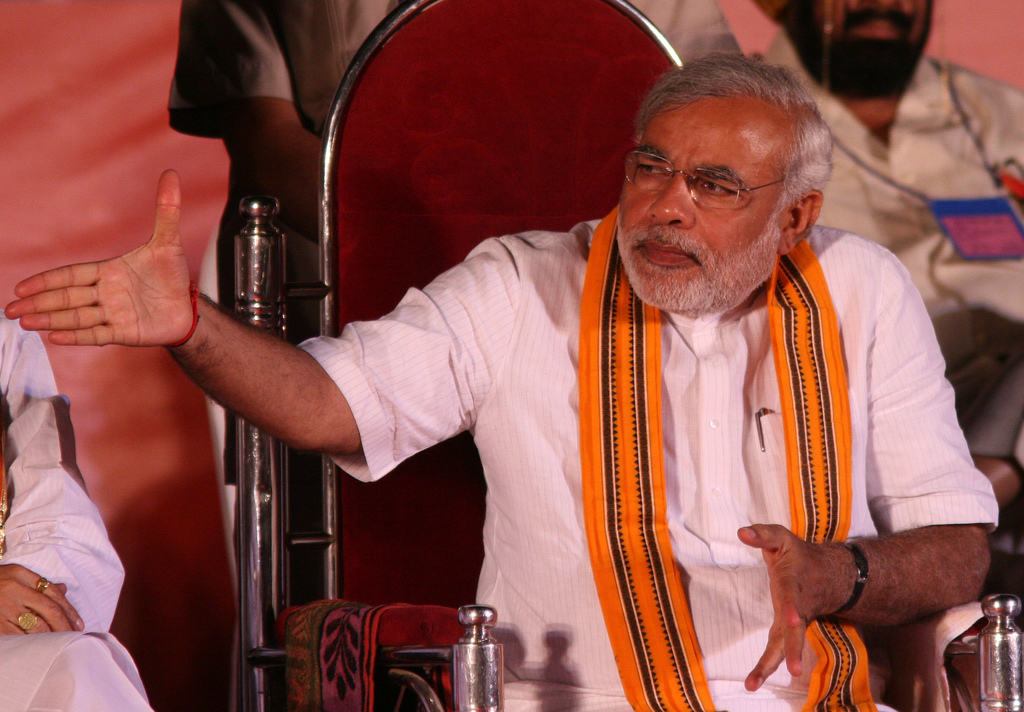 The Modi government's far-right bigotry is well-known, but its equally disturbing environmental record isn't.
By Basav Sen | May 24, 2019

The most pressing concern about the BJP government is its systematic persecution of India’s minorities, particularly Muslims.

A cloud of suspicion still hangs over Modi himself for his role in instigating, or at least tacitly endorsing, massacres of Muslims as chief minister in his home state of Gujarat. Modi failed to use the state law enforcement machinery to stop the 2002 pogrom, and systematically covered up the inaction.

Not unexpectedly, the Modi and the BJP’s ascent to national power in 2014 has had terrifying consequences for Muslims nationwide since then. Brutal mob killings of Muslims and Dalits (Hindus who are low in the caste hierarchy) in the name of “cow protection” have become common in India.

Hindus consider cows sacred, and most observant Hindus don’t eat beef — which, as a personal religious or dietary choice, is fine. But some states in the nominally secular country have legislated Hindu religious beliefs by banning the slaughter of cows and the sale and consumption of beef. Worse still, mobs of vigilante “cow protectors” have murdered Muslims suspected of killing cows or consuming beef. Dalits belonging to castes who have historically performed the work of disposing of dead animals have been murdered as well.

None of this should be surprising for a government and political party that have emerged from what many historians call a fascist movement that was inspired by European fascism of the 1920s and 30s — ties that they’ve never convincingly repudiated.

What’s even less known about the Modi government outside India is its abysmal environmental record. Under BJP rule, India’s ranking in the Environmental Performance Index — an assessment of countries’ performance on indicators of environmental health and ecosystem protection — has fallen to 177 (out of 180 countries examined), compared to 155 in 2014 under the prior government.

India’s prior governments have not had a stellar environmental record, but things have become dramatically worse under Modi.

A major focus of environmental struggle in India is around displacement of Adivasis (indigenous peoples) and rural farming communities from their traditional lands to make way for dams, mining, power plants, and other industrial infrastructure. These projects poison air and water, and are for the benefit of corporate interests. The people who are forcibly displaced almost always end up worse off than they were. And when they protest, they are often met with repression, which is sometimes justified using “national security” and “terrorism” as a pretext.

None of this started under the BJP. But they’ve not been content to merely continue the worst policies of prior governments — they’ve actively made things worse.

Since 1988, India’s forest policy paid lip service to protecting indigenous communities and ecosystems (even though it often didn’t work out that way in practice). In 2018, the BJP government proposed a policy change that eliminated language recognizing the rights of indigenous peoples, shifting the emphasis to facilitating growth of the timber industry.

The proposed policy change takes away control over decisions on forest projects from local communities, drawing condemnation from the International Work Group for Indigenous Affairs (IWGIA). The policy change has not been adopted yet, and hopefully social movements in India will be able to kill it before it gives sanction to the corporate plunder of indigenous lands.

Equally disturbing is the Modi government’s willful conflation of indigenous-led environmental protest with “terrorism” — another cynical ploy to serve corporate interests. It’s bad enough when any government does this. But it’s particularly chilling when it’s done by a government run by a party that’s credibly tied to fascism.

While indigenous peoples and other rural populations have borne the brunt of the Indian state’s environmental recklessness, urban populations aren’t faring much better. Half of the 50 most polluted cities worldwide are in India, and the Delhi metropolitan area, the nation’s capital, holds the dubious distinction of being the most polluted metro in the world (with Delhi and five key suburbs all in the top 12 polluted cities).

These pollution levels have severe health effects, particularly on children from poor families who often suffer from malnutrition and lack of adequate medical care to begin with. According to a 2017 study, there are an estimated 1.24 million deaths from air pollution in India annually.

Once again, the BJP government didn’t create India’s pollution problem. But they have not only failed to act, but also downplayed the seriousness of the situation to deflect attention from their inaction.

High-level corruption fuels many of these abuses. For instance, billionaire Gautam Adani, a native of Modi’s home state of Gujarat, enjoys close personal ties with Modi and has been a vocal political supporter. His company has in turn been a beneficiary of questionable land giveaways and other subsidies and waivers of regulations in Gujarat. Adani Group has a terrible environmental record, harming traditional fishing communities, indigenous peoples, and ecosystems from Gujarat to Australia.

This is just a microcosm of the horrific environmental and human rights record that the BJP government has accumulated in five short years. For those of us in the U.S. (and otherwise outside India’s borders), it’s important to remember that what happens in India doesn’t stay in India. On the most obvious level, India’s emissions of particulate matter and other pollutants can affect neighboring countries, and its emissions of greenhouse gases are bound to affect the whole world.

But there’s more to the story. India is the second most populous country in the world, with the seventh highest GDP in current dollars. Multinational corporations see India as an important market for consumer goods and an important source of goods and services. Today India enjoys the tenth highest foreign direct investment inflow of any country.

Consequently, media and politicians who support a corporate agenda are willing to turn a blind eye to the horrors of the Modi government.

Case in point: an egregiously bad New York Times op-ed (penned by an Obama administration insider) that completely ignores the Modi government’s terrible human rights abuses and celebrates its economic “reforms” — code for deregulation in the service of business. (In all fairness to the New York Times, they also published an editorial that tells truths about how the BJP has peddled hate and misinformation to win.)

The support for the Modi government in the service of global capital extends all the way to the top of political leadership in the U.S — and not only to President Trump, who shares Modi’s anti-Muslim animus. President Obama personally wrote a nauseating puff piece about Modi in Time as part of the magazine’s 100 Most Influential People series.

What this points to is the disturbing reality that resistance to the dangerous BJP agenda in India and worldwide will have to contend with a similarly widespread coalition of fascists and capitalists, including from parts of the “liberal” end of the political spectrum.

Indeed, the Modi government in India is part of an emerging worldwide wave of authoritarian ethnonationalist governments — in the U.S., Brazil, the Philippines, Hungary, and elsewhere. If we are to contain and counteract this trend, our global narrative and global resistance to these regimes must include India as one of its focal points.

Fortunately, the social movements of oppressed peoples in India — Adivasis, Dalits, Muslims, LGBTQ communities, women, farming and fishing communities, and others — are diverse, vibrant, and strong. As internationalist progressives, we owe it to them to provide our solidarity and support in what’s sure to be a hard struggle for the foreseeable future.