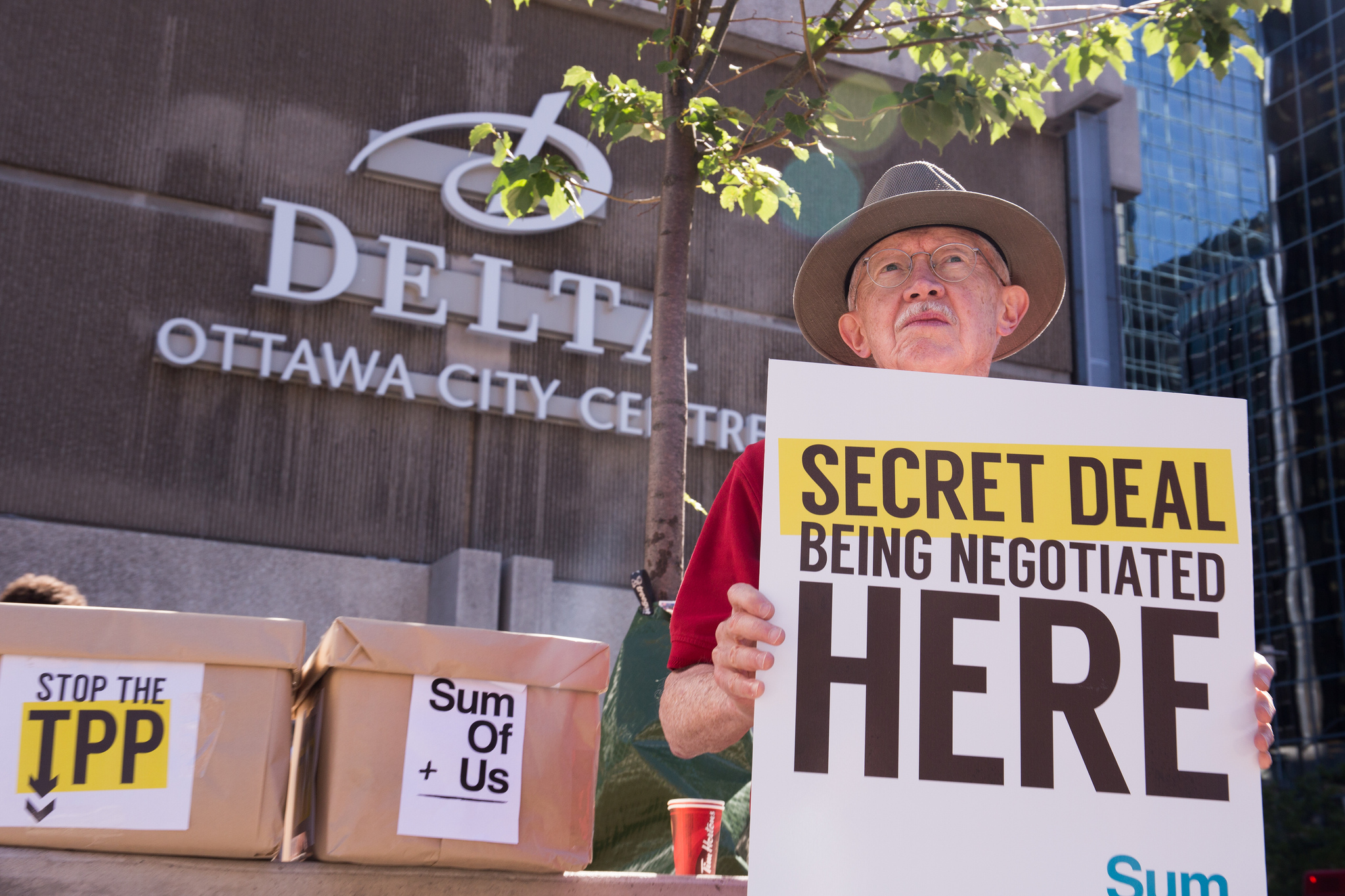 The TPP Can Still Be Stopped

The tide may be turning against the Obama administration's enormous, corporate-friendly investment pact. Is it too politically toxic for an election year?
By Arthur Stamoulis | October 19, 2015

Despite the best efforts of activists, public scholars, and countless others throughout the world, the U.S. and trade ministers from 11 other Pacific Rim nations announced recently that they’d reached a deal on the Trans-Pacific Partnership, or TPP — a massive new trade and investment pact that would set rules governing approximately 40 percent of the global economy.

Throughout the five-plus years of negotiations, U.S. trade officials have refused to tell the public — or even Congress — what they’ve been proposing in our names. Meanwhile, they have granted hundreds of corporate lobbyists — representing Wal-Mart, Chevron, and Cargill, and others — special “cleared advisor” status that gave them privileged access to negotiators and the texts.

Both the Obama administration and the Canadian government have hinted that the final text may eventually be released. Nonetheless, the public has been barred from reviewing any official proposals throughout the pact’s entire formative stages.

Despite the ongoing secrecy, we still know a fair amount about the TPP due to leaked documents and public admissions by negotiators. Most of what we’ve learned bodes poorly for the economy, public health, and the environment — both at home and abroad.

A Final Blow to the Middle Class?

Ever since the massive labor dislocations unleashed by NAFTA, the first anxieties over any trade agreement inevitably concern the possibility of lost jobs — particularly among the blue-collar workforce. And in terms of jobs and wages, United Steelworkers president Leo Gerard has warned, the “TPP may be the final blow to manufacturing in America.”

The TPP reportedly includes rules of origin for at least some critical products, such as automobiles, that are even weaker than the standards set by NAFTA, which itself was no prize for U.S. manufacturing. These rules would enable products assembled primarily from parts made in “third party” countries that are not subject to any TPP obligations, such as China, to enter the U.S. duty-free. (So much for the TPP being a bulwark against Chinese economic expansion.)

The TPP also includes investor-state dispute resolution provisions that make it safer — and, in fact, create incentives — for U.S. firms to offshore jobs to other countries, where they can operate under privileged “foreign investor” status to evade those countries’ regulatory policies and court systems.

Likewise, we know that the TPP includes procurement provisions that would effectively ban “Buy American” and “Buy Local” government purchasing preferences in certain circumstances, and that the TPP lacks the currency safeguards demanded by a bipartisan majority in Congress to prevent countries like Vietnam, Japan, and Malaysia from devaluing their currencies to gain a trade advantage over U.S. producers.

In addition to offshoring jobs and driving down wages, the TPP would also provide corporations with new tools for attacking environmental and consumer protections, while simultaneously increasing the export of climate-disrupting fossil fuels.

A Frontal Assault on the Environment

Beyond incentivizing offshoring, the TPP’s investor-state provisions would enable transnational corporations to challenge environmental laws, regulations, and court decisions in international tribunals that circumvent the U.S. judicial system — and any other country’s judicial system. That gives foreign corporations a powerful new tool to attack public safety regulations they claim impact their bottom line.

At the World Trade Organization, the United States has already lost cases pertaining to parts of the Clean Air Act, the Endangered Species Act, and the Marine Mammal Protection Act under similar “trade” provisions that grant this type of power to foreign governments. The TPP would go beyond the WTO by giving individual corporations, rather than governments, the power to initiate challenges.

A number of smaller free trade agreements and bilateral investment treaties already grant these powers to transnational corporations — and the results have been devastating. They’ve been used to attack clean air rules in Peru, mining laws in El Salvador, a provincial fracking moratorium in Canada, and a court decision against the oil giant Chevron in Ecuador, among many other examples.

Additionally, exports of fracked natural gas would be allowed to bypass certain environmental and economic reviews if they go to any of the TPP countries — including Japan, the world’s largest importer of natural gas. As such, the TPP could both increase energy costs for U.S. consumers and manufacturers, while simultaneously exposing Americans to the localized environmental consequences of fracking — and the world to increased global warming pollution.

This comes on top of trade-oriented provisions like tariff and quota reductions that could lead to further rip-and-ship resource extraction — such as logging, mining, and drilling — in some of the most pristine ecosystems left on earth. Greater access to sweatshop labor and lax environment enforcement overseas also effectively subsidize the production of short-lifecycle consumer products — including, particularly, consumer electronics — that contribute massively to e-waste and a throw-away consumer culture.

Friends of the Earth president Erich Pica puts it succinctly: “The TPP as a whole is a frontal assault on environmental and climate safeguards.”

If these substantial labor and environmental concerns weren’t enough, the TPP’s intellectual property provisions reduce access to life-saving generic medicines and undermine freedom on the Internet. The agreement likely sets ceilings, rather than a floor, on food safety and consumer “right to know” measures. And its financial services chapter is likely to handcuff effective regulation of Wall Street.

For years, TPP opponents in the United States set their hopes on stopping legislation that would give the White House “fast track” authority to circumvent congressional review of the TPP and other trade pacts. Fair trade activists argued that blocking this authority would yield an opportunity for lawmakers to fully debate the TPP, offer amendments, and use procedural mechanisms like the filibuster to halt objectionable provisions. They might even be able to kill the pact altogether.

Unfortunately, we lost that fight: Fast track legislation was signed into law this spring.

One rule, however, does require the Obama administration to give Congress at least 90 days notice from when negotiations are completed to when it signs the pact and submits implementing legislation to Congress for a vote. That means the TPP can’t be considered by Congress until the first months of 2016 at the earliest — the heart of presidential election season.

Already candidates Hillary Clinton, Bernie Sanders, and Martin O’Malley have spoken out against the TPP on the Democratic side. Just as significantly, Donald Trump, Ben Carson, Carly Fiorina, Ted Cruz, Mike Huckabee, and Rand Paul have done so on the Republican side. This, coupled with the fact that it’s also a congressional election year, may change the political calculus on the pact.

Fast track just squeaked through the House of Representatives by a 218–208 vote. With election year accountability politics, and potentially with access to actual TPP texts this time around, the broad, cross-sector coalition opposed to the pact has a better than expected shot of stopping it. The key will be making the TPP as politically toxic as possible over the weeks and months to come.

Arthur Stamoulis is the executive director of Citizens Trade Campaign (CTC), a U.S.-based coalition of labor, environmental, family farm, consumer, and faith organizations working together to improve international trade policy, and the first to publish leaked TPP texts. They’re online at www.citizenstrade.org and on Twitter at @citizenstrade.