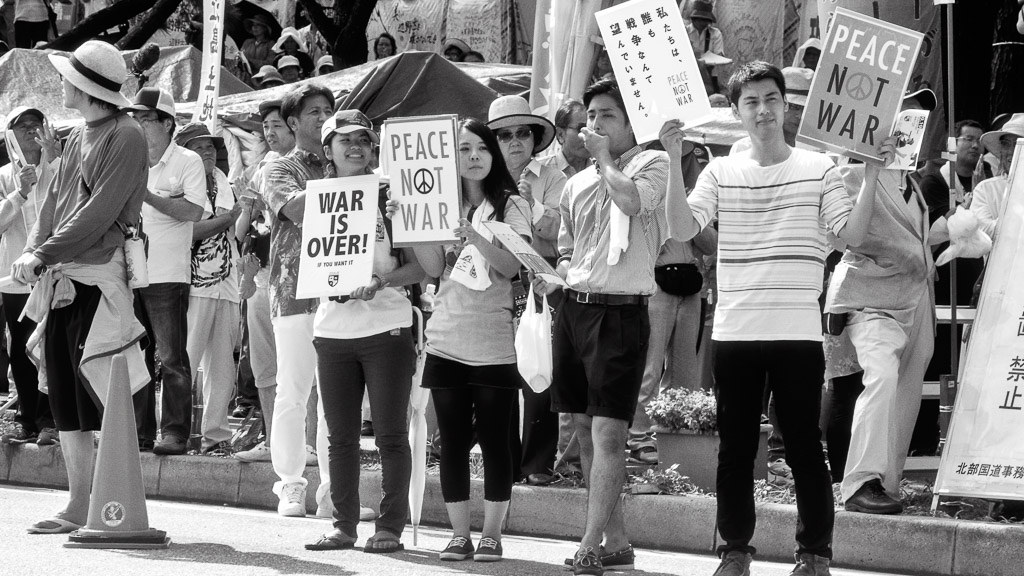 With its pacifist constitution (literally) beaten down into irrelevance, Japan is in the throes of an identity crisis.
By Nancy Snow | September 29, 2015

On a recent lazy Sunday, I strolled past Japan’s parliament and prime minister’s residence. It was eerily quiet.

The barriers were still up, but looking more like souvenirs too heavy to carry. The protesters — who’d gathered by the thousands in the preceding weeks — had disappeared. It was as if some Japanese version of H.G. Wells’ The War of the Worlds had sent them scurrying for cover.

That was when Japan turned its back on its greatest asset: peace and calm. In a debate marred by a physical brawl, Japan’s upper house advanced a measure that could permit the country to engage in offensive warfare under the guise of “collective defense” of its allies.

How did we get here?

You’d have to go back to last year. That’s when Prime Minister Shinzo Abe, the brand face of Japan, made it known that he was making good on an old threat to “update” Japan’s security laws — that is, to “reinterpret” Article 9, the famed “peace clause” of the Japanese constitution.

Normally that would require an amendment to the constitution. But Abe couldn’t be bothered with the constitutional process. The public be damned was his attitude, which got a few people upset — including one man who self-immolated one Sunday last year as crowds filmed the gruesome scene with their smart phones.

He survived. Another man died from self-immolation in November 2014. His body was discovered in Hibiya Park near the Kasumigaseki government district and Imperial Palace. It was reported that he’d left a suicide note directed at Abe in opposition to Japan’s proposed military law changes.

Someone should have explained to these men that the Japanese government doesn’t care about their views. If it did, we would have to presume that this is a representative democracy — which it isn’t — or more accurately, that this parliamentary democracy serves the interests of the nation, which it doesn’t.

The government here serves the interests of one dominant party that has all but ruled this nation since 1955, the year the United States — former war victor, seven-year occupier (1945-1952), and parent company — gave the teenager Japan the keys to the car. Those keys were handed over with an adult lecture on making sure that Japan would not be a fully democratic nation-state but would serve as a bulwark against Communism and the left. And that, kids, is how Japan’s ruling Liberal Democratic Party was born. (And it was sustained, subsequently, with generous allowance payments from the CIA throughout the Cold War.)

That moniker — “Liberal Democratic Party” — is akin to other misnomers in politics that put “democratic” in their public advertising. “Democratic” just sounds better than “one-party state.” Ask any Japanese voter if the party has any threat to its sustainability.

No, don’t ask, because Shinzo Abe just won reelection as LDP president. That all but assures he’ll remain prime minister for several more years, thereby sustaining his power and a false sense of established order. This in a country that just experienced a whole summer of protests, culminating in actual fisticuffs in its House of Councillors. As I was told a mere few months ago, the plan was always just to wait out the summer and be done with it.

The former Axis power’s pacifist constitution is not unlike the constitutional pacifism of other former Axis powers like Italy and Germany. But Japan has been the most effective at branding itself with its “peaceful Japan, beautiful Japan” image, which is probably why so many workaday Japanese — including students from some of Tokyo’s most prestigious universities — found themselves carrying signs with Abe’s image morphed to look like Germany’s former war chancellor.

The great worry here is that trouble is just around the bend with possibilities for lethal force and intervention. Put aside for a moment that China, which was devastated by imperial Japan and where resentment over wartime atrocities remains palpable, is upset about it. That’s to be expected.

The majority of the Japanese people who opposed these changes — at least 56 percent of them, according to one poll — who maybe thought for a fleeting moment that there was such a thing as public opinion shaping policy, are having a national identity crisis. Their Self-Defense Forces have an untarnished non-lethal record, functioning more like the UN’s blue helmet do-gooder responders in humanitarian crises. When you think of global intervention in Japan, you think Madame Sadako Ogata, the famous former head of the UN High Commission for Refugees. There’s no post-World War II precedent in Japan for foreign intervention that employs boots on the ground whose owners may come home in body bags.

This may explain why the week leading up to the vote was so surreal.

The day before the new laws went into effect, I was at the United Nations University in Tokyo to celebrate the unveiling of the digital archives that celebrate what will be the 60th anniversary next year of Japan’s membership in the United Nations. Imagine a nation that was a recipient of UNICEF aid into the 1950s becoming one of the UN’s most committed members, serving 10 times as a non-permanent member of the Security Council, with its 11th term to begin January 2016.

The 88-years-young Dr. Ogata was among the honorees present, and I had a chance to converse with her about my book on Japan’s struggle to globalize. What I really wanted to ask her was how she felt about the new security laws that would forever alter Japan’s pacifist nation brand. Of course I didn’t ask, because the laws hadn’t yet been passed then, and I’ve learned that one generally doesn’t exchange political views in polite public society in Japan for risk of creating conflict.

It’s a puzzle how Japan will now reconcile its 70-year legacy of neutrality and pacifism with this “new normal” of possible foreign military intervention alongside its closest ally, the United States — which, under the Obama administration’s “pivot to Asia,” has cheered Japan’s re-militarization.

Indeed, while the U.S.-based Japan shadow government welcomed this reinterpretation of Japan’s Peace Constitution, the U.S. public was unaware, and the U.S. media largely ignored the political twist. For those of us living inside Tokyo’s Inner Moat — Japan’s version of “inside the Beltway” — we are sure of one thing: The glass is more than half empty on Shinzo Abe’s political capital, but given the rigged system in place to shore up his power, the disconnect between nation and state will widen.

The day’s sunshine led to a cooling sunset that signaled autumn. The following day, September 21st, marked “Respect for the Aged Day,” beginning a three-day holiday known as Silver Week — a nod to the silver hairs dotting this aging society. But there was no rest for those wary of what just happened to Japan in the most disrespectful and undemocratic manner.

Whatever one thinks about updating Japan’s constitution vis-à-vis a rising China or other perceived global threats, the process of passing these laws under the cloak of night has been most damaging to the “Nice Japan” nation brand.

Nancy Snow is an international relations scholar, speaker, and writer based part-time in Tokyo, Japan. She is professor emeritus at California State University, Fullerton, and a former Abe Fellow and Visiting Professor at Keio University in Tokyo (2013-2015). She’s currently a public affairs, public diplomacy, and media relations adviser at Langley Esquire in Tokyo, Japan.