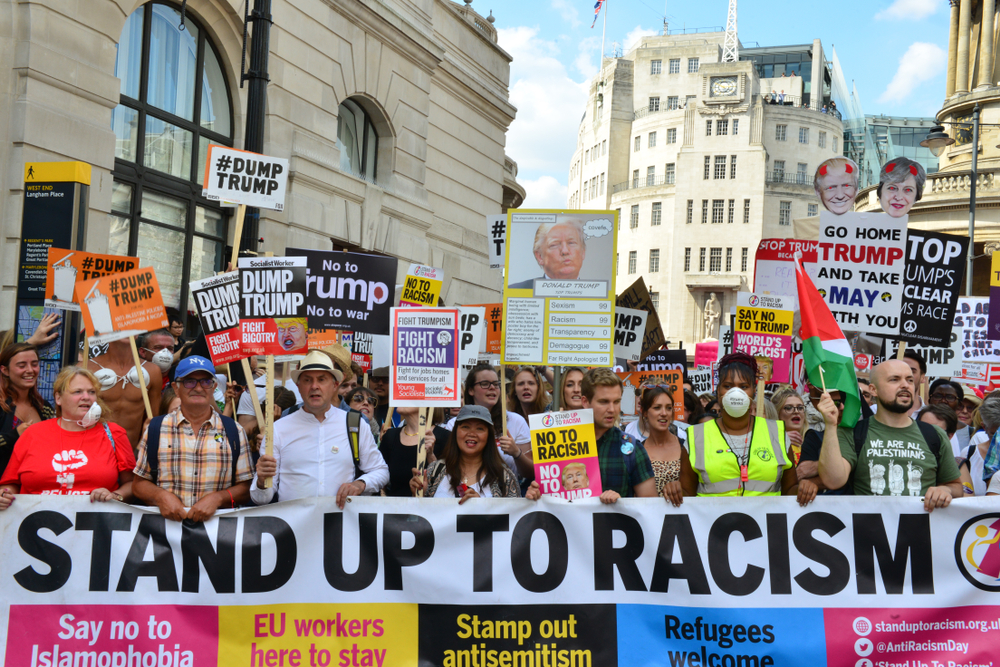 On the eve of his recent visit to the UK, Donald Trump described the country as being in “turmoil.” And at one end of the political spectrum there was turmoil aplenty, with a slew of high-profile ministerial resignations from the Conservative government following the publication of its long-awaited plan for leaving the European Union, referred to as Brexit.

But in other political quarters, Trump’s visit also proved to be something of a unifying force. Anti-Trump protests sprouted up across Britain drawing tens of thousands, while a huge march in London numbered around a quarter of a million, making it the largest UK protest since over a million people demonstrated against the U.S. invasion of Iraq in 2003.

The London protest reveals another side to Trump’s transatlantic impact — alongside the more visible boost his election has given to authoritarian populist movements across Europe and beyond.

Without a doubt, the Trump presidency has super-charged extreme right-wing forces across the continent by supporting and normalizing political positions long considered unacceptable in democratic societies. His vocal attacks on human rights, legal norms, social welfare, and his cynical demonization of migrants, Muslims, and people of color, has given permission for ultra-nationalist governments to undermine constitutional safeguards and pursue very public forms of discrimination. Examples include Hungary’s proposal to criminalize aid to migrants, Italy’s ominous registration of Roma and Sinti people, and Poland’s purge of Supreme Court judges.

Perhaps most pervasively, Trump’s denial of empirical evidence and his open and repeated recourse to racism, personal insults, and sneering have helped to export the corrosion of public discourse that has been a growing feature of American political life since the 1990s.

However, if Trump’s aggressive style and populist impulses have encouraged his political soulmates abroad, they have also provoked a backlash in defense of democratic norms. And in the case of Brexit, they have also harmed the very project that Trump wants to endorse.

The Politics of Resisting Trump in Britain

The anti-Trump protest in London on July 13 belied the media focus on the Trump Baby Blimp, a 20-foot high balloon that unflatteringly depicts the President as a lurid-orange infant with a pouting face and tiny hands. While some of the more humorous signs did make fun of Trump personally, the overall tone of the protest was in fact neither personal nor trivializing but displayed real political sophistication.

Like other populations around the globe, British audiences on average tend to be much better informed about American politics than most Americans are about other countries, in part because the U.S. remains the sole global superpower but also because of the comparatively superficial and restricted focus of much mainstream American media.

In London, demonstrators expressed concern over the future of the Supreme Court and judicial appointments, abortion rights, the treatment of migrants, the political exploitation of xenophobia and racism, the fate of Palestine after the relocation of the U.S. embassy to Jerusalem, the administration’s sexist, homophobic, and transphobic rhetoric, and the prospect of “tactical” nuclear weapons becoming a routine military tool. But perhaps most striking was the refusal to see the source of these dangers as simply foreign or to project political blame outside the polity.

Quite the reverse. It was not simply that the tone of the demonstration was resolutely not anti-American, but that in placards, banners, conversations, and in the speeches at the final rally, the march connected the political phenomenon represented by Trump with similar forces in Britain and Europe. As one protester commented, the march was not simply anti-Trump, but also anti-Brexit and firmly against the policies of British Prime Minister Theresa May.

Rather than prompting a kind of self-satisfied disgust at the faults of others, Trump’s visit to the UK has provided a powerful lens for interrogating the current state of British and European politics.

Where mainstream neoliberal politicians couch policies in pseudo-rationalizations and euphemisms, Trump’s swagger and aggressive rhetoric explicitly spells out their destructive and divisive intent. In Trump we’ve moved on from “dog-whistle” to an up-to-the-edge vocalization of hatred and stereotyping, often with only the thinnest veneer of plausible deniability.

While the Trump administration’s deliberate policy of separating and traumatizing migrant children and families has shocked people across the world, it served for the London marchers as a prism to view Britain’s own treatment of migrants. This year has seen the slow exposure of a toxic regime that erodes the human rights of migrants and asylum-seekers, a program described bureaucratically as creating a “hostile environment.” In reality, this policy has denied the citizenship of legal migrants from the Caribbean and contributed to increasing “racial discrimination and intolerance.”

While the UK’s “hostile environment” for migrants hasn’t reached the same levels of human rights abuse as the operation of ICE and the U.S. Border Patrol, the comparison is an important part of the dynamics of resistance generated by the transatlantic Trump effect. Explicit abuses in a polity that openly denies the human rights of others points to an equivalent moral failure in European polities that mouth the rhetoric of human rights while increasingly violating human rights norms.

British Prime Minister Theresa May’s invitation to Trump has fueled such comparisons. May has appeared especially craven and weak in pursuing her invitation in the face of a series of personal and national humiliations, including Trump’s leaking of intelligence information after the Manchester bombing, his withdrawal from the Iran nuclear deal, and his sharing of Islamophobic tweets by the right-wing extremist group Britain First.

That May so steadfastly pursued the visit has meant that her own policies and actions have become identified in public perception with Trump and Trumpism in ways she probably would never have wanted. On top of all this, its timing to coincide with the unveiling of her long-awaited plan for Brexit has generated levels of turmoil she can hardly have predicted.

American global leadership after World War II has operated through multilateralism — the building of alliances which, although ultimately dominated by the United States, nevertheless proceeded through negotiation and agreement between certain preferred nation-states. Privileged states, such as the big Western European economies, Japan, Canada, and Australia, were given a level of respect and co-decision, so long as the broad path of U.S.-oriented policy was accepted.

NATO is perhaps the most visible manifestation of this project. But just as significant, although less visible, was the economic coordination put in place by the Bretton Woods Agreement.

Since the end of the Cold War, the project of neoliberal globalization saw a deeper but less nation-state-directed mode of multilateralism as the path to corporate growth and profits. This new multilateralism involves a “sharing” or diminution of state sovereignty (over borders, regulations, labor relations, product standards, and macroeconomic policies) in ways that empowered corporations and disempowered traditional modes of political decision-making, such as legislatures, civil society associations, trade unions, and — most of all — electorates. NAFTA and the European Union (in its current form) are the more visible manifestations of this mode, although just as important but again less visible is the World Trade Organization (WTO) and the various new trade/investment regimes that are in the process of emerging.

While this kind of de-democratization and corporate ascendency has — perhaps unsurprisingly — led to stagnant real wages, employment precarity, and a diffuse sense of individual and communal disempowerment, popular dissatisfaction has not as yet coalesced around a project of re-democratization. Instead it has focused on the perceived threat to local and national identities associated with migration and population movement. The lived experience of neoliberal crisis has almost wholly come to be understood in terms of migration and cultural difference —  sometimes through an experience of cultural dislocation, but more widely through an increasingly powerful construction of loss and victimization.

Trump’s foreign policy, such as it is, exists in the maelstrom of these swirling vectors. Driven on the one hand by the emotional unpredictability of right-wing populism, on the other it is subject to a number of more directive forces — whether ideological or reflecting the realpolitik of particular corporate or national lobbies. This encourages a sense of free-floating recklessness, which means that any kind of humiliation, xenophobic insult, or transgression of multilateral policy norms that the president metes out is regarded as an unquestioned electoral home run. And indeed this may, at least in the short term, prove accurate.

At a deeper level, the calculation seems to be that there is an inbuilt advantage derived from breaking the reciprocal if asymmetrical compromises of multilateralism. Borrowing from neoliberal business culture, multilateral international agreements are now considered “deals.” And by analogy with asset-strippers and vulture funds, by reneging on those deals, the U.S. as sole superpower gets to redraw all relationships on ever more preferable terms. Or so Trump is told by a coterie of protectionist ideologues and state actors such as Israel and Saudi Arabia.

Thus, in the weeks before and during his visit to Europe, Trump threatened to withdraw from the WTO and NATO, while casting the EU as a “foe” in contrast to the friendly commercial competition between the U.S. and Russia. It appears that such antics have had little effect on the President’s domestic support, but the situation in Europe is far more complex.

One notable impact is the powerful impetus America’s unilateralism has given to the long-stalled project of a European defense force independent of NATO, and thus the United States. Ironically, even the UK, which traditionally blocked such a development in its capacity as unofficial American spoiler in the EU, has signed up to the project at the very moment of Brexit — a remarkable but neglected signal of the international sense of vulnerability and disorder which the Trump administration has generated so successfully.

It’s perhaps in the ongoing tragi-comedy of Brexit that Trump’s destructive impact is most telling. The British exit from the EU has been championed by Trump as a significant step in the unwinding of multilateral international institutions. But in an interview with a Rupert Murdoch-owned British tabloid given on the eve of his visit, Trump dismissed Prime Minister Theresa May’s newly minted Brexit plan, which still allowed for an element of multilateralism, and pointedly praised her rival for the top job, Boris Johnson, who had just resigned over the issue.

Despite subsequent half-denials, it appears that Trump is seeking to undermine May by pushing for a no-deal Brexit, a future in which the UK has no multilateral commercial, legal, or infrastructure links with the EU.

Yet what Trump does not seem to realize is how his own disrespect for multilateralism is sinking his preferred no-deal Brexit. A complete cutting of ties with the EU leaves the UK subject to trading on WTO rules — that is, within the more diffuse multilateral framework which the president has suggested bringing down. For even the most nativist and hardline Brexiteer, it is increasingly clear that such a “hard Brexit” will likely expose the UK to a ruthlessly unequal world of powerplay and always revocable “deals.”

There are limits to the exportability of Trump’s unilateralism — being unilateral, only the superpower gets to win. The correlation between Theresa May’s growing unpopularity and her humiliating subservience to Trump may provide a useful lesson to Europe. And it may just undermine the very no-deal Brexit that Trump so cavalierly seeks to bring about.

Graham MacPhee is a professor of English at West Chester University. He writes on British
identity, politics, and culture, and is the author most recently of Postwar British Literature and
Postcolonial Studies (Edinburgh University Press, 2011) and co-editor of Empire and After:
Englishness in Postcolonial Perspective (Berghahn, 2007).