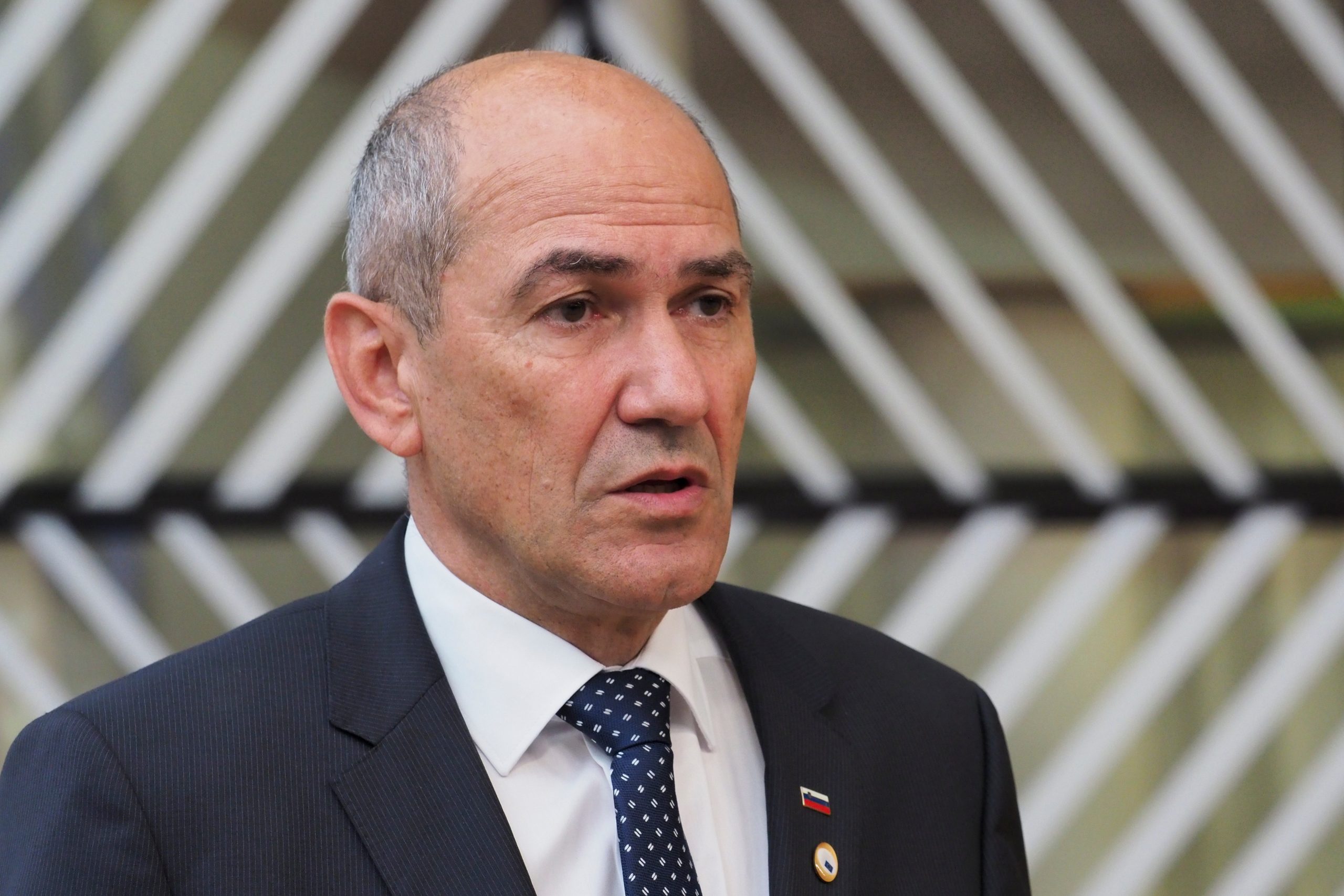 The Trump of Slovenia

Janez Jansa has steered one of the most liberal countries in East-Central Europe right off the road.
By Mira Oklobdzija | January 14, 2021

In a tweet on October 23, 2020, Slovenian Prime Minister Janez Janša wrote: “We respect difficult, tragic personal life of Joe Biden and some of his political achievements years ago. But today, if elected, he would be one of the weakest presidents in history, when a free world desperately needs STRONG US. Go, win, Donald Trump.”

On November 4, 2020, the day after the United States presidential election, he congratulated Donald Trump on his alleged re-election. At the beginning of January 2021, he still didn’t find it in his heart to correct himself. Only after Biden’s inauguration will Janša finally get around to congratulating the next U.S. president.

How did the leader of one of the most liberal countries of East-Central Europe become such a Trump fanboy?

Like that other top Trump supporter in the region, Hungary’s Viktor Orban, Janša was, once upon a time, a dissident. As a boy from the provinces, he joined League of Communists at the age of 17, rose to the position in the League of Socialist Youth, finished his university education, and then became an unorthodox critic of the army and the ruling system. Expelled from the Party in the 1980s, he became known as a vocal left-wing radical. Shortly after some of his articles appeared in the progressive magazine Mladina, his passport was withdrawn and jobs became scarce.

Gradually, with the first round of liberalization in Slovenia, his circumstances improved. Once again, his columns dealing with democracy and defense appeared in Mladina and he started to be omnipresent on the civil society scene, frequenting circles of pacifist and environmental movements. He also took an active part in discussions on constitutional changes and was mostly perceived by the dissident community as one of the “good guys.”

In 1988, Janša was arrested along with three others for allegedly possessing and revealing classified documents of the Yugoslav Peoples’ Army in what is known as the JBTZ affair. After a trial in military court with no legal defense for the accused, Janša was sentenced to 18 months in prison. Public protests escalated. The Committee for the Defense of Human Rights was formed  and became the largest grassroots civil society organization in Slovenia, gaining over 100,000 members within weeks. Janša was released after six months, having accrued a significant amount of political capital, which would come in handy later on.

His subsequent political career has had numerous ups and downs. He was one of the founders of the Slovenian Democratic Union in 1989 but in 1992 joined the Slovenia Democratic Party, of which he still holds the presidency. During the Slovenian war of independence, he was minister of defense and one of the main authors of Slovenia’s strategy against the Yugoslav Army. Finally, he has taken turns as prime minister (2004-2008, 2012-2013, 2020 to the present) and, in between, leader of the opposition. But he is equally well-known, at least locally, for his involvement in various controversies.

Janša has been accused of arms trafficking in violation of the UN arms embargo during the wars in Yugoslavia. In 1994, Janez Drnovseg dismissed him as defense minister for his involvement in an incident of mistreatment of an undercover police officer that Janša denied. In 2013, during his second mandate as prime minister, he was accused of corruption and sentenced to two years in prison. Janša called the proceedings politically motivated. After the dismissal of his appeal, he found himself in prison yet again. In 2014, he was temporarily released pending the review of the case by the Constitutional Court, which unanimously overturned the conviction in April 2015 due to “a large legal inconsistency in the process.” Janša was again elected as prime minister-designate on March 3, 2020.

Over time, Janša has increasingly been accused of political extremism but now of a right-wing nature. He is known, according to his ex-comrade Spomenka Hribar for his promptness of patriotic fervor and his creation of conspiracy theories. “Janša sees himself as more than an ‘ordinary’ hero: a God-chosen one whose job it is to change the Slovenian national character and history by stripping it of ‘weeds,’” she says. He is often called a “radical populist,” a “xenophobe,”  a “neo-fascist,” and an “autocrat.”. His open hostility and nationalistic rhetoric concerning immigrants is beyond dispute.

In these respects, he resembles his idol Donald Trump, his close buddy Viktor Orban, and their Dutch counterparts Thierry Baudet and Gert Wilders. Like them, his opinion about the European Union is very low. He once compared the EU to the Titanic. Nevertheless, Slovenia is slated to assume the presidency of the Council of the EU in the second half of 2021.

Janša has an equally low opinion of the media, and the feeling is mutual. Mladina stopped loving him a long time ago. Now, Janša is using social media to insult journalists and anybody who does not agree with him. He has been sued for defamation after labelling a journalist a “washed-up prostitute” in one tweet. In another, he suggested that press freedom advocates who had raised an alarm about his actions had been using cocaine. He also attacked the investigative journalist Blaž Zgaga, who criticized some government measures taken over coronavirus as unlawful, calling him “an escaped psychiatric patient suffering from ‘Covid-Marx/Lenin.’”

On the other hand, weekly antigovernmental protests have taken place in Ljubljana over the last year. Besides supporting individual journalists, protesters started to show sympathy for public television as well. Svetlana Slapšak takes part in them, as she did in 1988 to support Janša the dissident. “Public television doesn’t deserve admiration,” she says. “But the attacks against it are so obvious, crude and stupid that something has to be done. In danger, public television, usually benevolent towards Janša’s far right, begins to nurture an investigative approach and makes several key incursions into the government’s corruption stronghold.”

Nicknames are telling, and Janša has a few. His Trump-like addiction to Twitter and adoration of all things military gain him the first one, “Marshal Twito” (a reference to Yugoslav leader Josip Broz, better known as Marshal Tito). Another is “Prince of Darkness” as he was dubbed by former Prime Minister Janez Drnovšek some years ago, and which is in use again after his election in 2012 when he started purging the power structures of Slovenia.

“He understands the importance of controlling, as early as possible, all the levers of power,” Denis Romac wrote at the time in Novi List. “Once again, he applied the theory of the illustrious Chinese strategist according to which, to win a war, you must fool the enemy and you must appear strong even in moments of weakness. Janša is a faithful follower of the theories of General Sun Tzu, author of ‘The Art of War,’ a book he keeps by his bedside.”

Janša perceives his own citizens as enemies as well, always to be treated with caution, observed, and controlled, with the military if necessary. He made this clear in his address to the nation on March 19, 2020 when he announced his intention to empower the police “to give police powers to track quarantined people’s phones, use facial recognition and enter homes,” BBC reports. “But he’s been forced to give up these plans after the country’s information commissioner warned that Slovenia would become a ‘police state’ if he went ahead.” Following his speech, Marina Gržinić, a well-known Slovenian philosopher, artist, and activist, described him in an e-mail to her friends: “Janša looked like one of the Paraguay junta generals, in the time of the worst dictatorship.”

In 1919, Nobel Prize laureate Ivo Andrić published his “Story from Japan.” It tells about personal choices in the times of changing political circumstances through the tale of 350 men who rebel against a wicked empress and are expelled to a faraway island. Later, they manage to return, obtain power, and start to rule the country.

During the first general assembly, one of the former rebels, well-loved poet Mori Ipo, is not present. Instead he sends a letter:

Please forgive me for not being able to share with you the power as we shared the struggle. But the poets are – unlike other people – faithful only in trouble but abandon those who are well. We, the poets, are born to fight; we are passionate hunters, but we do not eat of prey. It is a fine and invisible barrier that separates me from you but isn’t the blade of the sword thin and yet deadly? Without harm to my soul, I cannot cross it because I can endure all but authority. That is why I am leaving you, comrades-conspirators… may you rule prudently and happily, but if any misery and temptation ever comes to our kingdom of Seven Islands and struggle and consolation are needed, please seek me.

Janez Janša returned from political exile to rule his country. But many of his compatriots now fervently wish that he followed the example of the poet and stayed away.