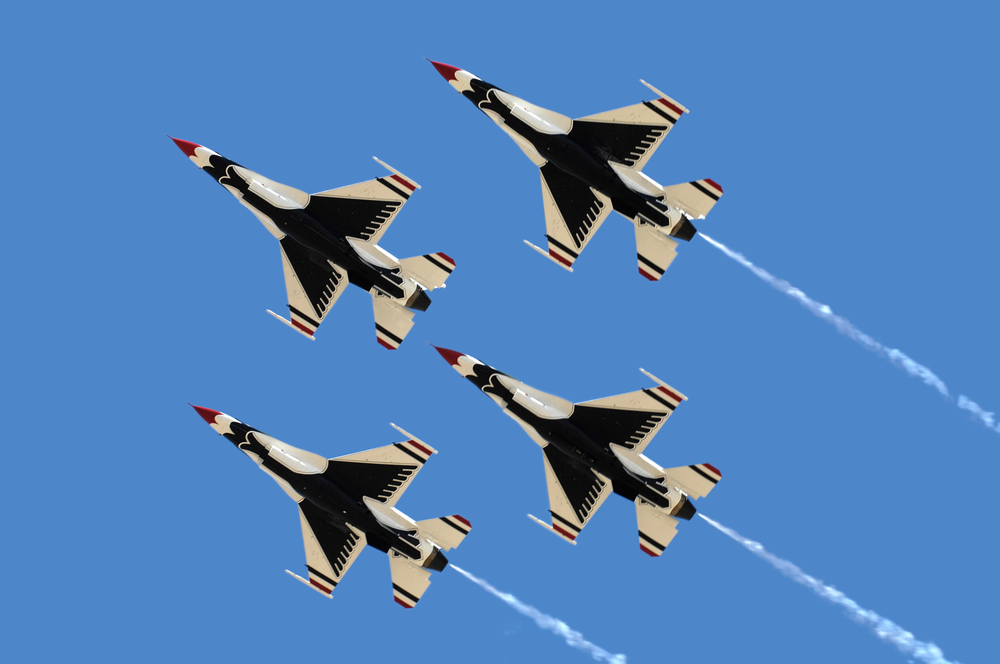 The U.S. Air Force is Preparing for a Great Power War Against Russia and China

The Air Force is undergoing its biggest expansion since the end of the Cold War, and the reasons are clear.
By Jakob Reimann | November 8, 2018

In September, at the Air Force Association’s annual Space & Cyber ​​Conference, Heather Wilson — Donald Trump’s Secretary of the U.S. Air Force — presented the Trump administration’s new roadmap for the U.S. Air Force: the historic expansion of the already, by far, largest air force in the world.

Wilson identified the perceived context of the new expansionist developments right at the start of her 30-minute speech — Russia conducted its largest military exercise on “Russian soil in four decades,” she said, and China sent its first operational aircraft carrier into the Pacific and has “militarized” the South China Sea — and thus exposed at the same time the old dilemma of global security policy: The one’s defense looks quite like offense to the other, and vice versa.

The largest expansion since the end of the Cold War

Secretary Wilson explained that the U.S. Air Force will expand its current operational squadrons — which she martially called “the clenched fist of American resolve” — from 312 to 386 between 2025 and 2030. That’s an increase of 25 percent — the largest expansion ever since the end of the Cold War.

A squadron consists of 12 to 24 aircraft. Wilson’s expansion thus corresponds to well over 1,000 new bombers, fighter jets, and drones, as well as reconnaissance and refueling aircraft. Approximately $25 billion will be added to the annual Air Force budget, and no less than 40,000 additional staff will be needed. That amounts to the Trump administration reversing recent trends, as the Air Force has “drastically downsized in past years,” Military.com reports.

Foreign Policy received exclusive insight into the composition of these 74 new squadrons. The largest percentage increase among the various squadrons is attributed to the bomber squadrons: aircraft that can be equipped with nuclear weapons and, above all, aim at the destruction of stationary targets such as buildings or other massive infrastructure — but not mobile combat units — which is largely interpreted as a shift in strategic focus towards wars against nations, not terrorist groups.

There is also a massive increase in the number of refueling aircraft, which are currently deployed in support of the Saudi-Emirati war against the civilian population of Yemen — an air war, waged across the endless deserts of the Arabian Peninsula, that would be virtually impossible without U.S. air-refueling.

Another central theme in Wilson‘s speech was the creation of a Space Force as the sixth branch of the military. Donald Trump initially understood that project as a joke, but then quickly recognized it as a catchy slogan that was well received by his base. In March, he finally included the Space Force into the national security strategy.

“Space is a war-fighting domain, just like the land, air, and sea”, Trump stated, although his White House, the U.S. Air Force, and Secretary of Defense James Mattis have vehemently opposed this move in the past. “We can no longer view space as a function, it is a war-fighting mission,” Air Force Secretary Heather Wilson told a crowd of applauding military staff in her speech in National Harbor, Maryland. The military, Wilson promised, is working to “put a war fighter’s focus on space operation.”

In recent years, NATO has carried out its largest troop deployment on its eastern flank — right at the Russian border — since the fading of the Cold War in the 1980s. At the insistence of German Defense Minister Ursula von der Leyen, a new NATO headquarters is being set up in Germany for the purpose of coordinating the movement of these troops. And with the establishment of the “Military Schengen” area, the rapid and unbureaucratic deployment of troops across Europe’s borders should be guaranteed.

In the wake of this escalating militarization of the European continent, the U.S. Air Force massively increased its presence at Russia’s doorstep too.

In all NATO countries in Eastern Europe, the U.S. Air Force is investing multimillion-dollar sums in the expansion of its air bases: with more than $50 million pouring into a base in Hungary, more than $60 million allocated to the modernization of two air force bases in Romania, and two bases in Slovakia that will be upgraded with more than $ 100 million, besides various base upgrades in other countries in the region.

The majority of these funds are dedicated to explicitly war-related investments such as new hangars for fighter jets or facilities to store weapons and fuel. In addition to hundreds of soldiers, the U.S. Air Force also recently sent several dozens of new fighter jets to Romania alone, including twelve A-10 Thunderbolts, better known as “Warthogs,” that are armed with radioactive uranium munitions. Reaper combat drones have been stationed in Poland for months, and soon they will likely launch from Romania too.

Both the excessive deployment of air forces in Eastern Europe and the establishment of Trump’s Space Force — as well as the historic, long-term upgrade of the U.S. Air Force as a whole — reflect a tendency to slowly abandon the infamous “War on Terror” doctrine of the past 17 years. The relevance of the countless petty wars against al-Qaeda, the Taliban, and ISIS & Co. is slowly dwindling. Neither is North Korea, Iran, or Syria the prime target of this strategic realignment.

The historic upgrade of the U.S. Air Force, military experts agree, reflects a shift in focus in the military doctrine of the U.S. empire towards great power wars in the 21st century: wars against Russia or China.

No hegemon besides me

It is one of the fundamental motives of strategic geopolitics that the present empire, in order to maintain its global power, must prevent the rise of other regional hegemons at any cost — especially in the three geostrategic core regions of East Asia, the Persian Gulf, and Europe.

This is the primary reason why the U.S. went to war against Nazi Germany and Imperial Japan — and transformed the latter into a military colony that still exists today and whose own army is still under Washington’s command. It’s why NATO functions as a U.S. tool for military control of Europe’s armies and the alliance ceaselessly moves eastward to Russia’s borders, why Saddam was overthrown and Iraq obliterated, why Saudi Arabia’s military was brought into vital dependency on the U.S., why the war against Iran is currently being prepared, and why the U.S. empire has deployed 240,000 troops in 172 countries around the world.

A rising China, as an empire in its infancy, however, is of a completely different caliber than the other wannabe-hegemons. Washington’s policy of containment may have a certain time-delaying effect, but ultimately it is irrelevant: China will become the regional hegemon in East Asia in the not-too-distant future, and eventually overtake the U.S. as the world’s primary superpower on the planet in the decades to come.

The 21st century is the Chinese one.

This transition can either go ahead peacefully — or with a big bang, potentially in the form of World War III. Secretary of the U.S. Air Force Heather Wilson once again made it clear in her recent keynote speech which scenario Washington is working towards.