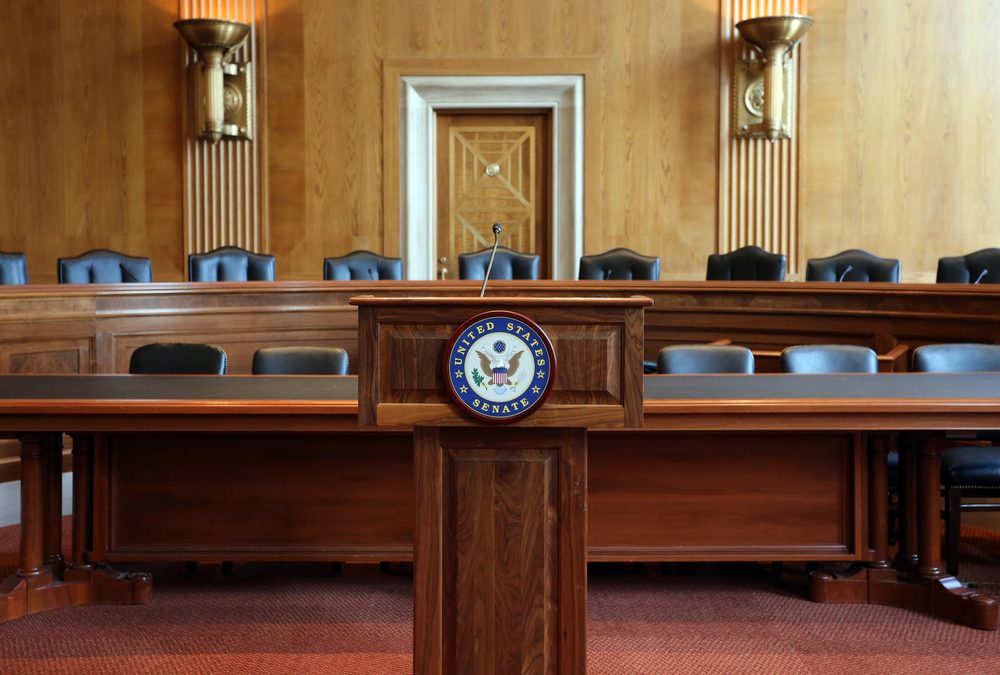 The U.S. Senate Is a Global Problem

The acquittal of Trump was bad, but the Senate's approach to foreign affairs over the years has been even worse.
By John Feffer | February 17, 2021

Watching the Senate conduct the second impeachment trial of Donald Trump brought back a flood of memories from high school.

I distinctly remember an earlier incarnation of those Trump-friendly Republican senators taking up their positions at the back of class to snicker, yawn ostentatiously, and otherwise disrupt the serious, well-researched presentations of their fellow students. Then, when it was their turn to present, the back-row rowdies were so embarrassingly unprepared that it was hard not to laugh in return.

The slavish devotion of the Senate miscreants to their imperiled leader and their casual dismissal of the January 6 violence, meanwhile, was like a modern-day replay of that grade-school classic The Lord of the Flies. In the Senate version, Trump played the part of the pig’s head, Josh Hawley was the pathological Jack, and Mitt Romney was the hopelessly conflicted Ralph who escaped the violence of the mob only thanks to the timely intervention of Officer Eugene Goodman, who stepped in at the last moment just like the British naval officer at the novel’s conclusion.

Finally, the acquittal of the former president was like the slap on the hand administered to one of my school’s handsome star athletes for one of his many transgressions. Boys will be boys, Trump will be Trump, and, alas, Mitch McConnell (R-KY) will be perpetually “a dour, sullen, and unsmiling political hack.”

The display of juvenile behavior during the Senate trial was nauseating, and the verdict was an embarrassment. But the Senate poses a much more serious problem than even this impeachment circus suggests.

When it comes to global issues, the Senate has been an enormous impediment to achieving peace, justice, and environmental sustainability. More so even than the U.S. president, the Senate has been the chief engine of American exceptionalism. It’s grimly fitting, then, that it has struck out twice in its duty to convict the supreme avatar of exceptionalism in modern American politics, a president who believed himself above democracy, above morality, and above the law.

Senators love to call their chamber the “world’s greatest deliberative body.” It’s where the most seasoned politicians, partially protected from the insane election cycle that their House counterparts must face, can mull over the most important issues of the days.

It’s also a glaring example of the inequities of U.S. democracy, with the two senators from Wyoming (population: 578,000) wielding the same power as the two senators from California (population: 39 million). Senate elections have tilted U.S. politics in favor of rural, predominantly white, and increasingly conservative voters by a factor of two or three over urban voters. Like the Electoral College, the Senate makes a mockery of the “one person one vote” principle by effectively giving some voters much greater power than others.

But the Senate is a far bigger problem because of its oversized role in shaping U.S. foreign policy.

Presidents have considerable leeway in conducting foreign policy, as the rollout of executive orders over the last years has made plain. Presidents can pull the country in and out of international bodies and multilateral agreements. They can slap tariffs on countries and sanctions on foreign individuals. Despite the limitations of the War Powers Act, they can still wage war for a full two months without any congressional interference.

But the Constitution gives the Senate the sole power to approve, by a two-thirds majority, any treaties that the United States might be considering. As with the filibuster, however, this treaty power has as much influence in its threatened use as in its actual deployment.

Consider the example of the Paris climate accords. The reason why all the national commitments to reduce carbon emissions are voluntary rather than mandatory is…the U.S. Senate. Secretary of State John Kerry, the U.S. negotiator in Paris, insisted on voluntary commitments because he knew that any mandatory requirements would need Senate approval. And the climate deniers in the Senate were sure to nix any such agreement.

The Iran nuclear deal is, similarly, an agreement, not a treaty. This distinction allowed the Obama administration to secure congressional support short of the two-thirds majority required for a treaty. The Joint Comprehensive Plan of Action (JCPOA) relies on various verification protocols to ensure compliance, not the signatures of the participating parties.

These workarounds are more the rule than the exception. According to one academic study, presidents negotiated nearly 4,000 executive agreements between 1977 and 1996 but only 300 treaties. Whether you consider these maneuvers to be an unacceptable short-circuiting of checks and balances or a reasonable method of overcoming the American exceptionalism of the Senate has largely depended on which side of the aisle you sit.

The Graveyard of International Cooperation

The Senate is where international treaties go to die. Currently awaiting the “advice and consent” of the body are 37 treaties, beginning with an International Labor Organization convention protecting the right to organize trade unions, which has been hanging out in the Senate for more than 70 years.

Or consider the UN Convention on the Law of the Seas (UNCLOS), which has been ratified by 162 countries. The United States participated in the international conferences in the 1970s that produced this critical document that covers all aspects of maritime borders, navigation, and commerce. U.S. negotiators under three successive administrations – Nixon, Ford, Carter – were instrumental in crafting the language of the working text. After the Reagan administration balked at some of the provisions, negotiators even amended the final version to reflect some of the U.S. concerns. But the Reagan administration still wouldn’t sign the agreement.

It would take the collapse of the Soviet Union, certain changes on the ground (actually, on the seabed), and a new administration (Clinton) to bring UNCLOS to the Senate. The late and decidedly not great Jessie Helms (R-NC) said no for he held fast to his position that no foreign entity should impinge on U.S. sovereignty. Lest you think this was a partisan issue, the George W. Bush administration subsequently pushed hard for the Senate to ratify the convention with the support of all living former legal advisers of the State Department. This time, despite the efforts of then-Senator Joe Biden, a different minority of hard-line Republicans including Jeff Sessions thwarted the bipartisan campaign.

The United States generally abides by this important convention, so what’s the big deal? As a non-signatory, however, the United States can’t participate in key commissions, such as the one on the limits of the continental shelf, where it could otherwise advance its interests or push a conservation agenda. If that irritates you, don’t send your letters of complaint to the United Nations. Send them to the Senate.

The Senate has been a crowded graveyard for arms control initiatives. There you can find gravestones for the Comprehensive Test Ban Treaty (CTBT), various nuclear-weapon-free zones, and the Arms Trade Treaty (which Trump dramatically unsigned in 2019). The CTBT has been signed by 185 countries but it won’t go into effect until eight specific nations ratify it (including the United States). The Arms Trade Treaty has entered into force, so it is only dead to the United States, which is problematic since America is the leading arms exporter in the world by a large margin. Resurrection of these treaties, is, of course, possible, but only if the composition of the Senate were to change dramatically.

The Senate also stands in the way of the United States participating in the strengthening of international law and the prosecuting of war criminals – by blocking ratification of the Rome Statute of the International Criminal Court.

The Senate stands in the way of preserving what remains of the world’s precious biodiversity – by blocking ratification of the Convention on Biological Diversity.

The Senate stands in the way of upholding the human rights of large swathes of the global population – by blocking treaties on disability rights, on the elimination of all forms of discrimination against women, and on a variety of labor rights.

The Senate is also not above exercising its power on seemingly trivial matters. It has refused, for instance, to support a treaty that protects albatrosses and petrels. Jeez, hasn’t anyone in the Senate read The Rime of the Ancient Mariner?

Of course, the Senate has displayed its remarkable intransigence in ways that go well beyond its advice-and-consent function on treaties. During the previous administration, among the 250 bills that the House passed and that Mitch McConnell blocked in the Senate were several immigration bills (the Dream Act, a measure to protect Venezuelans from deportation), several environmental bills (blocking drilling in the Arctic National Refuge, banning offshore drilling in the Eastern Gulf of Mexico), and a measure to provide visas to Kurds who supported U.S. forces in Syria.

Those who hope to reform the Senate have focused on changes to the rules. With the exception of certain bills, the threat of filibuster has made the Senate even less reflective of popular will by turning a simple majority into a 60-vote wall into which the Democrats are likely to crash into repeatedly over the next 2-4 years.

“Dear centrist Democrats, you couldn’t even get 10 GOP votes to convict the guy who sent a mob to kill you all. You think you can get them to vote on issues like immigration/climate? Come on,” immigrant rights activist Erika Andiola has tweeted. “You have to end the filibuster and use every tool at your disposal to get things done.”

It’s a good point, but why not think big? What about eliminating the Senate altogether?

Roughly half of the world’s sovereign nations have only one legislative body. Plenty of these unicameral systems are democratic including Costa Rica, Denmark, Greece, South Korea, New Zealand, and Norway.

Yes, I know, the smaller U.S. states would put up even more resistance to the elimination of the Senate than they have to the proposed elimination of the Electoral College. Such an upending of the finely balanced compromises of the Founding Fathers would generate yowls of protest from constitutional literalists. Who could ever contemplate such a radical amendment?

In 1911, the Wisconsin congressman introduced a resolution in the House to abolish the Senate. Berger was also the first socialist elected to Congress, so he was accustomed to taking contrarian positions. His proposed amendment to the Constitution began thus:

Whereas the Senate in particular has become an obstructive and useless body, a menace to the liberties of the people, and an obstacle to social growth; a body, many of the Members of which are representatives neither of a State nor of its people, but solely of certain predatory combinations, and a body which, by reason of the corruption often attending the election of its Members, has furnished the gravest public scandals in the history of the nation…

Those public scandals have continued all the way up to last weekend’s acquittal of a rogue president. Oh, Victor Berger, who will take up your mantle today?