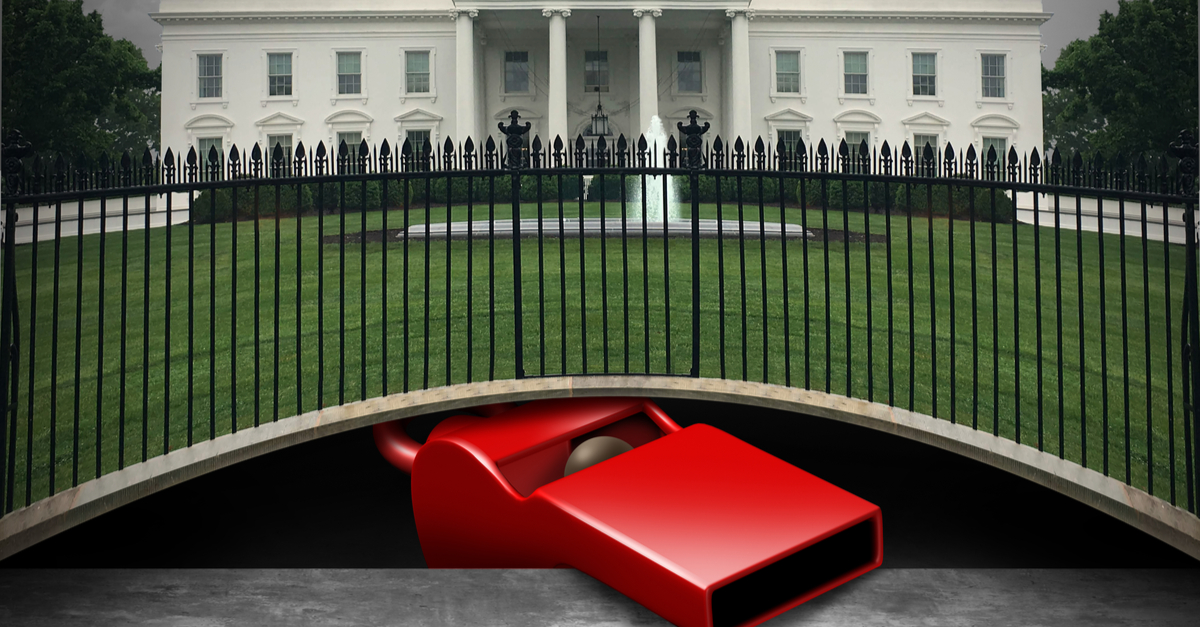 This moment should spark a conversation about the place of national security whistleblowing in a democratic society.
By Hannah Gurman, Kaeten Mistry | October 17, 2019

“We must determine the whistleblower’s identity,” tweeted Donald Trump, who has become obsessed with finding and punishing the individual(s) that blew the whistle on the president’s dealings with Ukraine.

“Our primary interest right now is making sure that…they are protected,” responded Adam Schiff (D-CA) on Face the Nation, noting that two whistleblowers had now come forward from within the intelligence community to expose Trump’s phone call with his Ukrainian counterpart.

The ongoing public battle between Trump and Schiff, who chairs the House Intelligence Committee, is part of an escalating war between Democrats and Republicans over the Ukraine whistleblowers. While Democrats hail the whistleblowers’ bravery, Republicans accuse them of espionage and treason.

We are entering an age of partisan whistleblowing, in which whistleblowers are legitimized and judged kindly when their disclosures advantage one party over the other.

The partisan treatment of whistleblowers is new. Until now, congress has joined with the executive to wage a bipartisan war on all public interest whistleblowing. With politicians and pundits fixated on impeachment and democracy, what this moment portends for the future of whistleblowing and democracy has been largely ignored.

Who is a whistleblower?

Disclosures of national security information have always been controversial.

This pattern has played out with every episode of national security whistleblowing since the early 20th century, including high-profile public interest disclosures by Daniel Ellsberg and Edward Snowden.

In 2017, the twenty-six-year-old NSA contractor revealed intelligence analysis of Russian interference in the 2016 election to The Intercept. The Trump administration branded her a “leaker” and convicted her under the Espionage Act, with the longest sentence ever given to a whistleblower. The press briefly obsessed about her name and personality, before the news cycle moved on.

Winner had no advocates in Congress. The only ones who branded her a hero were whistleblowing watchdogs and advocacy groups.

So why the different treatment for the Ukraine whistleblowers?

In disclosing the contents of the phone call and efforts to hide the full transcript, the Ukraine whistleblowers are presented as organizational defenders, protecting the national interest against corrupt presidential behavior. This fits within deliberately narrow state definitions of whistleblowing against “waste, fraud, and abuse.”

Although Winner exposed the failure of the White House to address Russia’s election meddling, she did not use the right language, go through official channels, or conform to the image of a legitimate whistleblower.

Before now, Republicans and Democrats have come together to sanction, delegitimize, and prosecute anyone who discloses information related to national security.

“Snowden and his defenders claim that he is a whistleblower, but he isn’t,” said Schiff, only three years ago. “Most of the material he stole,” Schiff claimed, “has been of great value to America’s adversaries and those who mean to do America harm.”

These polarized political times have broken that bipartisan consensus. As attempts to investigate presidential behavior through establishment types like James Comey and Robert Mueller have failed, Democrats have looked to the Ukraine whistleblowers to build a case for dislodging Trump. And Republican have questioned whether these cases involve whistleblowing at all.

As the political trenches are dug, we should ask who defines national security whistleblowing and what protections whistleblowers actually receive.

Who are the gatekeepers?

The Ukraine whistleblowers have used internal reporting channels to deliver their complaints to the Inspector General of the intelligence community. These channels were designed to keep concerns within the executive branch away from congressional and public scrutiny.

The public typically never knows about these complaints. The first one only reached congress because Democratic members pressed acting director of national intelligence Joseph Maguire after his office deferred to the Justice Department’s Office of Legal Counsel and refused to pass it on.

Insider channels have failed to protect whistleblowers from retaliation.

In 2002, Thomas Drake, a senior NSA official used them to report waste and illegality in the “Trailblazer Project,” a massive secret surveillance program. Instead of protecting Drake, the insider channel became a tool of his undoing. The inspector general counsel passed documents to the FBI, which raided Drake’s home. When the Defense Department’s assistant investigator general advocated on behalf of Drake, he was fired.

In 2006, the Defense Department acting inspector general said it was a “misnomer” to call the existing legislation whistleblower protection statutes. A recent report on internal reporting channels found that one quarter of all inspector general employees and one third of all reprisal investigators said they feared reprisal.

While the Ukraine episode is hailed for its potential political impact, the most consequential cases of whistleblowing have historically involved insiders going directly to the press.

Ellsberg first went to The New York Times with the Pentagon Papers, and Snowden shared his disclosures with The Guardian and The Washington Post. These actions led to landmark Supreme Court rulings on the right to publish and the passage of the USA Freedom Act. They also prompted increased penalties for whistleblowers and for journalists reporting on national security.

The national security state and politicians should not be the sole gatekeepers of what information circulates in the public sphere. Instead of simply celebrating or condemning the new whistleblowers along party lines, this moment should spark a conversation about the place of national security whistleblowing in a democratic society.

Let’s not misread the rise of partisan support for whistleblowers as a sign of progress. National security whistleblowing predated Trump, and it will survive his presidency. What happens when the next whistleblower’s revelations are hailed by Republicans against Democratic administrations?

Hannah Gurman is Clinical Associate Professor at New York University. Kaeten Mistry is Senior Lecturer at the University of East Anglia. They are lead researchers of the Blowing the Whistle project and coeditors of the forthcoming Whistleblowing Nation: The History of National Security Disclosures and the Cult of State Secrecy.