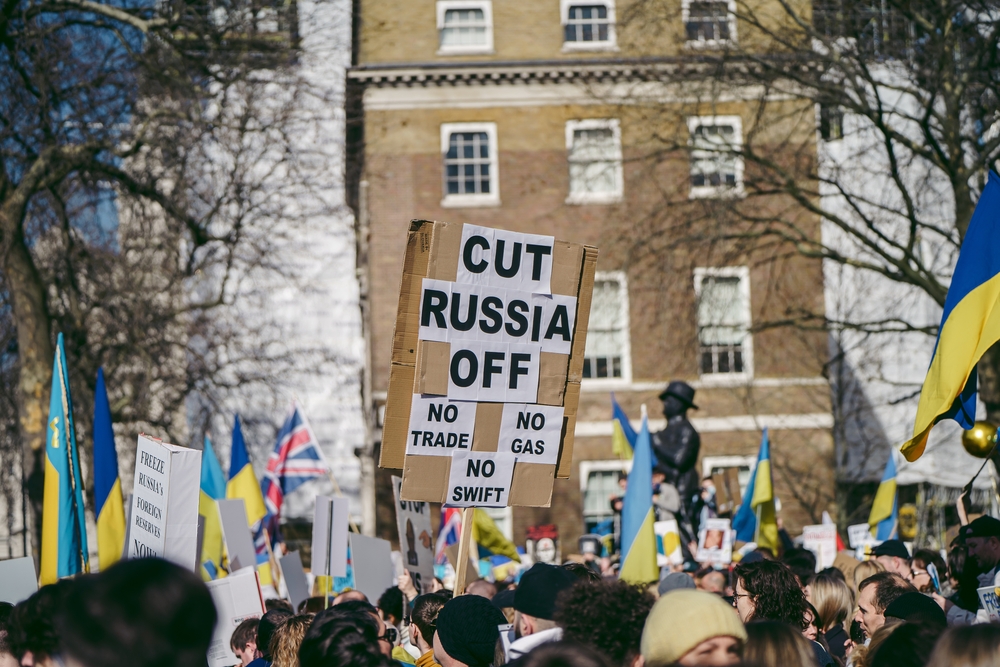 The Universality of Ukraine

The West is focused on Russia's war in Ukraine. Here's why the rest of the world should care as well.
By John Feffer | April 20, 2022

The Russian war in Ukraine has dominated headlines in the United States and Europe. It has been presented as a generation-defining event and as a pivot in geopolitics that will cleave world history into a before and an after just like September 11.

Much of the world, however, is not transfixed by developments in central Europe or even necessarily sympathetic to the plight of Ukraine. The five countries that opposed the UN resolution condemning the invasion are predictable: Russia, Belarus, North Korea, Eritrea, and Syria. But the 35 countries that abstained include some heavy hitters such as China, India, Iran, and South Africa. Virtually no countries in the Global South have signed onto the sanctions against Russia.

Some of those countries that hesitate rely on Russian military exports. Others are wary of jeopardizing trade relations with either Moscow or Beijing.

At MSBNC, Trita Parsi also notes that non-Western countries are tired of Western hypocrisy and skeptical of Western motivations in sanctioning Russia.

In conversations with diplomats and analysts from across Africa, Asia, the Middle East and Latin America, it was evident to me that these countries largely sympathize with the plight of the Ukrainian people and view Russia as the aggressor. But Western demands that they make costly sacrifices by cutting off economic ties with Russia to uphold a “rules-based order” have begotten an allergic reaction. That order hasn’t been rules-based; instead, it has allowed the U.S. to violate international law with impunity. The West’s messaging on Ukraine has taken its tone-deafness to a whole new level, and it is unlikely to win over the support of countries that have often experienced the worse sides of the international order.

In addition to their anger at Western hypocrisy, many in the Global South are understandably irritated about the disproportionate focus on the war crimes Russia is committing in Ukraine when so little attention has been paid to the bloody conflicts occurring elsewhere in the world, in Ethiopia, Myanmar, throughout the Middle East.

There is also a concern that Western military support for Ukraine is bringing the world closer to a global conflict, perhaps even to the point of a nuclear exchange that will have dire consequences for countries located far from the immediate battlefield.

These reasons for hesitation—in condemning Russia, in supporting sanctions, in rallying to Ukraine’s defense—are sensible.

They’re also largely beside the point.

The Problem of Hypocrisy

Russia has violated the sovereignty of another country. It has broken a tenet of international law that goes back several centuries. It has justified its invasion by claiming that its action is to prevent or preempt an attack on Russia. It has thus parroted the same reasoning the United States used to invade Iraq in 2003.

But Russia’s conduct in Ukraine should not be evaluated in comparison to U.S. actions in Afghanistan or Iraq. Rather, it must be judged according to international law. U.S. support for the government in Kyiv or its hypocrisy regarding past actions should play no role in how other countries view the situation in Ukraine. You might as well complain that France has no standing to criticize Russia because it invaded Prussia in 1870.

The same argument about standing is often heard around human rights, that countries like the United States can’t advance any claims—for instance, about torture—because of its own dodgy record. But the hypocrisy of a single country does not disqualify the multilateral system. The standard for comparison—such as Russian war crimes in Ukraine—is not the U.S. record on this issue but the body of international laws on human rights.

Rep. Ilhan Omar (D-MN) is doing just that. She has called for the United States to join the International Criminal Court. If Washington wants to put Vladimir Putin before a war crimes tribunal, it must be willing to have the same laws apply to U.S. soldiers and citizens.

Here’s a good rule of thumb. Don’t use the charge of double standards to avoid applying any standard at all. Rather, work to eliminate the double standard.

Impact of War on Global South

Many countries are unwilling to cross Russia because they are worried about the economic impact of sanctioning the Kremlin. Why should they make any sacrifices on behalf of upholding principles of international law that the Global North violates with impunity?

The unfortunate truth of the matter is that the Global South is already suffering as a result of Russia’s invasion, whether they participate in the sanctions regime or not.

In March, food prices hit an all-time high. That’s no surprise since Russia and Ukraine together account for 30 percent of wheat exports and 20 percent of maize exports. Ukraine actually had an excellent harvest last year, but it can’t easily get grain stores to market without access to shipping from Black Sea ports surrounded by Russian gunships.

Much of food production globally relies on fossil fuels for the production of fertilizer and the maintenance of mechanized machinery like tractors. Even if a country grows its own food and doesn’t import wheat from Ukraine or Russia, its capacity to feed its own population is being hit hard by rising energy costs.

All of this should focus anger on Russia, not only for the suffering imposed on Ukrainians but the hardships everyone around the world is experiencing because of the surge in prices. If sanctions can speed the end of the conflict—by disrupting Russia’s war effort—it is in the economic self-interest of virtually all countries to support them.

Few people outside the Kremlin want to see the war in Ukraine continue. And no one wants peace more than the Ukrainian people who continue to suffer from Russian attacks.

But there is a misconception that the Ukrainians are refusing to compromise, and that’s why the war continues.

Russia attacked Ukraine for no defensible reason. Ukraine, despite its military disadvantages, has fought back, achieving something of a stalemate. President Volodymyr Zelensky has offered support for various compromises, including neutrality.

But it is Vladimir Putin who refuses to end this war. Stymied in his attempts to seize Kyiv and other major cities, he has redirected his army to the east and the south in order to capture enough territory to demonstrate that his invasion was not in vain.

Ukraine could, in theory, cede this territory to the Russian military. That would be a bitter pill to swallow but the formula “land for peace” has sometimes worked in other places and times.

But territorial concessions wouldn’t guarantee an end to the war. Putin has declared that his goal is to “de-Nazify” Ukraine and unify the territories into the Russkie Mir (Russian world). Successful in incorporating the Donbas into Russian territory, he could refocus his attention on his initial plan to seize Kyiv.

Meanwhile, the seizure of territory has been a prelude to even worse scenarios. In a horrible echo of the internal deportations of the Stalinist era that targeted Poles, Tatars, and others, tens of thousands of Ukrainians have already been forcibly relocated within Russia, with as many as 100,000 slated for areas as far away as Siberia and the Arctic Circle. Putin’s allies have even suggested sending all Ukrainians to concentration camps to reeducate them so as to ensure loyalty to their new Russian overlords.

So, Ukrainians are fighting for their lives. Europe and the United States are supplying them with weapons to defend themselves, but they have been careful to do so in a way that does not bring NATO forces into direct conflict with the Russian military. The purpose of the arms transfers is precisely to prevent escalation and the widening of the war to areas outside of Ukraine.

I don’t subscribe to the idea that Russia is hell-bent on pushing north into the Baltics or west into Poland or Hungary. I don’t believe that stopping Russia in Ukraine is tantamount to halting the Ottoman armies outside the gates of Vienna in 1683.

But I also don’t believe that an arms embargo will end the current conflict. It will only end the lives of many, many Ukrainians—just as an arms embargo was essentially a death’s sentence for many Bosnians during the mid-1990s. I mistakenly supported an arms embargo during the Yugoslav wars, thinking that sending in weapons was comparable to adding fuel to a fire. The embargo did not help bring that conflict to an end (rather, it was the additional arms that enabled Croatia in 1995 to overcome Serbian military units in both Croatia and Bosnia).

During the Cold War, it was an unspoken agreement between Washington and Moscow—after the Cuban Missile Crisis—that proxy wars in the Third World would not carry with them the risk of nuclear confrontation. The war in Ukraine is different in that Russia is directly involved. But as long as NATO does not provide boots on the ground or planes in the air the two superpowers should agree (off-the-record, if necessary) to observe a similar protocol. A return to nuclear arms control negotiations should be part of any deal to end the war in Ukraine.

It would be absurd to expect the Global South to care about Ukraine the same way that Europe does. The very future of European security is at risk, and Ukrainian refugees are flooding Poland and Germany, not South Africa and Brazil.

Yes, the Global North is hypocritical. But that should be a call to arms, not a retreat into a fearful, cynical, and ultimately dangerous neutrality.