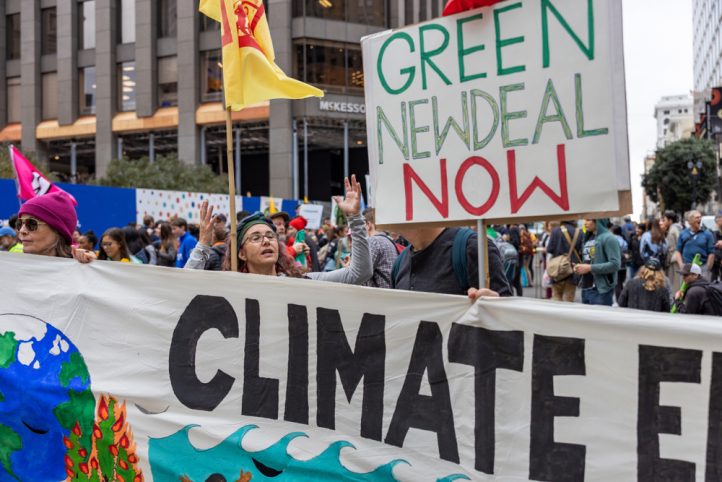 The global economy is collapsing. When the pandemic began, experts at the International Monetary Fund predicted that we would see the worst economic downturn since the Great Depression. This week, they announced that it will be even worse than they thought.

This disaster comes into a world already facing record inequality, desperate poverty, and a growing climate crisis. The COVID-19 pandemic has pushed a precarious world economy over the edge. This moment offers a rare opportunity to rethink the path that led us here and chart a new course out: a Global Green New Deal.

We have a tendency to treat the global economy as something natural — beyond our control. We understand that poverty, epidemics, and environmental destruction within the United States are not inevitable. There are certain rules in place that benefit some over others. People are not poor because they fail to lift themselves up by their bootstraps. People are poor because wages are too low, because we don’t invest in public goods, because the wealthy are too powerful.

The current rules are actually rather new. Born out of the financial crisis of the 1970s, these mirrored on the global level what Ronald Reagan and Margaret Thatcher were doing at home — crushing labor unions, slashing environmental protections, and empowering corporations.

The World Bank and International Monetary Fund lent recklessly to poor countries, saddling them with debt and imposing deregulation, austerity, and labor suppression. Trade agreements like the infamous NAFTA set corporations free to search the world for profits without added protection for workers or the environment. Nations were forced into a competitive “race to the bottom” in wages, taxes, and regulations in an attempt to lure desperately-needed investment. Multinational corporations began to outsource jobs to countries where wages were lower and environmental regulations lax — and outsource profits to a shadowy network of tax havens.

The suppression of worker power deepened inequality. The decimation of environmental standards fueled the climate crisis. Decades of budget-slashing left us all unprepared to confront a pandemic. The rules that govern the world economy were not inevitable. They were intentional, and they led us to where we are today.

To escape the global recession and build a more resilient world on the other side, we need to rewrite the rules. We need a system of trade that puts workers and the environment before corporate profits. We need enforceable global floors on wages, labor laws, and environmental protections. We need global coordination to end the scourge of tax havens, debt relief for countries in crisis, and massive global redistribution.

In short, we need a Global Green New Deal.

This ambitious agenda will be hard to achieve. But if there was ever a time for big change, it is now. It was after the devastation of World War II that the United Nations was born. It was from the recessions of the 1970’s that the latest world order emerged. It is out of a catastrophe as profound as COVID-19 that a new trail can be forged.

When Margaret Thatcher was setting the world on course to the present crisis, she had a slogan: “There is no alternative.” For too long, we believed it.

Now, there’s reason for the phrase to come back into use: There is no alternative. To rebuild the global economy, to prepare for the next pandemic, to confront the climate crisis, we have no choice: we need a Global Green New Deal.

Michael Galant is the Sr. Communications Associate at Win Without War and a coordinator of the Progressive International (views are his own). He can be found on Twitter at @michael_galant.