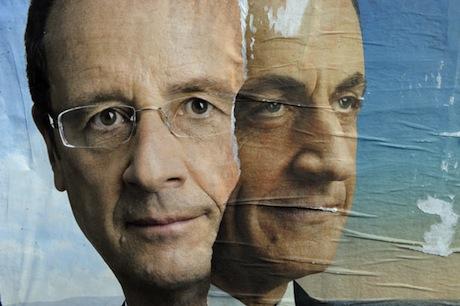 The End of Austerity in Europe?

A Hollande victory in France would tip the balance of power in Europe and put an end to the hegemony of the austerity paradigm.
By Jeanne Kay | May 4, 2012 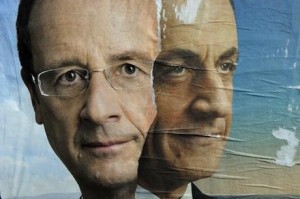 A few months ago, when Occupy movements bloomed across Europe, the absence of any similar uprising in France appeared to be an anomaly in a country infamous for its people’s propensity to take the streets. One explanation was that the presidential election was just around the corner, and that after 10 years out of government, the Left was capable of channeling the French people’s indignation into electoral gains. Indeed, the election’s big surprise was the spectacular surge of Jean-Luc Melenchon’s Front de Gauche (Leftist Front), a coalition of parties to the left of the traditional social-democratic PS (Socialist Party). With an Occupy-friendly platform, the Front went from virtual non-existence to a double-digit finish in the election’s first round, gathering crowds beyond President Nicolas Sarkozy’s wildest dreams throughout the campaign.

The Front de Gauche did not, however, make it to the second round. In France’s electoral tradition, voters are enjoined to follow their idealistic convictions in the first round of the election — where this year, 10 different candidates presented platforms with planks ranging from the abolition of the presidency to the conquest of Mars — with the certainty that two weeks later, they will come back to “real-world” politics and choose between the two main parties’ pragmatist candidates (and decide whether they would like a little bit more or a little bit less of the welfare state this time around).

This tradition of “voting with the heart” for the first round and “with the head” for the second was partially undermined 10 years ago, when PS candidate Lionel Jospin was overtaken by the National Front’s Jean-Marie Le Pen in the first round, prompting a nationwide mobilization to prevent the election of the far-right candidate and resulting in Jacques Chirac’s victory with 82 percent of the vote. Under the threat of a recurrence — what could be called “April 21st, 2002 post-traumatic stress syndrome” — many first-round French voters chose to vote for Socialist Party candidate Francois Hollande, despite a general lack of enthusiasm for his lukewarm social-democratic policies and his relatively dull campaign. As a result of what the French call le vote utile (the “useful vote,” as opposed to a vote of true allegiance), Hollande finished ahead in the first round, with 28.6 percent of the vote to Nicolas Sarkozy’s 27.2 percent.

Sarkozy is the first incumbent president in the history of the Fifth Republic not to come out on top in the first round. This humiliating result was expected, as the president beat records of unpopularity during his presidency, a result of his unpopular policies as much as his vulgar personal style. Marine Le Pen, daughter of Jean-Marie, managed to obtain the third-highest score of the first round, scoring 17.9 percent of the vote on a platform of economic protectionism, Europe-bashing, and anti-immigration policies. While she managed to appeal to a broader electorate by appearing less extreme than her father, the National Front remains an extreme-right party whose core project consists of creating an apartheid-like system in which France would recognize two classes of citizens: French and Non-French.

Sarkozy, in a desperate attempt to catch up with Hollande in the last two weeks of the campaign, promptly jumped aboard the National Front’s bandwagon, adopting not only its bogeymen — immigrants, open borders, radical Islam, etc. — but also a few last-minute policy proposals directly inspired by the far-right party. These include suspending the Schengen Accords (which allow for the free movement of persons inside the European Union) and instituting a “presumption of legitimate defense” — a “stand-your-ground”-like prerogative to protect policemen who shoot suspects that critics have called a “license to kill.”

While mimicking the National Front on issues of immigration and social policies, Sarkozy steers away from Le Pen’s protectionism in the realm of economics. In 2008-2009, Sarkozy undertook the role of public crusader for the “moralization” of capitalism in different world summits, from the G20 to Davos. Yet he has never applied his calls for more regulation and neo-Keynesian policies to France or to his joint stewardship of the European debt crisis with German Chancellor Angela Merkel.

The Future of Austerity

Hollande, on the other hand, may not have a radical economic program sufficient to the task of reforming the French and European financial systems, but he diverges from Sarkozy in one key aspect: government spending. Against Sarkozy’s line of austerity, Hollande proposes a more Keynesian plan of job creation in the public sector, indexing the minimum wage to GDP growth rather than just inflation, and public investment.

Sarkozy’s campaign team has repeatedly called Hollande’s government spending measures irresponsible, invoking the specter of France’s neighbors’ demise. “Let’s look at what is happening in Spain and Greece after years of socialist government,” warned Sarkozy lieutenant Nathalie Kosciusko-Morizet. “Today, it’s a meltdown. This is what we want to avoid for France.” Hollande retorts that he is merely echoing the analysis of economists worldwide who are condemning Europe’s austerity cure as suicide. The Socialist candidate announced that he would refuse to ratify the EU budget pact unless it contained an addendum in the form of a “growth pact.” Such a pact, he argues, should create low-interest euro-bonds to finance European investment projects and a new tax on financial transactions.

Angela Merkel repeated recently that the EU budget pact — the austerity agreement that Sarkozy signed at the beginning of the year along with 24 other European leaders — was non-renegotiable. But it is questionable whether she will be able to maintain a hard line without the support of the French president. On the evening of the first round, when Jean-Luc Melenchon enjoined his electorate to vote for Hollande next Sunday, he stressed that beating Sarkozy was not only critical nationally but was also a question of European solidarity: “This is about turning the tables, reversing the trends that keep all the peoples of Europe under the yoke of the Sarkozy-Merkel axis,” he told the crowd.

A Hollande victory would tip the balance of power in Europe and put an end to the hegemony of the austerity paradigm. “If our presidential election is followed so closely,” Hollande told Sarkozy during their face-to-face debate, “it’s because the stakes go beyond ourselves.” He declared that citizens and governments alike were eager “to know who the next president will be and whether he will have the will to change Europe’s orientation, if he’ll have the capacity to influence Germany, if he’ll have the necessary strength to launch a stimulus plan on the European scale.”

Francois Hollande is not in the lineage of the Occupy movement, nor does he present a true alternative to the finance-dominated system that precipitated the economic crisis. In fact, in an interview with The Guardian, he famously reassured international finance about the ultimate innocuousness of his brand of moderate leftism: “You could say Obama and I have the same advisers. … [T]he left was in government for 15 years in which we liberalized the economy and opened up the markets to finance and privatizations. There is no big fear.”

Tipping the balance of power and shifting the dominant economic ideology in the EU might not be enough to ensure more social justice. But the demise of the austerity agenda would be a welcome first step — and open a new window for resistance.

Jeanne KayJeanne Kay is a contributor to Foreign Policy In Focus and a former intern with the Institute for Policy Studies.