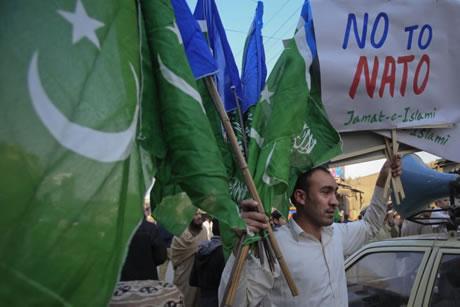 Protest in Pakistan against NATO

Unless there is a decisive turn in events, Washington might be getting closer to losing a powerful ally in a much-troubled and highly strategic region.
By Richard Javad Heydarian | December 23, 2011 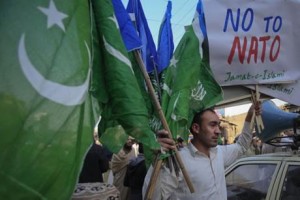 Protest in Pakistan against NATO

As the United States struggles to stabilize the volatile landscape in Afghanistan, assert a long-term strategic presence in Iraq, and contain Iran’s nuclear ambitions, it is gradually confronting a precarious and consequential estrangement from its long-term strategic ally, Pakistan.

With rising dissatisfaction among the Pakistani political elite and growing popular anger against America, Washington is on the verge of losing another vital ally. After a decade of compliant and subservient partnership—coupled with endemic corruption and a severe economic downturn—the Pakistani leadership might face the same fate as other fallen pro-U.S. leaders across the Middle East, from Iran’s Shah in 1979 to Arab autocrats in Egypt and Tunisia in 2011.

But Pakistan is uniquely important, not only for its sheer size, geopolitical position, and powerful army, but also because it possesses one of the world’s most potent nuclear arsenals.

For decades, Pakistan has been the backbone of America’s strategic designs in South and Central Asia. During the Cold War, Islamabad was the main U.S. buffer against Soviet expansionism. In the 1980s, Pakistan’s unremitting cooperation was a key element of U.S. efforts to push the Soviets out of Afghanistan. It was precisely such close strategic partnership that encouraged America to turn a blind eye to Pakistan’s burgeoning nuclear program and A.Q. Khan’s plethora of proliferation shenanigans across the continent.

In the post-Cold War era, Pakistan’s continued pivotal role in America’s regional designs discouraged any serious rhetorical or diplomatic censure in the wake of General Pervez Musharraf’s military takeover of the country, which ended, albeit temporarily, an era of unstable and corrupt civilian politics. After all, Musharraf was simply exposing the real character of the Pakistani political system: the intractable dominance of a generally revered military establishment, which views itself as the guardian of the Pakistani state – mainly against India’s perceived expansionism.

The military remains the backbone of the Pakistani state, exerting influence on all major organs of the government, especially in the realm of foreign and domestic security policies. It receives around a quarter of the national budget and has historically blocked any attempt by civilian politicians to change the country’s domestic political system or foreign policy architecture. When former Prime Minister Nawaz Sharif contemplated normalizing relations with India, he was ousted by a coup. The military was also swift in removing Pakistan’s ambassador to Washington Husain Haqqani, who allegedly prepared a memo calling for a U.S.-backed “coup” against the establishment. President Zardari’s plans to improve economic relations with India might secure him a similar fate.

The post-9/11 era witnessed a renaissance in Pakistani-U.S. relations. The strategic and security-intelligence exigencies of the so-called Global War on Terror (GWOT) proved a sufficient basis for further cementing bilateral ties. Initially, both countries seemed to share a common enemy: fundamentalist movements and extremist organizations. They were jointly confronting the menace of the very same “freedom fighters” they had sponsored and supported during the Soviet occupation of Afghanistan—the Frankenstein monster of their own making. However, it was precisely this revival that paved the way for a series of crises that are increasingly hounding Pakistan and its alliance with America.

An Alliance of Convenience

A profound strategic gap divides the United States and Pakistan. Although Washington’s main interest has centered on eliminating extremist elements in the region and creating a stable, pliable, and democratic Afghanistan, Islamabad’s calculations have focused on counterbalancing an increasingly ascendant India. Pakistan is also concerned with leveraging its alliance with the United States – enjoying around $20 billion in military aid in the last decade – and increasing its strategic depth in Afghanistan.

Washington seems to have overlooked this crucial security dilemma, which has guided Pakistan’s strategic calculus since its very inception. The underlying U.S. assumption was that Pakistan would be content with Washington’s continuous aid and political support even as the battle against extremist elements intensified in scope and cost.

But over the years, the underlying differences inevitably came to the fore. For Washington, Pakistan’s double game of funding, training, and sponsoring the Taliban and other insurgent Pashtun forces on the one hand, while aiding America’s efforts in Afghanistan on the other, has become intolerable. America’s sense of betrayal was magnified when it discovered that its number-one enemy, Osama bin Laden, had been residing in the vicinity of Pakistan’s elite military academy for years. Not only were Osama’s whereabouts unreported, but he also went undisturbed for years, despite America’s continuous and desperate efforts to hunt al-Qaeda’s elusive chief.

Unsurprisingly, Washington presumed that the Pakistani military had been all the while providing cover for the world’s leading renegade, as well as other extremist groups. This sentiment was evident in Adm. Mike Mullen’s inflammatory comments before the U.S. Senate, when he said that Pakistan was using “extremism as an instrument of policy” and that the deadly Haqqani network was “a veritable arm of Pakistan’s Internal Services Intelligence Agency.” U.S. Secretary of State Hillary Clinton echoed Washington’s deep sense of outrage, warning Islamabad that “No one should be in any way mistaken about allowing this to continue without paying a very big price.”

No wonder President Obama ordered Osama’s assassination without even informing his Pakistani counterparts. But America’s unilateral action on Pakistani soil, which constituted a clear violation of the country’s sovereignty, understandably enraged the Pakistani establishment. Since then, bilateral relations have rapidly spiraled downward.

Recent years have also witnessed an increasingly cozy relationship between Tehran and Islamabad, illustrated by a growing number of bilateral agreements and high-level diplomatic interaction. Pakistan has been visibly increasing its economic cooperation with Iran, mainly in the energy sector. The proposed IPI pipeline, which passes through Pakistan, could immensely strengthen Iran’s position in Asian gas and energy markets. This would further deepen Tehran’s influence in Central and South Asia, while ameliorating the impact of sanctions on the country’s increasingly beleaguered economy.

Despite vehement U.S. opposition, Pakistan has decided to push through, and even hasten, the construction of its portion of the IPI pipeline, which is expected to come online by 2014. Iran could earn around $3 billion in annual revenues, while Pakistan would be able to address its growing energy needs.

Strategically, Iran and Pakistan share an interest in stabilizing the porous borders in the restive areas of Baluchistan, which hosts insurgent and separatist movements in both countries. Recently, the two countries were able to coordinate the reopening of the Zero-Point trade gate in the volatile Taftan area of Chagai district in an attempt to ease border tensions and facilitate economic exchange. In light of Pakistan’s growing economic woes, Iran has also emerged as an important supplier of electricity, energy, and even foreign aid in moments of crisis like the flooding that has ravaged parts of Pakistan.

The growing U.S. embrace of India as an emerging economic and political powerhouse has also annoyed the Pakistani authorities. Faced with an America that is increasingly preoccupied with economic considerations, Islamabad has witnessed a qualitative shift in India-U.S. relations. On top of the sale of U.S. military hardware and provision of civilian nuclear technology assistance to India, President Obama’s endorsement of New Delhi’s bid for a permanent seat at the United Nations Security Council has clearly slighted many U.S. partners in Pakistan, who have already watched India’s growing influence in Afghanistan with considerable alarm.

Pakistan is also losing interest in supporting U.S. efforts in Afghanistan for purely domestic reasons. The country’s alliance with the United States has created considerable popular backlash, which has intensified in light of increasingly deadly American drone attacks in heavily populated areas. These drone operations have intensified exponentially under Obama’s watch. The latest Pew Survey suggests that only 12 percent of Pakistanis express a favorable view of America, making the country among the most anti-American nations in the world.

Recently, Pakistanis held massive rallies in Lahore and Peshawar in condemnation of the killing of 24 Pakistani soldiers by NATO forces. The rallies also expressed the public’s support for the Pakistani military. With around 67 percent of Pakistanis agreeing that the United States is Pakistan’s “greatest enemy,” it’s also not surprising that the regime in Islamabad is facing a growing domestic insurgency.

With the Pakistani Taliban and other fundamentalist organizations stepping up their operations against military and civilian establishments, Pakistan is increasingly rocked by extremist violence. Most alarmingly, there is an increasing threat of a takeover of Pakistan’s nuclear arsenal by emboldened extremist forces. The country is sliding into a state of chaos, and some analysts are already talking about it as a potential failed state. The country is simultaneously grappling with political instability, streams of bombings, an economic meltdown, and unprecedented natural disasters. In the end, the relatively intact, coherent, and capable Pakistani military may decide to step in and take power in a formal coup.

Recent months have seen U.S.-Pakistan relations reach an all-time low. America’s recent bombing of Pakistani military posts, leading to the death of 24 Pakistani soldiers, marked a dangerous escalation in an already tense and precarious alliance. Pakistan’s response was swift and unequivocal. It condemned the attacks, closed border crossing points, and boycotted the Bonn Conference on Afghanistan. The country has also warned America against further unauthorized drone attacks, threatening military retaliation if Washington fails to comply, and forced the United States to vacate the Shamsi air base, which it had used to stage drone operations.

Alarmingly, tensions are increasingly reflected in the public statements of top officials. In a recent interview with the BBC, Pakistani Prime Minister Yousaf Gilani admitted that the United States and Pakistan “do not trust each other.”

Given the depth of America’s strategic anxieties in the region, its ongoing estrangement from Pakistan is a dangerous blow to its interests. Further deterioration could spell the end of the alliance. Pakistan could ultimately turn to China, Iran, and Russia if it deems its partnership with Washington a drag on its national interests. Indeed, Islamabad may already be hedging its bets by pushing for full membership in the Shanghai Cooperation Organization, which is commonly portrayed as an Asian counterpart to the North Atlantic Treaty Organization.

Unless there is a decisive turn in events, Washington might be getting closer to losing a powerful ally in a much-troubled and highly strategic region. America’s next steps are crucial if Washington seeks to salvage the fading alliance.